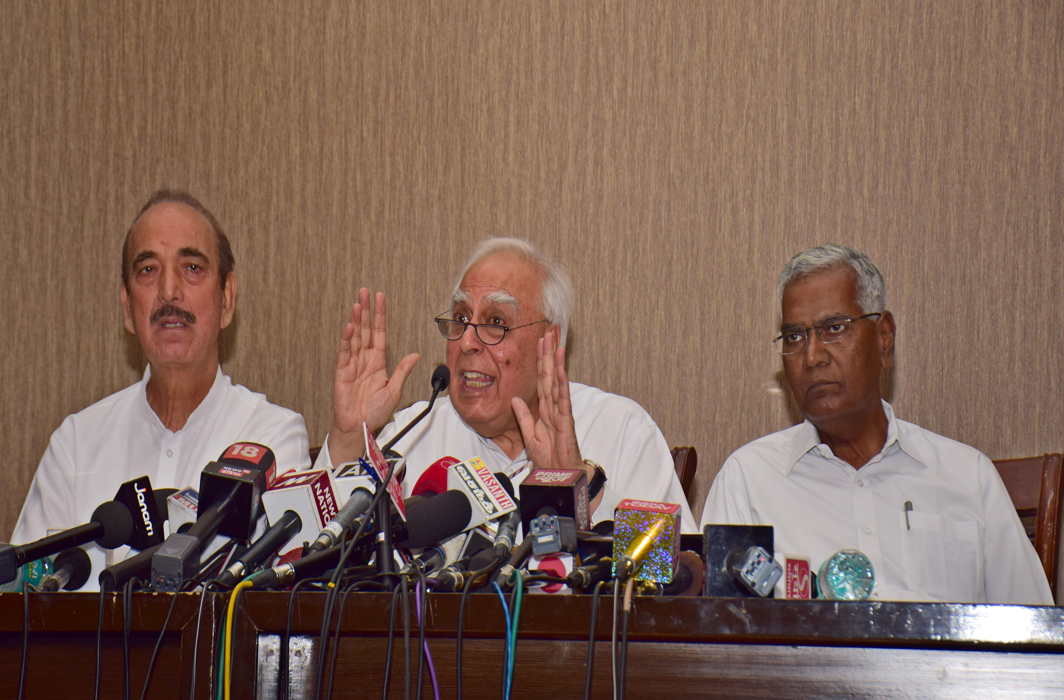 The motion for removing the chief justice of India from office has created a great deal of excitement in political and legal circles. Most of the reactions are in favour of the chief justice and against the movers of the motion. The ruling party spokespersons’ fulminations against the Opposition are so wild that they seem to believe that this motion is the most horrendous thing that has happened after the Second World War. The tendency of Indian politicians and political spokesmen to overreact is well-known. But the unbalanced “political” react-ions of professionals and self-styled constitutional experts are truly astounding.

The Constitution vests in Parliament the power to remove a judge, including the chief justice of the Supreme Court and high courts. This is the position in most democratic countries. Not only the chief justice, but even the president is removed from office by Parliament. So there is nothing extraordinary about some MPs giving notice of a motion to the chairman of the Rajya Sabha, seeking removal of the chief justice. Many judges have been sought to be impeached in the past, although the actual removal did not take place.

The procedure laid down in the Constitution and the Judges (Inquiry) Act for the removal of a judge is cumbersome. The idea is that the removal of a judge should not be lightly attempted. The process starts with the submission of a motion containing charges against the judge by the requisite number of MPs to either the speaker of the Lok Sabha or the chairman of the Rajya Sabha. A motion in the Rajya Sabha needs the signature of 50 MPs and that in the Lok Sabha 100. The first stage of the process of impeachment is completed when the presiding officer admits or rejects the motion. The motion is admitted when he finds that it contains charges which, if proved, would constitute “misbehaviour”.

Under Article 124(4) of the Constitution, a judge is removed from office only due to proved misbehaviour or incapacity. If the presiding officer finds that the charges made in the motion are not grave and that they would not constitute misbehaviour, he can refuse to admit it, in which case, the matter will end there. If, on the other hand, the motion is admitted, the presiding officer will appoint an inquiry committee consisting of a judge of the Supreme Court, a judge of one of the high courts and a distinguished jurist. These distinguished men are selected usually in consultation with the chief justice of India.

This committee investigates the charges and gives its findings in a report which is submitted to the presiding officer concerned. Thereafter, the motion which was kept pending, together with the inquiry report will be placed in the House. If the House votes with the requisite majority, which means majority of the total membership of the House and two-thirds of the members present and voting, the motion will be passed. The same exercise is done in the other House too. Thereafter, each House will present an address to the president seeking the removal of the judge, who then passes the order.

The 21-para-long order passed by the chairman, Rajya Sabha, refusing to admit the motion has almost ended the exciting impeachment exercise. It must be stated here that the law vests in him the discretion to admit or not admit the motion. Neither the Judges (Inquiry) Act nor the rules framed under it have clear guidelines as to what factors should guide him. The Act merely says that he may consult experts of his choice and examine the material available to him before deciding on the fate of the motion. The observation of the Supreme Court in Krishnaswamy’s case quoted in the order in para 5 gives some idea about what the presiding officer should look for in such a situation. 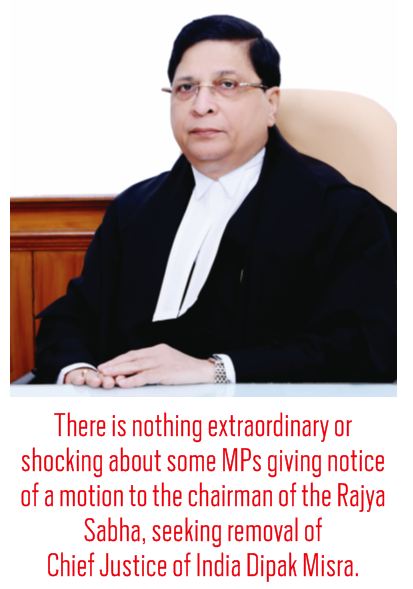 The Supreme Court says that he should not look for a prima facie case nor should he try to weigh the pros and cons. It also says that there should be a factual foundation. Finally, the Court says that he should keep in mind the seriousness of the imputations, nature and quality of the record before him and its “indelible chilling effect on the public administration of justice and independence of judiciary”. It must be confessed that these observations of the Court create real difficulty for a presiding officer who sits down to decide the admissibility of the motion.

That is precisely why the order looks for “proved misbehaviour” in para 10 before the process of admission is undertaken. As a matter of fact, misbehaviour is proved by the inquiry committee. Before that stage is reached, it is not possible and it is not required to prove misbehaviour. A careful reading of the observation of the Supreme Court in the Krishnaswamy case would show that the presiding officer need not even weigh the pros and cons of the evidence for finding a prima facie case.

There is also no question of proving the charges beyond a shadow of doubt at the stage of admission. What the Supreme Court requires the presiding officer to do is to ascertain whether the imputations have a “chilling effect on the public administration of justice and independence of judiciary”. The officer, according to the Constitution, is neither a quasi-judicial nor an administrative authority, but a constitutional one who will look at the larger picture of public administration of justice.

When the dust settles, the parliamentarians need to take a fresh look at this law. The power vested in the presiding officers of Parliament to admit or reject a motion signed by a substantial number of MPs seeking the removal of a judge is unnecessary. The charges against the judge are to be investigated by the committee of judges and jurist. So, what kind of investigation can be done by a presiding officer who is not judicially trained? Proving a charge is a judicial function which cannot be performed by the presiding officers of Parliament.

Compare it with the constitutional provision on disqualification of MPs. A mere letter sent to the president by a citizen saying that his MP has incurred disqualification can be sent by the president in no time to the Election Commission which investigates the matter and gives an opinion to the president, who then acts on it. The Election Commission is equipped to investigate it. Similarly, the judicial committee constituted by the presiding officer of the House investigates the charges and gives its definite findings. So an investigation by him at the preliminary stage of the charges against a judge made by a substantial number of MPs makes no sense.

These presiding officers are politicians with strong party affiliations. This provision in the Act is not in consonance with the constitutional scheme. Article 124(5) provides for a law for regulating the procedure for investigation and proof of the misbehaviour or incapacity and for presenting an address to the president. It does not envisage any role for the speaker or the chairman of the Rajya Sabha. Quite so, because they can have no role in the investigation as they are not equipped to perform this task. Therefore, the admission or rejection of a motion containing charges against judges should not be entrusted to them. Whenever a motion is given notice of by the requisite number of MPs, the speaker or the chairman should constitute the committee and refer it in the same way the president forwards a complaint about an MP to the Election Commission. The Judges (Inquiry) Act should be amended on these lines to correct the distortion in this law.

—The writer is a former Secretary General of the Lok Sabha 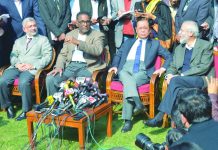