Hungry kya? Food often sets our heart racing with excitement. But, wait. It may not be safe. Pause for a moment before you eat. Are you sure about the contents of your meal?

Here are some imminent dangers: Your chicken fry might contain some harmful antibiotics. The rice biryani might have mercury and aluminium phosphide from tablets that are used as fumigants in rice bags and are poisonous. The silver leaf on sweets may contain an animal residue.

Okay, you like to avoid sugar and opt instead for fruits. But it could have been ripened with carcinogenic calcium carbide. You want to finally sip some tea. But it could have iron filings that are sometimes mixed with the tea leaves when it is cut by iron rollers.

The milk in the tea could have chalk, urea and even soap. It could lead to kidney stones.

After reading this, you may not be hungry anymore. Adulteration has become a thriving business in India, putting our health at risk. But there is hope round the corner.

The Law Commission has now recommended that if someone dies consuming adulterated food or drinks, the punishment for the guilty will be enhanced from six months to life imprisonment under Sections 272 and 273 of the IPC. It recommended that non-grievous injury caused by adulteration could attract a jail term of one year and a fine of Rs 3 lakh. If it results in a grievous injury, it could lead to a jail term of six years and a fine of Rs 5 lakh. And if the person dies, it can lead to life imprisonment and a fine of Rs 10 lakh. These recommendations have been forwarded to the Supreme Court.

In fact, the Supreme Court had asked the Commission to give its view if the centre was required to revisit the Food Safety and Standards Act, 2006, which incidentally, is the single reference point for looking at food and safety standards. Interestingly, while listening to a PIL last year, the Supreme Court had favoured a life term for offences to those adulterating food that proves fatal. 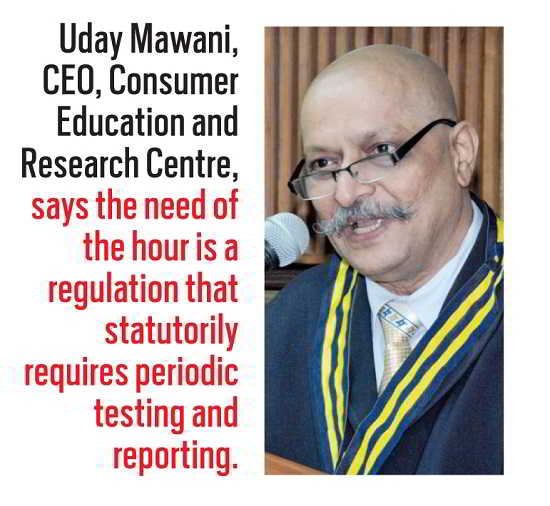 In the case of iron filings in tea, these are usually removed by the manufacturers with the help of magnets. But some particles get left behind. The Consumer Education and Research Centre (CERC) in Ahmedabad cautions that an iron overload could upset the stomach, result in organ damage and even death.

Recently, the centre, which is a credible consumer pressure group, wondered why the Food Safety and Standards Authority of India had increased the permissible limit for iron particles in tea powder to 250 mg/kg from 150 mg/kg.

Uday Mawani, CEO, CERC, said: “The Law Commission’s recommendations are a welcome move as adulteration affects all categories of consumers, especially the poor and vulnerable. Consuming adulterated food is like a double whammy as medical bills go up and disposable income for consumption drops even more. It affects their quality of life even further.”

In 2014, the Centre for Science and Environment had discovered antibiotic residue in chicken samples collected from Delhi and the National Capital Region. These antibiotics are fed to chicken to treat for possible infections of their urinary tract, respiratory tract, eye and ear, blood stream, diarrhoea and tuberculosis. As we all know now, continued exposure to antibiotics could end up in anti-microbial resistance that ultimately leads us to battle superbugs that have no cure.

Wanting to make a quick buck, fruit vendors use calcium carbide, commonly referred by them as “masala” to induce quick ripening of fruits within hours. Though this is banned, it continues on the sly as there are hardly any checks. Calcium carbide is carcinogenic and can cause mouth ulcers, gastric irritation, food poisoning and death.

Food dyes are one of the most widely used and dangerous additives. Your fav-ourite funky blue cocktail could damage your brain and kidneys. Experts say blue colour is known to cross the blood-brain barrier and cause permanent damage over time. Red and green colours are known to cause tumours in the bladder and testes and yellow can trigger hyperactivity in children.

A recent study by the Maharashtra Food and Drug Administration found that 20 percent of milk sold in the state continues to be adulterated. Some had used just tap water which contains impurities. But it isn’t as if bottled water is pure. A study by CERC of 13 leading brands had earlier shown that 10 had foreign objects floating in them, while two contained heavy metals which are toxic.

We just have to watch what we eat. Sugar can have tiny chalk crystals, and salt, powdered stone. Chilli powder can have brick powder, while coriander powder, sawdust or even powdered cow dung. Honey can contain jaggery syrup. Mouth-watering barfis can have harmful dyes and colours that cause cancer, while cumin seeds, coal particles and sooji, coloured sawdust.

Mawani says: “Producers must get their products tested for adulteration from independent laboratories. What we need is a regulation that statutorily requires periodic testing and reporting.”

The Supreme Court is now considering the recommendations of the Commission. Consumer activists feel that life term for food adulterators may be a deterrent.