As five states go to the polls, alliances are being formed and hard bargains driven in an effort to surge ahead and be in the reckoning for the Grand Fight in 2019

The stage is all set for the grand fight between the BJP and other parties as the Central Election Commission recently announced the poll schedule for Madhya Pradesh, Rajasthan, Chhattisgarh, Mizoram and Telangana. Voting will take place between November 12 and December 7 and results will be announced simultaneously on December 11.

The assembly polls will be followed within four months by the Lok Sabha elections, scheduled in April-May. As such, a decisive defeat of the BJP, which rules three of these five poll-bound states, would be brandished by the combined Opposition bloc, its factional feuds notwithstanding, as a referendum against the common enemy—Prime Minister Narendra Modi and the BJP. A saffron victory would put Modi and his alter ego, BJP president Amit Shah, at their aggressive best. The non-NDA Opposition parties will be forced to grudgingly set their personal ambitions aside and form a rainbow coalition to prevent resurgence of the saffron tsunami that devastated them in 2014.

For now, opinion polls predict an up­set for the BJP and a resurgence of the Congress in Rajasthan, Madhya Pradesh and Chhattisgarh—all traditionally bi­polar states which are now under saffron rule. Here, other Opposition parties like Mayawati’s Bahujan Samaj Party and Akhilesh Yadav’s Samajwadi Party have limited or no legislative presence. The Congress’s central leadership under Rahul Gandhi had hoped to use these states as a test case for the “mahagathbandhan” experiment by securing an alliance. However, hard bargaining by Mayawati and the reluctance of state Congress leaders to cede the party’s bastions to the BSP have jeopardised Gandhi’s ambitions.

There’s also an interesting inside story about the reasons for the failure of talks with Mayawati and Akhilesh. “Madhya Pradesh, Chhattisgarh and Rajasthan are among the few bipolar states left with the BJP and Congress as the key players. At a time when the Congress is in a position to win these states on its own, letting the BSP and SP increase their footprint in our strongholds through an alliance would have cost us dear in the long run,” a senior Congress leader told India Legal.

He explained: “Our internal surveys so far show that we could narrowly win Madhya Pradesh and Chhattisgarh and sweep Rajasthan without an alliance. Victory would enhance our bargaining power in the Lok Sabha polls for which we remain serious about a mahagathbandhan. An alliance with the BSP and the SP may have resulted in a more comprehensive victory for us, but would have given these parties cause to seek an unrealistic number of seats in the Lok Sabha polls. It would have affected our chances of demanding the prime minister’s post should the grand alliance win in 2019.”

The BJP has been in power in Madhya Pradesh and Chhattisgarh for the past 15 years. Both the respective chief ministers, Shivraj Singh Chouhan and Raman Singh, enjoy a mass base. The Congress has no leader with a pan-Chhattisgarh base. In Madhya Pradesh, it has a problem of plenty and is beset with factional feuds between state unit chief Kamal Nath, campaign committee chief Jyotiraditya Scindia, former chief minister Digvijaya Singh, former Union ministers Suresh Pachauri and Arun Yadav, and Leader of Opposition Ajay Singh.

However, the uninterrupted 15-year rule of the BJP has also given rise to heavy anti-incumbency. Factional feuds have surfaced in the state units with several leaders viewing Raman Singh and Chouhan’s long stints as detrimental to their own ambitions. There are also issues of corruption, farmer unrest, economic devastation, unemployment, crumbling infrastructure and Left-wing extremism (in Chhattisgarh) which the BJP is finding hard to counter.

“We are positive about our victory in Madhya Pradesh and other poll-bound states. People are fed up of the chief minister’s false promises and the high level of corruption in his government. Everywhere I travel, I see common people protesting—against unemployment, rising prices, agrarian issues, State atrocities against the marginalised communities. They want a change and they want the Congress to come back,” clai­med Madhya Pradesh Congress chief Kamal Nath to India Legal. 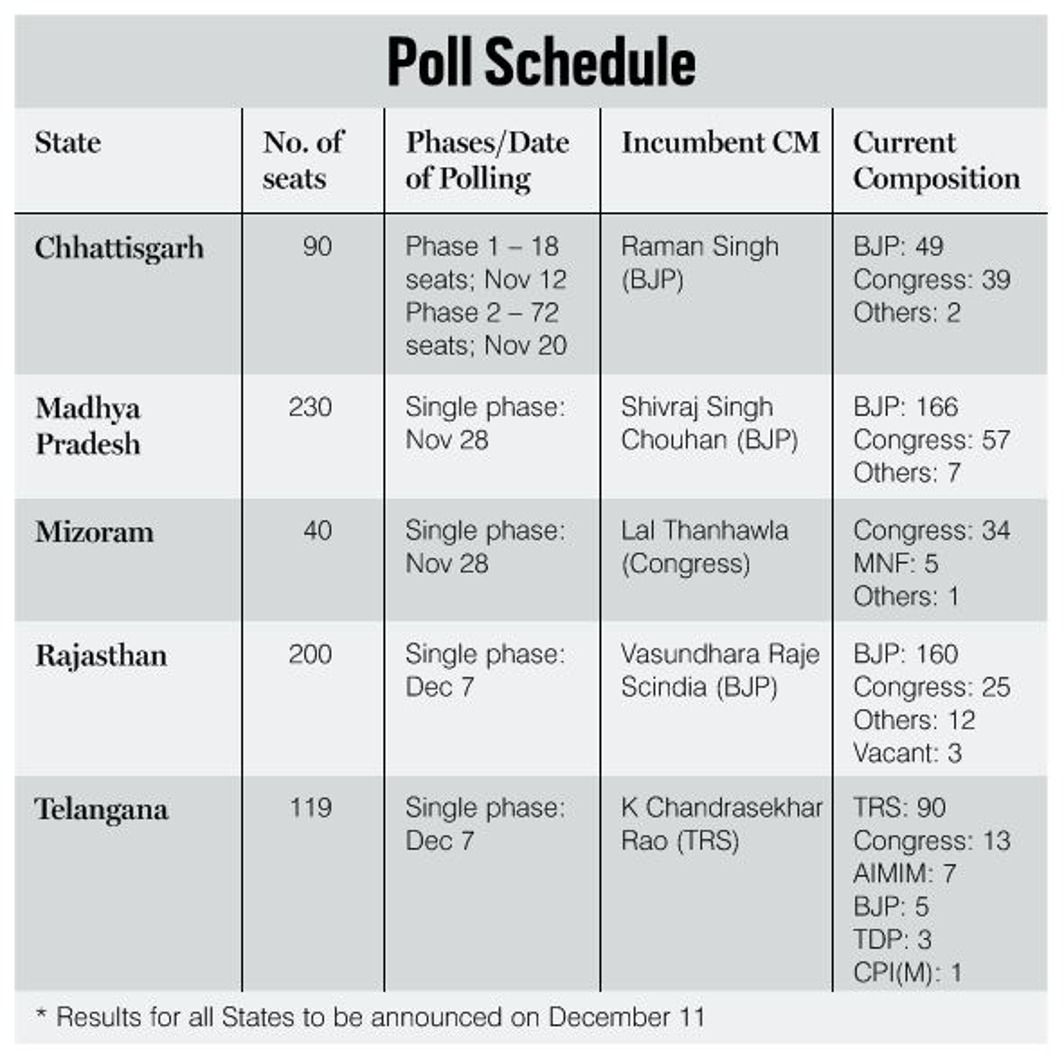 Nath didn’t seem worried about the failure of alliance talks with the BSP and its repercussions on the Congress’s chances of victory. “The Congress holds Mayawati in high esteem. Our national president has also said that talks with the BSP and SP for an alliance in 2019 will continue. However, state elections are different. The BSP has its pockets of influence in Madhya Pradesh and a steady 5-7 percent vote bank in these areas. We will try to reach an understanding on these seats,” he said.

For now, the BJP seems relieved at the “predictable death of the mahagathbandhan” and is hopeful of its own victory. The BJP national general secretary and heavyweight from MP’s Indore, Kailash Vijayvargiya, told India Legal: “The Congress is a spent force. The failure of Rahul Gandhi to win a single election for the party is well-known, but despite their repeated defeats, they have not shed their arrogance. Look at what happened with their alliance talks. They wanted to stitch an opportunistic alli­ance only to defeat the BJP but couldn’t even manage that. We have a good governance record to show to the voter and are confident of winning again.”

Opinion polls have shown that though Raman Singh remains a favourite with voters, his party’s popularity is waning. The problem for the Congress in Chhattisgarh, however, is that the only leader it had who enjoyed state-wide popularity—former chief minister Ajit Jogi—has now formed his own outfit, the Janta Congress, and will contest in alliance with the BSP. All other popular Congress leaders—Vidya Charan Shukla, Mahendra Karma and Nand Kumar Patel—were killed in a Maoist ambush in 2013 which Jogi narrowly escaped. Ever since, the party hasn’t been able to project a face acceptable across the tribal-dominated state. However, its Leader of Opposition in the assembly, Surguja royal TS Singh Deo, remains hopeful.

“We have a strong base across Chhat­tisgarh and voters are fed up of the Raman Singh government. The issues of corruption, left-wing terror in the southern districts, poor governance and autocratic rule that we have been raising have found favour with the voters. As for Ajit Jogi and his alliance, I don’t think it will have any adverse impact except maybe in a handful of seats but we are already working on countering such an eventuality,” Deo told India Legal.

In Rajasthan, a state which traditionally votes out an incumbent government every five years, Chief Minister Vasundhara Raje of the BJP is facing strong anti-incumbency and no longer enjoys support of either the central leadership of Modi and Shah or her party’s state cadres.

The Congress under state unit chief Sachin Pilot has been making an impressive revival, but his ambitions of becoming chief minister clash with those of Ashok Gehlot, a former CM and arguably the most powerful national general secretary of the Congress under the Rahul Gandhi dispensation. Gandhi is making every effort to ensure that Gehlot and Pilot don’t work at cross-purposes.

In Telangana, where there is a caretaker government at the moment under Chief Minister K Chandrasekhar Rao, the Congress is eyeing an alliance with Left parties and N Chandrababu Naidu’s Telugu Desam Party (TDP) to trounce the ruling Telangana Rashtra Samiti. The BJP, a bit player in the state’s politics, is hoping for either an alliance with Chandrasekhar Rao’s TRS or YS Jaganmohan Reddy’s YSR Congress.

Five years ago, the Congress had hoped that by bifurcating Andhra Pradesh following a violent and long-running agitation supported by Rao and his TRS, it was ensuring that Telangana would remain its bastion. Talk of TRS merging with the Congress following creation of the new state was commonplace in political circles then. Rao, however, pulled a fast one on the Grand Old Party and now remains the Congress’s biggest rival in the southern state and a favourite for the chief minister’s role. This is despite allegations of corruption and running the state as his fiefdom by keeping important portfolios for himself, his son or other relatives. The Congress foolishly tried to rope him into the grand alliance, but Rao seemed more amenable to truck with the BJP.

In Mizoram, the only Congress-ruled state going to polls, the BJP is hoping to stitch an alliance with regional outfits like the Mizo National Front (MNF) to oust Chief Minister Lal Thanhawla and effectively wipe out the Congress from the Northeast region. The Northeastern states, as the last five years have amply shown, tend to vote for a coalition/party that rules the centre as they are largely dependent on central funds. Cases of defection, at times of an entire legislative bloc (remember Arunachal), to the formation that rules New Delhi are not uncommon. This alone is giving nightmares to the Congress despite Lal Thanhawla being a much-liked leader who has been CM for five terms. Winning Mizoram, even if the BJP’s own tally is of just a seat or two, is crucial in Modi’s 2019 scheme as he hopes the Northeast will collectively give the saffron front a clean sweep.

The results of the state polls will force all political camps to redraw strategy and sound the bugle for the 2019 poll waltz.