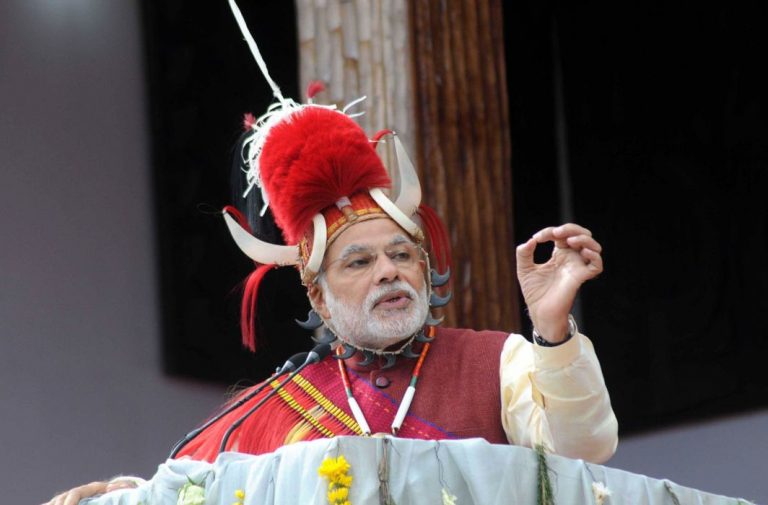 The Indian Constitution has special provisions for the protection of the cultural identities, customs, and economic and political interests of the original inhabitants of the North-East. Now, with the BJP’s electoral gains in the region, it will be performing a delicate balancing act

In Mizoram, a Christian religious sect called the Pu Chana pawl or just Chana, practises polygamy. The founder, a 66-year-old man, had 39 wives, 94 children and 33 grandchildren, all living under one roof. The Sema tribe, the Lotha and the Changs are also polygamous and it is customary for one wife to be given the status of head wife. Meghalaya is the only state in India which follows the matrilineal structure. After marriage, the boy moves to the girl’s house. The women are regarded as the key holders of the family wealth. The couple takes on the bride’s mother’s name as its official surname.

For the BJP, basking in its recent electoral expansion in the North-East, these are just some of the cultural and administrative differences that the party—widely seen as a north Indian outfit—will have to now get used to as it deals with its electoral allies and strives to establish a footprint among the seven sisters, as the North-Eastern states are called. Indeed, that will be the BJP’s biggest challenge and not the oft-quoted ones to do with the large Christian population in the region and the food ha-bits. The BJP has put its stamp across the North-East. Except for Mizoram, which goes to the polls at the end of this year, the saffron flag is flying high over Assam, Manipur, Tripura, Arunachal Pradesh and the Christian-dominated states of Nagaland and Meghalaya.

The challenge will be to take extreme care not to trample on the tribal rights enshrined in Article 244 of the Constitution. They come under the Sixth Schedule of the Constitution which is applicable only to tribes of the North-East. Much of this also covers self-governance and local councils which leaves state governments, local administrators and even the judiciary with limited powers. Despite these provisions, there is always fear that the dominant culture of the Indian mainland is eroding the tribal way of life. Political parties, especially regional outfits, play on the fear of “outsiders”. Much of the politics of the tribal states is centred around preservation of local customs and traditions. National parties, be it the Congress in the past or the BJP now, cannot afford to go against strong local sentiment over preserving their unique way of life.

Some of the measures to protect the tribals in the Sixth Schedule include “the Inner Line Permit’’ which Indians from other states have to obtain to visit Nagaland, Mizoram and Arunachal Pradesh. This is primarily to contain influx into tribal states. Special provisions for the creation of Autonomous District Councils in the tribal areas of Assam, Meghalaya and Tripura are also in place to secure the rights of the local population.

The state governments in Nagaland and Meghalaya, despite being in a coalition with the BJP, will make certain that anti-Christian agenda or the beef ban supported by the BJP-Sangh Parivar combine has no place in their states. This is why the BJP is being extremely cautious and will try not to alienate tribal sentiments.

The North-East has over 220 ethnic groups and an equal number of dialects. Even within tribal groups, there are degrees of diversity. The Sixth Schedule is entirely focused on protection of tribal areas and interests, by allowing self-governance through constitutional institutions at the district or regional level.

These institutions are entrusted with the twin task of protecting tribal cultures and customs and undertaking development. While the Schedule covers Meghalaya and partly the states of Assam, Tripura and Mizoram, areas and states not covered by its provisions—Arunachal Pradesh, Nagaland and Manipur—also have laws respecting the autonomy of traditional ways of self-governance and protection from outside interference.

A key feature of the Sixth Schedule is that it provides for administration of certain tribal areas as autonomous entities. The administration of an autonomous district is vested in a District Council and of an autonomous region in a Regional Council. These Councils are endowed with legislative, judicial, executive and financial powers. These constitutionally-mandated Councils oversee the traditional bodies of the local tribes such as the Syiemships and Dorbars of the Khasi hills of Meghalaya. They have complete freedom to allow village-level bodies to run according to customary laws. The verdicts of district and lower courts can only be challenged in the high court. Politically, it gives radical governance power to the tribal communities and recognises their traditional rights over local natural resources. It not only accepts the validity of “customary law, social and religious practices, and traditional management practices of community resources”, but also directs the state governments not to make any law which interferes with these.

Probably the most progressive law for tribal people after Independence, the PESA Act empowers the gram sabha (the council of village adults) and the gram panchayat to take charge of village administration. It empowers them to protect community resources, control social sector functionaries, own minor forest produce, manage water bodies, give recommendations for mining lease, be consulted for land acquisition, enforce Prohibition, identify beneficiaries for poverty alleviation and other government programmes and have a decisive say in all development projects in the villages. While there are some commonalities among ethnic groups of the region, each one also retains its distinct cultural, linguistic, religious and historical identity.

Against this is the RSS view that all religious communities living in the country must defer to the wishes of the majority Hindu community. Considering that the Church, which exerts enormous influence in both Nagaland and Meghalaya, is wary of the Hindutva brigade and believes Christians are under attack in Modi’s India, did citizens defy the Church to vote BJP?

The BJP in the North-East is more in the mode of a centre-right political party, shorn of its Hindutva avatar. It is almost unrecognisable from the BJP that won elections in Gujarat or earlier in UP and other northern states. It does not operate in Hindutva mode, but as a forward-looking, development-oriented party significantly different from the corruption-ridden Congress.

Ironically, most of the BJP candidates, especially in Meghalaya, are re-cent imports from the Congress and therefore a part of the malaise and not the solution. The biggest catch for the BJP was Assam’s Congress leader, Hi-manta Biswa Sarma, who defected to the BJP in 2015, ahead of the 2016 state elections. He was one of the main architects of the BJP victory in Assam.

Before he joined the party, the BJP had targeted him as one of the most corrupt politicians in the North-East. Now that he has switched, there is only praise for the man and no mention of his former corruption.

The BJP’s election campaign in Meghalaya, Tripura and Nagaland was mainly about development. Prime Minister Narendra Modi is a popular figure and a powerful orator. As in 2014, Modi sold the development agenda to the North-East, where development is at a snail’s pace and people are desperate for change. The Act East policy of the Modi government finds resonance among educated and aspirational youth of the region. Communal innuendoes or polarisation was not part of the BJP’s election tactics in the North-East, unlike in Gujarat or UP earlier. The RSS and the BJP sell the Hindutva card in Assam, and surreptitiously in Tripura, but not in the Christian states. Here, the party talks development and respect for the tribal way of life, meaning the cow slaughter ban will not affect the beef-eating population of the North-East.

Though the ban on beef has never been enforced in the North-East, stories of vigilante attacks on those transporting cows have reached the people and frightened them. Beef parties were organised by several political parties as a form of protest against cow slaughter. Many members of Conrad Sangma’s National People’s Party (NPP), now a major ally of the BJP, were principal movers of the protest.

The NPP had been part of the NDA but, seeing the strong feelings of people who thought a BJP government would impose the cow slaughter ban in the North-East, the party kept its distance from the BJP, at least publicly. Once the polls were over and the chief ministership offered, the situation changed.

The smaller regional outfits were easy to win over because tiny states like Meghalaya and Nagaland believe it is better to support the party at the centre. The hill states are entirely dependent on central funding. The BJP even has a minister in the Sangma government, though it won just two seats in Meghalaya. Will the BJP succeed in changing either the culture, food habits or Christian educational institutions of the North-East? This is not likely at the moment.

Apart from Assam and Arunachal, everywhere else the BJP is in coalition with local parties. In Manipur, where the BJP has been in power for a year, not much change is in evidence. “It is too early to judge. They have been in power for just about a year and the government is in a minority. They are desperate to show that they are different from the Congress, but so far have not been able to make much impact,’’ said analyst Pradip Phanjoubam. He adds that the Congress with 28 seats is still the largest single party. “So they are wary but hoping to break the strong base of the Congress party which is still intact.”

At the moment, the government is moving cautiously and does not want to upset the apple cart. Significantly, though the Imphal valley in Manipur is Hindu-dominated, the BJP has not played the Hindu card, mainly because the state also has a sizeable population of Christians in the hill areas.

Chief minister N Biren Singh, a former Congress minister who defected to the BJP, has won his elections from a mainly Muslim majority constituency. So neither talk of a beef ban nor anti-Christian or anti-Muslim rhetoric is heard from the BJP government  in Manipur.

In Nagaland and Meghalaya too, the BJP is unlikely to turn against local sentiment. So the beef ban will not be imposed here. Christian education institutions too will remain largely un-affected. Despite fears of fringe Hindutva groups about Christian institutions working at conversion of Hindu students in missionary schools and colleges, there will be no attempt to meddle.

Many of the North-Eastern politicians studied in missionary schools and are unlikely to try to undercut these institutions which have imparted excellent education to people of the region.

In the early years of insurgency in the region, the Congress governments at the centre, believing that the Church was encouraging independence from India, banned foreign priests and nuns from working in the North-East.

Instead, the Ramakrishna Mission and other Hindu charitable trusts were encouraged to go into Arunachal Pradesh and work among the people there. This ban still persists in Arunachal Pradesh.

For now the BJP is likely to keep away from religion and culture and concentrate on development, keeping in mind local sentiments.