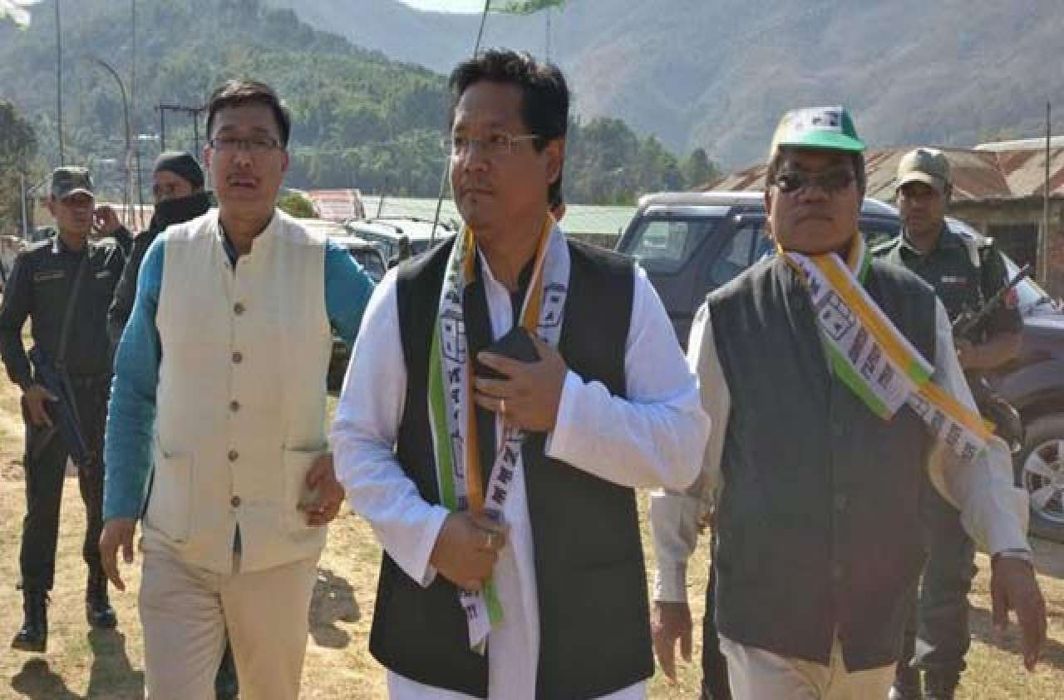 In scenario reminiscent of Manipur and Goa elections, despite emerging as the single largest party, Congress loses the number game for government formation

A sense of déjà vu must have hit the Congress leadership hard late on Sunday evening as its chance at retaining power in Meghalaya after emerging as the single largest party following Saturday’s assembly poll results was literally snatched away by the Conrad Sangma-led National People’s Party (NPP).

The BJP, which had comprehensively won Tripura and managed to storm in to power in Nagaland through its pre-poll alliance with the Nationalist Democratic Progressive Party (NDPP) but bagged only two seats in the 60-member Meghalaya assembly, will predictably be part of the NPP-led coalition. Becoming part of the Conrad Sangma-led Meghalaya government, the BJP squares off its high-pitched poll campaign in India’s north-east with its intended goal – resoundingly establishing its political dominance in a territory where till just five years ago it s vote share wouldn’t even go beyond two per cent.

For the Congress, Conrad Sangma’s ascension to the Meghalaya chief minister’s chair with the help of an opportunistic rainbow coalition of political expediency is reminiscent of the shrewd machinations by the BJP which cobbled together an alliance in Manipur and Goa last year to come to power despite the Grand Old Party having won greater numbers in the assembly polls to these states.

The Congress had appeared to be more proactive in Meghalaya than it was in Goa and Manipur. As soon as it became clear on Saturday that the state was heading towards a hung verdict, the party high command dispatched senior leaders Ahmed Patel, Kamal Nath and CP Joshi to Shillong.

However, the three veterans failed to persuade outfits like the United Democratic Party (UDP), Hill State People’s Democratic Party (HSPDP) and the People’s Democratic Front (PDF) – the three parties accounted for 12 legislators among them – to support the 20 Congress legislators led by outgoing chief minister Mukul Sangma for a shot at power. Had these outfits agreed – the UDP and HSPDP had anyway contested the polls in an alliance – and supported Mukul Sangma’s bid at retaining power, the Congress would have crossed the magic figure of 31 legislators required for a simple majority in the Meghalaya assembly.

Congress insiders, however, told India Legal that Patel and Nath were aware even before landing in Shillong that the possibility of stitching together a post-poll alliance in Meghalaya with Mukul Sangma at the helm would be an almost insurmountable task if the party’s tally was restricted to below 25 MLAs. The Congress’ march eventually stopped at 21 seats.

In the past eight years that Mukul Sangma was the state’s chief minister, he had managed to alienate leaders of the opposition outfits that the Congress’ central leaders now wanted to broker an alliance with. His authoritarian and arrogant working style had, in the past few months leading up to the elections, triggered resignations by several Congress loyalists including his deputy chief minister Rowell Lyngdoh and ministers Prestone Tynsong, AL Hek and Sniawbhalang Dhar. The NPP, BJP and other regional parties were only too happy to absorb these disgruntled Congress leaders who had massive grassroots support in their respective constituencies.

Congress sources told India Legal that Patel and Nath offered plum portfolios to leaders of regional outfits besides assuring them of other “advantages” of joining a post-poll alliance. However, these leaders made it clear to the Congress veterans that they were committed to seeing Mukul’s ouster and would rather be part of an alliance with the BJP as the saffron party had “more to offer to the state” as it also led the central government. As it became abundantly clear that efforts to broker a post-poll pact with the regional outfits were futile, Patel and Nath “fulfilled the formality” of meeting the state’s governor Ganga Prasad on Saturday night and requested him to invite Mukul Sangma as the leader of the single largest party to stake his claim for forming a government before flying back to New Delhi.

The BJP, which had already prepared its script for such a post-poll scenario even before the election for Meghalaya was announced, then began the final lap of its parleys with the regional outfits.

Though it bagged only two assembly seats in Meghalaya and a total vote share of a mere 9.6 per cent, the BJP became the glue that bound a non-Congress front led by Conrad Sangma’s NPP together. Himanta Biswa Sarma, the man who had quit the Congress two years ago after being “humiliated by Rahul Gandhi” and joined the BJP with the stated objective of ensuring that the Congress faces a rout in its traditional citadel of the north-eastern states, reached out to leaders of the UDP-HSPDP alliance. Though the UDP did not enter into a pre-poll alliance with the BJP, it was always clear that in case of a hung assembly it would align itself with the saffron party. The UDP is, in fact, a part of the BJP-engineered North East Democratic Alliance which is headed by Sarma. Sources said that Sarma was even instrumental in ensuring that the UDP-HSPDP candidates were not short of funds during the elections.

Unlike Tripura and Nagaland where the BJP did put in enormous effort, money and of course its characteristic skulduggery at winning seats, the saffron party knew that its chances of scoring a victory on its own in Meghalaya was not easy as the state still had a strong Congress presence. Sources say Sarma along with central BJP leaders Ram Madhav and Nalin Kohli had already reached an understanding with the NPP before the polls.

The NPP was founded by former Meghalaya chief minister late PA Sangma. PA Sangma had quit the Congress to co-found the NCP with Sharad Pawar. The NCP had gone on to join the Congress-led UPA in 2004 and 2009. PA Sangma had buried his grudge against the Congress and its then president Sonia Gandhi who had reciprocated the gesture by ensuring that his daughter Agatha served as a junior minister in UPA-II despite her obvious political and administrative inexperience. However, when his political ambitions resurfaced and egged him to challenge UPA’s presidential nominee Pranab Mukherjee, PA Sangma was forced to quit the NCP though Agatha continued in the party as well as the Congress-led UPA government. PA Sangma’s unsuccessful presidential bid had the support of the BJP and when he formed the NPP, his son Conrad – presently Lok Sabha MP from Meghalaya’s Tura constituency – and daughter Agatha, ensured that their political equations with the saffron party remained thick.

It was this political investment made by the BJP during PA Sangma’s presidential bid that Himanta Biswa Sarma, Ram Madhav and Nalin Kohli decided to cash when they approached Conrad for the post-poll alliance. Ambitious and with an axe to grind against the Congress, Conrad readily agreed and BJP ensured that when he approached the Governor on Sunday evening to stake claim to power, the NPP had the added support of not just the otherwise insignificant two BJP legislators but also of MLAs from the UDP-HSPDP alliance.Conrad will now have to resign from his Lok Sabha seat within six months of taking oath as the chief minister and be elected as an MLA in the Meghalaya Assembly. It is expected that his sister Agatha, the newly elected MLA from south Tura constituency will swap seats with Conrad; contesting the imminent Lok Sabha bypoll from Tura while Conrad fights the bye-election from south Tura assembly seat.

The BJP may have made genuinely impressive electoral strides in Tripura and Nagaland but its real political cunning is most evident in Meghalaya where now, with just two MLAs, it can still claim to be “in power”, while the Congress – despite being the single largest party – has to eat the humble pie and grace the Opposition benches, nursing its wounds till the next assembly polls, or perhaps till such a time when one of the several alliance partners of the soon-to-be-sworn-in Conrad Sangma government becomes disenchanted and decides to jump ship. Not an unlikely scenario in the north-east where entire legislative parties have been known to shift political affiliations overnight.