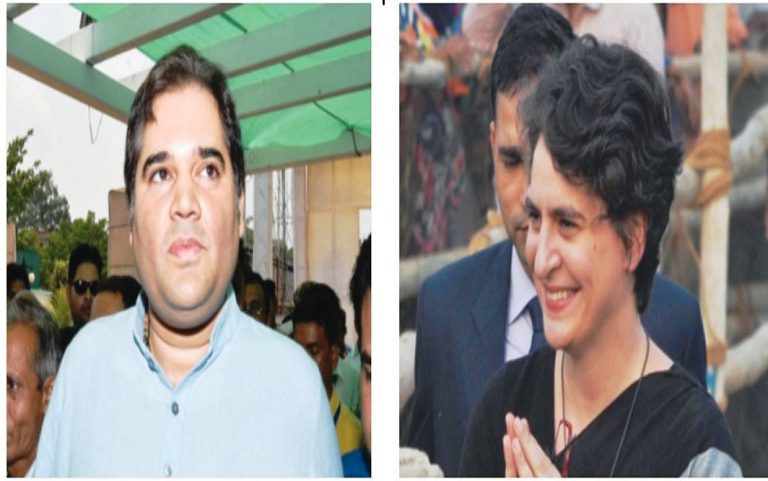 If the buzz in the corridors of 24, Akbar Road is anything to go by, Varun Gandhi may quit the BJP in the run-up to the general election due in April-May, citing the Modi government’s apathy towards farmers and marginalised communities as the reason. Congress insiders say that Varun would seek re-election from Sultanpur, adjoining the Nehru-Gandhi family’s pocket borough of Amethi and Rae Bareli, on a Congress ticket.

Even more interesting is the gossip around the political machinations of Maneka Gandhi. Her bitterness against Sonia Gandhi is often cited as the reason why the “Other Gandhis” continue to be in the BJP.

Varun has always maintained cordial relations with his elder cousins—Rahul Gandhi and Priyanka Vadra. It is believed that Varun’s homecoming is being carefully orchestrated by Priyanka. If things go as planned,

Varun may even get a chance to lead the Congress in central UP while Priyanka heads the campaign in the eastern districts.

The delay in Varun’s departure from the BJP is being attributed to some stringent conditions put forth by his mother. Maneka is willing to contest as an independent from her stronghold of Pilibhit provided the Congress, SP and BSP jointly support her candidature. She also wants an assurance that Varun will get important responsibilities in the Congress. Will Rahul agree and help re-unite the Nehru-Gandhi pack?

Israeli newspaper Haaretz reported that Ben-Shabbat flew on an Air India flight from Israel through Saudi airspace, which is one of the results of the understandings reached during Netanyahu’s previous visit to India where he bonded well with the Indian premier. Both share right-wing views on the “containment” of Islamists.

Defence analysts reveal that India is interested in an additional security deal with the Israeli arms industry. During Netanyahu’s previous visit, a deal was made to purchase anti-tank Spike missiles. According to official data from Israel, 58 percent of Israeli arms exports goes to Asian and Pacific countries. This number was greatly influenced by a deal between India and Israel Aerospace Industries for two billion dollars.

The Republic Day parade clearly was a massive tribute to Mahatma Gandhi, with nearly every tableaux dedicated to the Father of the Nation. However, there was also one clear irony that was writ large on the gala event. For a party that came to power promising a Congress-mukt Bharat, Prime Minister Narendra Modi’s BJP ensured that one of the lasting symbols of the Congress party of yore—the Gandhi topi—was firmly back in vogue, if only for the day.

Though the topi draws its name from the Mahatma, everyone recognises its staunchest patron to be the man Modi and Amit Shah love to hate—Pandit Jawaharlal Nehru.

While the current crop of Congress leaders seems to have tucked the topi away, sporting it only at events like the party’s plenary session or national executive meets, BJP governments—at the centre and in most states—ensured that the caps were on wide display on Rajpath, bringing back memories of the Nehruvian era. Among the few states that departed from the Gandhi-themed tableaux was Congress-ruled Punjab which revived its Jallianwala Bagh massacre theme to commemorate 100 years since the brutal killings.

Evidently, as Modi and Shah try to appropriate icons like the Mahatma and Sardar Patel for want of even a single founding father of independent India among the BJP’s own ranks, erasing the Congress’s legacy and symbolism is going to get tougher. What more could Rahul Gandhi want in these testing times of reviving the Congress’s fortunes?

Rahul Gandhi’s surprise announcement that if voted to power at the centre later this year, his party would ensure a Minimum Income Guarantee (MIG) for every poor Indian, has left the BJP stunned and proponents of fiscal prudence fuming. Gandhi’s Twitter announcement came days ahead of the Modi government’s presentation of its final Union Budget, on February 1, before the Lok Sabha polls.

There has been speculation that to beat the huge voter dissatisfaction it faces on account of growing unemployment, the Modi government is likely to break with convention and announce a full Budget instead of an interim one. A highlight of the fiscal statement could be declaration of a Universal Basic Income (UBI) scheme.

By pre-empting what the Budget may announce, Rahul stole some of the thunder from an obviously populist move. It also complements Rahul’s continued diatribe against the Modi government’s failure to tackle unemployment and poverty. Congress insiders say that Rahul’s discussions with economists—including the venerable Professor Arun Kumar who has been scathing in his criticism of Modi’s demonetisation and the GST rollout on macro, small and medium enterprises—on the blueprint for an MIG have been on for nearly six months. The Congress manifesto and vision document for the Lok Sabha polls is expected to have a detailed chapter on how the MIG will be rolled out. The manifesto committee, chaired by P Chidambaram, believes that a comprehensive MIG would be the party’s big ticket promise and be billed as the natural corollary to the UPA-era social outreach scheme, the MGNREGA.

It will be interesting to see if Rahul has sufficiently shocked the Modi government to hit back with a counter punch when Piyush Goyal tables the Union Budget.

The Republic Day celebrations threw up another visual that would have left Prime Minister Modi and his party president, Amit Shah, seething—that of Rahul Gandhi and Union minister Nitin Gadkari seated together, exuding a bon­homie rarely seen these days between Congress and BJP leaders.

Gadkari has emerged as a sort of Leader of Opposition within the otherwise sycophantic cadre of the BJP that has become as enamoured of the Modi-Shah duo as Congress leaders are of the Nehru-Gandhi clan. The Gandhi-Gadkari photo-op comes at a time when the Union minister has been regularly taking potshots at Modi and Shah’s style of leadership amid rumours that he nurses ambitions of emerging as the consensus PM candidate of the NDA coalition four months from now if Modi fails to deliver a 2014-like landslide victory for his party in the Lok Sabha polls.

Gadkari, known now as the man the RSS may consider as a Modi alternative, has emerged as an unwanted conscience keeper of the prime minister and the BJP president. He has warned against “artificial marketing”, making tall poll promises and failing to deliver on them, and believing that good oratory skills alone can help win elections. While he has said all this without naming the person the jibes are against, the target is obvious.

Going by Mayawati and Akhilesh’s announcement, the Opposition’s grand alliance, at least in UP, has fallen apart prematurely. Bua and Bhatija have declared that their parties will contest 38 seats each. They have left two seats for “other” parties and will support the Congress in its family bastions of Amethi and Rae Bareli. Rahul Gandhi too has declared that his party will contest all seats in UP. Priyanka Gandhi Vadra’s political debut as the party general secretary in charge of eastern UP too signals that the Congress wants to aggressively reclaim lost ground in the state which was its bastion over three decades ago.

Many believe that the respective stands of the BSP, SP and Congress chiefs are mere grandstanding and that readjustments will be made closer to the Lok Sabha polls. Authoritative sources say the contrary and cite two reasons.

The SP-BSP combine is likely to play to its strength by fielding a substantial number of Muslim, OBC, SC and ST candidates. Had the Congress joined the alliance, it would have had to do the same and the BJP would have consolidated the upper caste vote, riding high on the Modi government’s Bill providing 10 percent quota for the economically weaker sections. However, the Congress is now free to field several upper caste faces in UP aside from giving its usual share of SC, ST, OBC and minority candidates. It hopes that the strategy will help in a better consolidation of voters against the BJP than a formal grand alliance would have achieved. All its prominent faces in the state—from Rahul and Priyanka to Jitin Prasada, RPN Singh, Raj Babbar, Pramod Tiwari—belong to the forward castes anyway.

The BJP clearly should not be celebrating the fall of the Mahagathbandhan just yet.