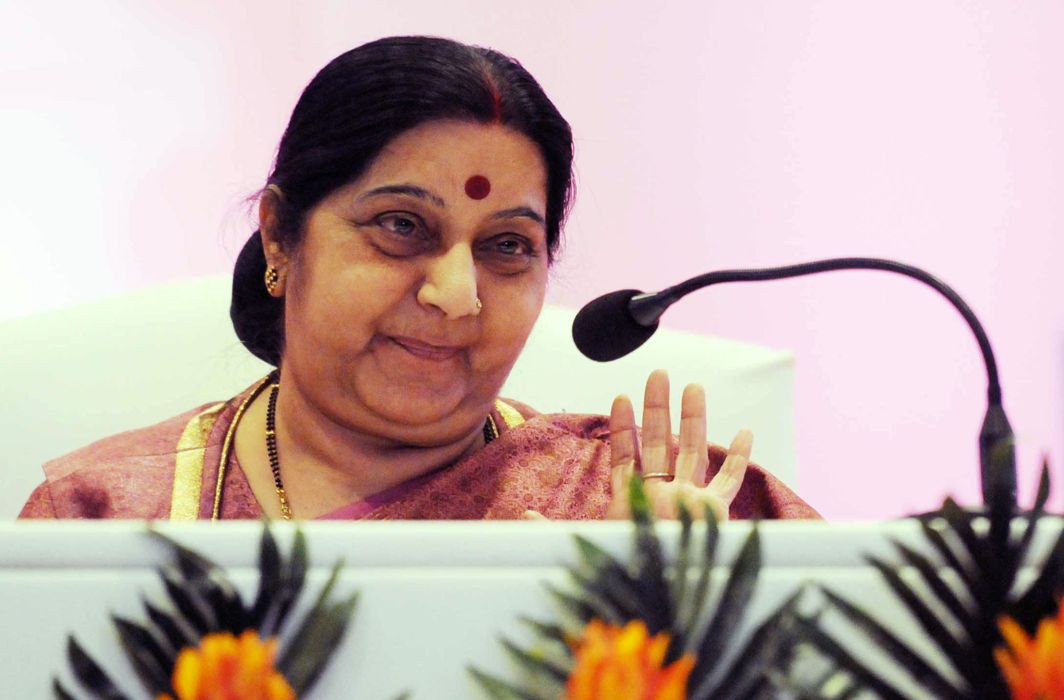 External Affairs Minister Sushma Swaraj informs Parliament that 39 Indians who had gone missing in Iraq in 2014 have been killed, mass grave found in Badush

Nearly eight months after she dramatically declared in Parliament that she “would not commit the sin” of declaring dead the 39 Indians who have been missing from war-torn Mosul in Iraq since 2014 unless she had conclusive proof, External Affairs Minister, Sushma Swaraj, on Tuesday (March 20), informed the Rajya Sabha that mass graves of these Indians had indeed been found in Badush village of northern Iraq.

Listen in to @SushmaSwaraj's statement in Rajya Sabha confirming the death of #39Indians who were abducted in #Mosul in Iraq.https://t.co/74VvayQoa6

The Union minister said that DNA tests were performed on the remains of the 39 corpses that were exhumed from the mass grave following permission from Iraqi authorities. She said that while in 38 of the cases the DNA samples had matched conclusively, the lone remaining sample was found to have matched 70 per cent.

Making a suo motu statement in Hindi, Swaraj told the Rajya Sabha that a team of Indian and Iraqi officials found the bodies from a mass grave in Badush.

The External Affairs Minister explained: “As many as 40 Indians along with some Bangladeshis were abducted by the terrorist organisation ISIS three years back (in July 2014). But one of them (Harjit Masih) escaped by posing as a Muslim from Bangladesh and the remaining 39 Indians were taken to Badush and killed later.”

“The last discussion on the matter (in Parliament) was held on July 27, 2017 when I had said that I will not declare them dead till I get any concrete proof. It will be a great irresponsibility and a sin on the part of our government. But, the day I will get a strong proof, I will request the chairman to stop the Parliament proceedings and give the information about it. And if no proceedings will be going on, I will inform the people of India within 10 minutes,” Swaraj said, recalling her statement to Parliament last year when she had been accused by Opposition parties of misleading the nation on the issue of the missing Indians.

For past 4 yrs EAM was telling me that they were alive,don't know what to believe anymore.I am waiting to speak with her,no information was given to us,we heard her statement she made in Parliament: Gurpinder Kaur, sister of Manjinder Singh who was among 39 Indians killed in Iraq pic.twitter.com/fwNqRoRPUG

On Tuesday, soon after Rajya Sabha proceedings began amid protests from the Opposition, Swaraj rose to say: “I have two information (sic) to share. First, Harjit Masih who escaped was lying and second, the Indians were killed. And I have proofs for these.”

Masih, who hails from Gurdaspur in Punjab, was the only man from the group of 40 Indians kidnapped by the ISIS in Mosul who had managed to flee. From the time of his mysterious escape, Masih has maintained that he had seen the other 39 Indians being shot dead by ISIS operatives. However, Swaraj has maintained that she did not believe Masih’s version of the sequence of events that unfolded in Mosul as it was full of loopholes. Masih was arrested in March this year on charges of forgery connected to an illegal immigration racket.

On Tuesday too, Swaraj maintained that Masih was lying. Swaraj said she had contacted Masih’s employer and found out that he escaped from Iraq along with some Bangladeshis claiming that his name was ‘Ali’ and that a “caterer helped Masih”.

Swaraj further said: “When General VK Singh (minister of state for external affairs) went to Iraq to find them (the 39 missing Indians), I asked him to meet the company’s owner in Mosul where the Indians were working. He started his journey from Mosul. The owner told Singh that 40 Indians and some Bangladeshis were working in his company. When ISIS started capturing Mosul, he asked all the people who were working there to leave. Iraqi residents left first, others left, but the Indians and the Bangladeshis did not leave.”

The minister added that the owner later called his caterer, who said that one day when the Indian and Bangladeshi employees were coming to have food at his place, the ISIS operatives saw them and asked – Who are you – to which the group responded: “we are Indians and Bangladeshis”.

Swaraj explained: “Then they said that these people will not stay here from now, and asked the caterer to take them to a textile factory. After reaching there, they separated Indians and Bangladesis. After some days, they took the Bangladesis to Erbil, capital of Kurdistan. The caterer said they (the IS men) gave these responsibilities to him. The caterer told (VK) Singh that he got ready to take them to Erbil in his own van.”

She added: “Harjit knows what he did that night and I am guessing they asked the caterer to give Masih a muslim name and free him along with the Bangladeshis. The owner said that once he got a call from a man called Ali who said he is the one who is supposed to leave with the Bangladeshis… Harjit called me from Erbil and asked me to save him. I first asked that how did he reach there. He was talking in Punjabi. He said he doesn’t know anything about that and just said Aunty ji please save me.”

Implying that Masih’s narrative had been a false one all along, Swaraj said: “He later made a story saying we were taken to a jungle where ISIS terrorists fired. The bullet grazed his leg but somehow he managed to leave and the others got killed. Masih’s story was wrong. He had left in the beginning only, becoming Ali.”

Detailing what may have happened to the 39 Indians, Swaraj said: “the next day when the ISIS counted the heads, they found out that only 39 Indians were there. So they thought this is not the proper place to keep them now. Then the ISIS took them to Badush. The company’s owner said he doesn’t know anything about what happened after that. There is a prison in Badush. Whether they kept the Indians there or killed them, I have no idea.”

The minister added: “General VK Singh, our ambassador Pradeep Rajput and an officer from the Iraq government together left for Badush… search operations led to a mound in Badush where locals said some bodies were buried by the ISIS. Deep penetration radars were used to establish that the mound indeed was a mass grave… Indian authorities requested their Iraqi counterparts to exhume the bodies.”

Asserting that the mass grave “had exactly 39 bodies, with distinctive features like long hair, non-Iraqi shoes and IDs”, Swaraj said that the bodies were sent to Baghdad for DNA testing. “For verification of bodies DNA samples of relatives were sent there, four state governments, Punjab, Himachal Pradesh, West Bengal and Bihar were involved… DNA testing by Martyrs Foundation has established identity of 38 Indians while there has been 70 per cent matching of the DNA for the 39th person,” the External Affairs Minister added. She also said that General (retd.) VK Singh will now be flying to Iraq to bring back the bodies on a special flight.

Swaraj told the Rajya Sabha that the 3-year-long wait for the families of those missing Indians, while ending with the sad news of the death of their near ones, had now reached closure.

However, politically and at a time when the ongoing budget session of Parliament has gained notoriety for repeated washouts in the face of Opposition protests, Swaraj’s revelation is only expected to make things more difficult for her and Prime Minister Narendra Modi’s government.

While Swaraj has repeatedly claimed that Masih – the only man who escaped from Mosul – was a liar, fact remains that over the past three years it is only he who has been steadfast in his claim that the missing Indians had been killed. Soon after Swaraj’s statement in the Rajya Sabha, and a repeat of it in the Lok Sabha, the Opposition parties, while expressing condolences to the families of those deceased, also made it a point to question why it had taken Swaraj and the Modi government over three years to establish the sequence of events and reveal the truth.

This is saddening for every Indian, rest I would ask why was this information delayed by the govt, they should tell how it happened, when they died. Also, the way govt gave high hopes to the families was not right: Shashi Tharoor, Congress on death of 39 Indians in Iraq's Mosul. pic.twitter.com/dZ3EGVtwYh

Congress leader Shashi Tharoor, CPI (M) general secretary Sitaram Yechury and a host of other Opposition leaders are now gunning for Swaraj, asserting that she had mislead the country on the issue of the missing Indians. The Opposition is wondering whether the Modi government will fix accountability and responsibility for the delay in revealing the truth about what went down in Mosul and the din is likely to grow louder in coming days as these parties try to corner Modi and the BJP.

Our condolences to the family members of the deceased. The question about why the BJP government kept giving them false hopes of being alive for past 3 years must be answered. https://t.co/9oPkdB89zG