Delhi’s beleaguered chief minister has frittered away the goodwill he won in the 2015 assembly elections. Will he make a course correction before it is too late?

Is Delhi Chief Minister Arvind Kejriwal losing the halo he acquired in 2015 after the unprecedented victory his party won in the assembly polls? It was no mean achievement when his young Aam Aadmi Party (AAP) won 67 of the 70 seats, giving a blow to the surging BJP. But two years later, Kejriwal’s claims of alternative politics appear to lie in shambles. Hit by ambition, a series of poll defeats, internal quarrels and allegations of graft and constant fights with the centre and the Lt Governor of Delhi, the party is losing its sheen. For a man who constantly preaches, Kejriwal has been strangely silent about the charges against his government.

AAP has been seen as an upstart party ever since it formed the government in Delhi with the support of the Congress in 2013. But Kejriwal resigned after 49 days and governor’s rule was imposed. However, the party made a spectacular comeback in 2015. But though he came to power promising to cleanse Indian politics, his second tenure has been a combination of failed promises. AAP today is like any other political party belying the hopes of the people.

How did Kejriwal fritter away so much goodwill in just two years? There was a time when he projected himself as the man of the masses, a messiah and an anti-corruption crusader. But his image has taken a beating due to various reasons. The slide began a few months after he took over in 2015 when the party split after he expelled founder members such as Yogendra Yadav and Prashant Bhushan for having an alternate view. He had built a personality cult around himself and made the party subservient to him.

In the past two years, AAP had been in the news for all the wrong reasons. Skeletons have been tumbling out of the cupboard as Kejriwal sacked four of his ministers on charges of alleged corruption, forging of degrees and sexual abuse. Five MLAs and two of its four MPs from Punjab have rebelled and left the party. There are reports that nearly 15 legislators are unhappy with Kejriwal’s autocratic ways and the confusion in the party. One rebel MLA joined the BJP ahead of the MCD polls. So Kejriwal has a major task in keeping his flock together. There is more trouble round the corner. Over 21 AAP MLAs may be disqualified any time in an office of profit matter pending before the Election Commission.

Added to that, his one-time confidant, Kapil Mishra’s allegations of financial irregularities in donations, bribery and nepotism charges have seriously damaged Kejriwal and his party’s reputation. Kumar Vishwas, another founder member of the party, has also fallen out with Kejriwal. There were rumours that he was gearing up to break the party at the instance of the BJP.

There have also been allegations of a close relative of Kejriwal’s, Surender Kumar Bansal who is the late husband of his sister-in-law, submitting forged bills for carrying out a civic project commissioned by the PWD department, currently under Satyendar Jain’s ministership. Bansal’s company, Renu Construction, was awarded a drainage project in Bakoli village along NH-44 in north-west Delhi in 2015.

The other major controversy is the defamation case filed against him and some AAP leaders by Finance Minister Arun Jaitley (see box) and who will pay the legal fees. Jaitley has accused them of making unsubstantiated allegations of corruption against him related to the period when he headed the Delhi & District Cricket Association in 2015. Top lawyer Ram Jethmalani, representing Kejriwal, had sent him a bill of Rs 3.8 crore and Kejriwal has asked the Delhi government to pay. The opposition is asking why public money should be spent on his private case.

The top priority for Kejriwal is to set his house in order. He should move from campaign mode to governance mode or else the party is likely to wither away.

It is not difficult to see why the AAP is in free fall. The party began to lose its image further this year with a series of poll losses despite high hopes. While it touted that it would capture power in Punjab, in Goa, it projected itself as an alternative to the Congress and the BJP.

In Punjab, the AAP could only win 20 seats with a 23.7 percent vote, while in Goa, it drew a blank with 6.3 percent votes. To add to its problems, the party was routed in the recent MCD elections with just to 26.21 percent of the vote share. Compare that to the 54.3 percent vote share in the 2015 assembly elections.

On top of that, Kejriwal has been a bad loser. He joined hands with other losers such as BSP supremo Mayawati in maligning electronic voting machines, with the result that the Election Commission has challenged anyone to prove that they have been tampered with. Interestingly, AAP leaders Alka Lamba, Kapil Mishra and a few others differed with the official line on this. Kejriwal has also been besieged by charges against his ministers.

A day after he was dismissed, Kapil Mishra claimed that he saw Health Minister Satyendar Jain hand over Rs 2 crore in cash to Kejriwal. “When I asked about the money, Kejriwal refused to answer. He said there are certain things in politics which are explained later,” Mishra alleged. The BJP naturally waded into these murky waters, with one of its leaders, Meenakshi Lekhi, saying: “Mr Corrupt has increased corruption in Delhi by leaps and bounds and this has overshadowed governance. The AAP’s leadership is being questioned because it is one man’s party indulging in corrupt practice and filling the coffers of his own family and people around him.” Kejriwal has kept mum.

The chief minister has also been playing a politics of diversion to hide his failures. Right from the day he took over, he wanted more power but under the constitution, he had it in only limited doses. Kejriwal began agitating for full statehood for Delhi and blamed the centre and the Lt Governor for all his failures. Kejriwal’s hypocrisy has been nailed by the Shunglu Committee report.

According to Delhi Congress chief Ajay Maken, the committee found illegal allotment of land, charges of nepotism, and unauthorised foreign visits by AAP leaders. The committee was set up by then Lt Governor Najeeb Jung in 2016 to look into the AAP government’s functioning. “We demand the sanction of prosecution of Kejriwal and his ministers under the Prevention of Corruption Act based on the Shunglu committee report,” Maken had demanded.

Jethmalani leaves Kejriwal in a corner

Delhi CM wants to keep his counsel against Jaitley, but will not own up to the “crook” comment, says Sujit Bhar

When Delhi Chief Minister Arvind Kejriwal refused to own up to the “crook” comment made against Defence and Finance Minister Arun Jaitley by his counsel, senior advocate Ram Jethmalani, Jethmalani said he was done with the case. He left the court, but his juniors, hired by AAP, pleaded for time as Jaitley’s lawyers, Rajiv Nayyar and Sandeep Seth bayed for blood.

On May 26, Kejriwal’s deputy Manish Sisodia held a press conference to say that all was fine and Jethmalani would still be representing Kejriwal. India Legal has learnt about a possible deal struck. 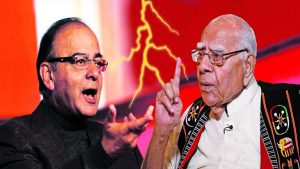 With Jethmalani readying for a visit to the US, his juniors landed up at his home and requested him to change his mind. Jethmalani has said he will think about it while in the US, but he wants his over Rs 3 crore bill paid in full. That is where it stands, with Kejriwal stuck between a rock and a hard place.

On May 17, during cross examination in the Rs 10 crore libel suit at the Delhi High Court, Jethmalani used the word “crook” on Jaitley. When challenged about the authority with which he was using the word, Jethmalani had said: “Take my statement that I received instructions (from my client).”

The episode was entirely avoidable. But it seemed that Jethmalani had a different agenda. He took up the issue of an article he had written for The Indian Express, but which was not published. He alleged it was Jaitley who “made arrangements with them and stopped its publication… I am suggesting to you that this article was managed by you not to be published.” He even justified this digression saying: “It is relevant in a suit for damages. I am to show that this man is a crook.”

Jaitley was so incensed by this that his voice was heard in every corner of the courtroom. “If this is coming from the client, then I am entitled to aggravated damages,” he said. Jethmalani countered: “Go, file for aggravated damages.”

But if Kejriwal has not taken onus for this statement, and yet wants to retain Jethmalani, would the senior advocate admit that what he said in court was untrue? The Bar Council of India can start disciplinary proceedings against an errant advocate, but the client has to endorse this.

That is the only way Kejriwal can escape Jaitley’s threat of a second Rs 10 crore suit for aggravated damages. That looks unlikely now.

India Legal, in its March 20, 2017, issue, had clearly explained how the personal enmity between the two could backfire on Kejriwal. This has now come true.

Though AAP has been struggling to change from a movement to a party, that has not happened. It needs a lot of perseverance, leadership and vision to take on parties such as the Congress and BJP which have been around for decades. Another drawback is that Kejriwal had begun to visualise himself as the main challenger to Modi in 2019 and did not miss a single opportunity to team up with other non-BJP chief ministers to attack the prime minister on many occasions. He began dabbling in national politics and along with Bihar chief minister Nitish Kumar and West Bengal chief minister Mamata Banerjee formed a pressure group against the centre. But often, negative politics backfires. Kejriwal believes in hitting out at his political rivals and making allegations without substantiating them.

In the past two years, AAP had been in the news for all the wrong reasons and skeletons have been tumbling out of the cupboard.

The going will get tough for him as the MCD poll results have shown that Kejriwal has lost the support of the middle classes and even the poor whom he pampered with free power and water. Both sections had moved to the BJP disappointed with AAP’s non-performance.

However, this does not mean that Kejriwal is finished. No doubt winning and losing is part of the political game and no party or leader is finished unless they lose the game altogether. That takes a while. Therefore, if the AAP decides on a course correction, it can still retrieve lost ground.

The top priority for Kejriwal is to set his house in order. At least now he should concentrate on governance. That is what the people of Delhi expect from him. He should move from campaign mode to governance mode or else the party is likely to wither away.

At the party level, he should change his style of functioning and decentralise decision-making, address dissent and function in a democratic way. Attempts should be made to build a second rung of leadership.

Above all, he should be clear about the focus of AAP. Is it about expansion, grabbing more power, anti-corruption or addressing the concerns of the public? Kejriwal tweeted after the MCD defeat: “To not evolve would be silly… need is action and not excuses… The only thing constant is change.”

Is he ready for a course correction?