As Prime Minister Narendra Modi re-allocated portfolios to his council of ministers on Sunday, shortly before flying off to Xiamen, China for the BRICS summit, he made his imprint absolutely clear – those firmly associated with him, like Nirmala Sitharaman and Piyush Goyal were rewarded with high-profile ministries, while BJP leaders who once enjoyed plum roles under Atal Bihari Vajpayee saw their stature diminished.

The biggest gainer in Sunday’s mega-expansion was clearly Nirmala Sitharaman. Not only did Modi award the former junior minister for commerce with a cabinet rank but he also elevated her straight to the elite ‘top five’ club of ministers, giving her the crucial defence portfolio. Sitharaman will now be part of the powerful Cabinet Committee on Security (CCS), sharing space with the Prime Minister and veterans Rajnath Singh, Sushma Swaraj and Arun Jaitley – ministers for home affairs, external affairs and finance respectively. Sitharaman becomes only the second woman since Indira Gandhi to hold the portfolio of India’s defence minister.


The other real winner in the reshuffle is Piyush Goyal, who was also elevated from being a minister of state with independent charge to a cabinet rank and moved to head Railways ministry while also holding charge of the coal portfolio. Suresh Prabhu, who had offered to resign as railway minister after two train derailments happened in quick succession two weeks back, has been moved to head Sitharaman’s erstwhile portfolio of commerce. As the new railway minister, the technologically savvy and articulate Goyal will have to implement a major image-makeover for the world’s largest rail network, which for several years now has been under criticism for poor maintenance, rising accidents, appalling catering services and lack of modernization.


Although Dharmendra Pradhan and Mukhtar Abbas Naqvi were elevated to the rank of cabinet ministers, they can’t be seen as major gainers in terms of their role in government. The two have been promoted but will still head the same portfolios as before – Pradhan leading the petroleum ministry while Naqvi at the helm of the minority affairs portfolio. Though Pradhan has been given new charge of the skill development ministry – which until two days back was headed by LK Advani acolyte Rajiv Pratap Rudy who was forced to resign – Naqvi, who had performed well as junior minister for parliamentary affairs has been made to shed that charge and limit himself to the predictable role of minority affairs minister, a role he anyway played, albeit showing little merit.

In a way, though Modi succeeded in making a big bang with the new look of his cabinet, he seems to have faltered in assigning roles to his new teammates as per their respective areas of expertise. 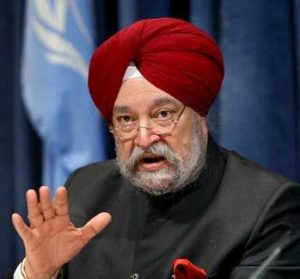 Take for instance career diplomat Hardeep Singh Puri and former IAS KJ Alphons who have both been inducted as ministers of state with independent charge. While Puri would have proven a good hand in the external affairs portfolio – where Modi needs all the help he can due to his government’s rather sketchy foreign policy – he has been given charge of the ministry of Housing and Urban Affairs. Similarly, Alphons, who had a proven track record on matters related to urban and town planning has been given independent charge of the tourism ministry and will also serve as minister of state for electronics and information technology.


Uma Bharati, another BJP veteran from the sidelined Atal-Advani camp, has been stripped off her charge of the Water Resources, River Development and Ganga Rejuvenation ministry. While Nitin Gadkari, who was tipped to become the railway minister but lost out apparently because he didn’t want the additional burden, has been given charge of the mammoth Water Resources, River Development and Ganga Rejuvenation ministry along with his current responsibility of the Road transport and Shipping portfolio, Bharati will now have to cool her heels as minister of the low key Drinking Water and Sanitation ministry. But then the Sadhvi should perhaps just be happy that she is still a cabinet minister; Modi had ostensibly wanted her to quit.

While Atal-Advani loyalist Kalraj Mishra has had to resign and his portfolio of Micro, Small and Medium Enterprises (MSME) has been reassigned to the controversial Giriraj Singh, who was promoted to the rank of minister of state with Independent charge of the same ministry in which he was earlier Mishra’s junior, ministers like Vijay Goel and Bandaru Dattatreya who enjoyed key responsibilities under the Vajpayee government were big losers on Sunday.

Goel, who was earlier MoS with independent charge of the Sports ministry will now be junior minister for Parliamentary Affairs; Statistics and Programme Implementation. The charge of the Youth Affairs and Sports ministry has been given to Rajyavardhan Rathore, who has been promoted to MoS independent charge with additional responsibility of being junior minister for Information and Broadcasting. Dattatreya, who was minister for Labour has been summarily dropped from the Cabinet.

Newly inducted minister RK Singh has been given independent charge of Power, New and Renewable Energy (earlier headed by Piyush Goyal), while Manoj Sinha has been elevated to MoS independent charge and will head the Communications ministry while continuing to serve as junior minister for railways.

Contrary to speculation, the Prime Minister has not reduced the burden of several ministers who were expected to shed the additional charge of ministries that they were asked to head in recent months, nor has he weeded out some obvious non-performing and controversial ministers like Radha Mohan Singh, who will continue to serve as the Union Minister of Agriculture and Farmers Welfare.

Although Arun Jaitley has, on expected lines, shed his additional responsibility of the Defence portfolio, Smriti Irani retains the charge of both Information and Broadcasting and Textile ministries.