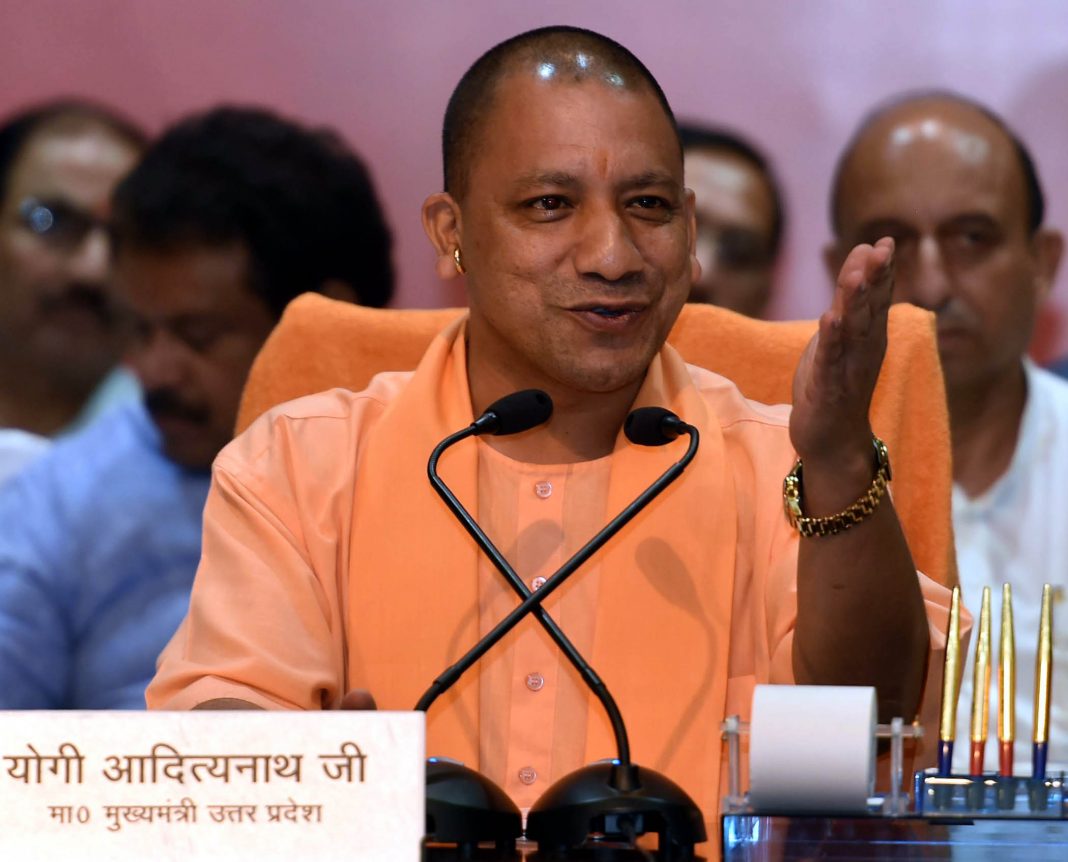 Above: UP CM Yogi Adityanath/Photo: UNI

In an interview to a television channel last year, Yogi Adityanath took pride in stating that he had changed the names of Miyan Bazar to Maya Bazar, Humayunpur to Hanumanpur and Ali Nagar to Arya Nagar. No written government orders were issued to notify these changes, yet the names stuck. He also asserted that he would even not hesitate to change the name of Taj Mahal to Ram Mahal.

With his Gorakhpur experiment not inviting any ire, the Uttar Pradesh (UP) chief minister has gone about the task of replacing Muslim names of districts with Hindu ones to erase their Islamic identity. He has held the view that Islamic names were given by Mughal rulers and now is the time to change them.

The first place to be given a Hindu name by the state government was Mughalsarai, the fourth busiest rail junction in the country, and which carried this name for about 157 years. In August this year, the government decided to name it after Deen Dayal Upadhyay, an RSS ideologue and Bharatiya Jan Sangh leader. One may have let this change pass as Upadhyay’s body was found on the tracks of Mughalsarai junction. Also, as the naming of roads and institutions after leaders has become a favourite activity of all political parties, the decision raised only a minor controversy, which soon died down.

But the October 16 decision of the UP cabinet to rename Allahabad as Prayagraj has stirred a debate on the communal overtones in the government’s move. It has also raised the fear that people may soon find too many old names obliterated from the map of the state as happened in Kerala in 1991 (when Trivandrum became Thiruvananthapuram) and in 1996 when 20 other districts got their names in Malayalam. But the difference between Kerala and UP is that while the former showed a linguistic bias, the latter’s move has an overtly communal tilt.

Mayawati too had gone about changing the names of eight districts, including Amethi, Kanpur Dehat, Kasganj, Hathras and Amroha. These districts were named after Dalit icons and leaders like Chhatrapati Shahuji Maharaj, Kanshiram and Mahamaya (Gautam Buddha’s mother). When Akhilesh Yadav took over as UP’s chief minister, he reversed Mayawati’s decision and restored the original names. That was an OBC leader rebuffing Dalit assertion for vote bank politics.

With the Lok Sabha elections approaching, a different kind of politics is in full flow in the present context when, in the name of correcting historical blunders, the communal hand is being played quite brazenly. Soon after the name of Allahabad was changed, Vishwa Hindu Parishad spokesperson Sharad Sharma demanded that Faizabad (earlier Fyzabad) be named Shri Ayodhya. Some others want it named Saket which, though, is said to be the ancient name of Ayodhya.

The VHP and the Bajrang Dal also urged the chief minister to rename Aligarh as Harigarh, Azamgarh as Aryamgarh and Muzaffarnagar as Laxminagar. The suggestion to change the name of the state capital after Lord Ram’s younger brother, Lakshman, was given by Lalji Tandon, a senior BJP leader and the present governor of Bihar, in May 2018.

The BJP’s Muzaffarnagar district president, Sudhir Saini, said that Hindu organisations want the name Laxminagar because they believe it was the district’s ancient name. Another BJP leader, Kapil Dev Agarwal, claimed that it was a long-pending demand as the VHP had held a yagna in the city in 1983, seeking change of name.

The Bajrang Dal’s Ankur Rana went a step further to claim that 2,000 years ago the region was known as Laxminagar, but offered no evidence. The town was believed to have been founded in 1633 during the reign of Shah Jahan. If Hindu outfits insist the place is 2,000 years old, then any logical argument in the prevailing atmosphere does not stand a chance as the involvement of a Mughal is reason enough for the place to be rechristened. The government may not even bother to verify if there was any documentary or archaeological evidence to substantiate the claim. Health Minister and party spokesman Siddharth Nath Singh gave a hint of this when he told a newspaper that some of these demands could be considered.

Muzaffarnagar will, however, have to wait before it is named after the goddess of wealth because of the importance of Faizabad and Ayodhya in the BJP’s scheme of things. Having failed to keep its promise of building a temple at Ram’s birthplace, the least the government can do is to change the name of Faizabad as per the VHP’s demand.

So why did the BJP government decide to change the name of Sangam City, as Allahabad was also known, to Prayagraj when there exists in the district an important railway junction by the same name? One obvious reason is communal politics. With Mughal emperor Akbar’s name associated with the city and “Allah” being a part of its spelling, the government must have thought it wise to hold the Kumbh fair in a city with a Hindu name. Historians deny that Akbar gave the city its modern name. The Mughal emperor who built a fort here named it Ilahabas, the abode of divinity and not Allah. In all probability, the city was given its modern name by the British. The ancient name of the city was said to be Pratishthanpur.

Similarly, the famous Khusrau Bagh and the fort built by Akbar are both historical monuments and their name change would require the nod of the Archaeological Survey of India and the centre.

The move to change Islamic names smacks of pettiness and is meant only to emphasise the revival of Hinduism for political dividends. Just as the name changing did not help uplift the poverty-stricken localities of Gorakhpur, Prayagraj too will continue to be a laggard in education, health and civic amenities. Prayagraj may also not be able to match the glory of Allahabad as a city of literary excellence.

Noted Urdu writer Shamsur Rahman Faruqi put it succinctly when he wrote: “A sprig of asafoetida would smell as fetid.”