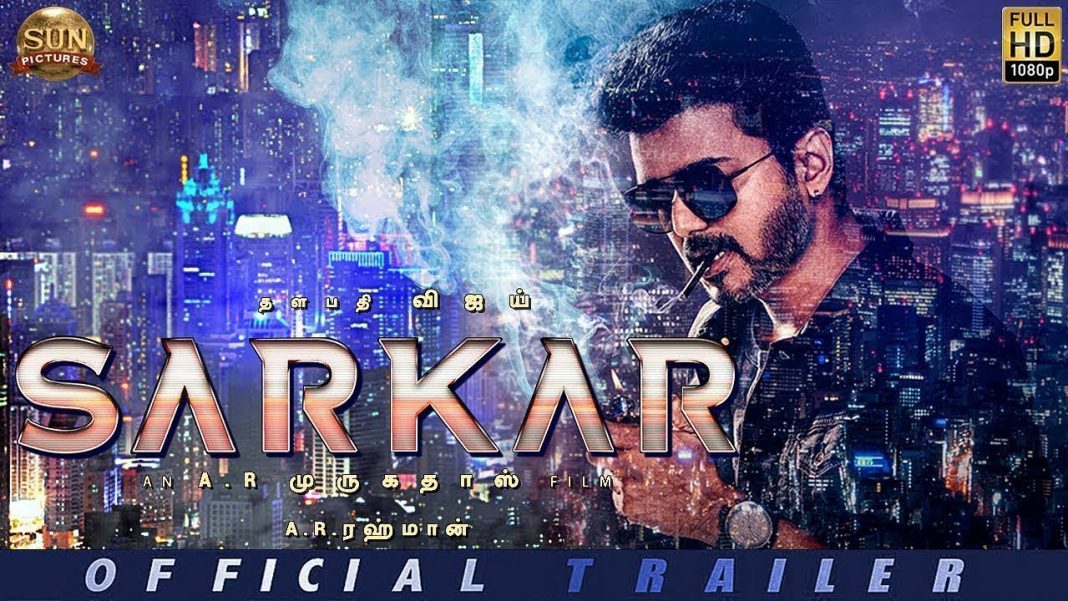 Above: A poster of the film Sarkar

The Tamil film, Sarkar, rakes in the big bucks, but not before its producers bow to pressure from the ruling AIADMK, send it for re-censorship and agree to chop off controversial scenes

After two aging heroes of Tamil cinema—Kamal Haasan and Rajinikanth—churned up the political waters of Tamil Nadu with their entry, it seems to be the turn of yet another movie hero, Thalapathi (Commander) Vijay, to jump into the fray, riding the political controversy generated in the wake of his Diwali blockbuster, Tamil movie Sarkar.

Award-winning director AR Murugadoss, well-known for his blockbuster movies, including the Aamir Khan starrer, Ghajini (2008), in Hindi, has directed Sarkar. His two earlier films with Vijay as the hero—Thuppaki (2012) and Katthi had also run into controversy.

Thuppakki’s problem was related to allegations of showing the minority community in bad light, while Katthi faced the wrath of Tamil fringe groups as the producer was a close associate of former Sri Lanka president Mahinda Rajapaksa.

Gautaman Bhaskaran in a review described Sarkar  as “unashamedly a propaganda vehicle for Vijay”. The superhero techie flies into Tamil Nadu to cast his vote, finds someone has voted in his place. Then he gets into action singlehandedly to cleanse the corrupt political system, to take over the reins of the government.

The ruling All India Anna Dravida Munnetra Kazagham (AIADMK) party was not amused with scenes featuring a political party distributing freebies before elections, its signature method of electioneering. It also objected to naming one of the antagonists of the movie as Komalavalli, name of the party’s icon the late J Jayalalithaa before she joined movies.

Tamil Nadu information minister Kadambur Raju asked the producer Sun Pictures and director AR Murugadoss to remove the objectionable scenes from Sarkar. He said, “The Sarkar scenes showing people throwing the Tamil Nadu government free appliances into fire should be removed voluntarily from the movie. If not, the government will take necessary steps to remove it.”

Other ministers dubbed the movie as a propaganda against the party because producer Kalanithi Maran’s family connections with the DMK.  Hundreds of AIADMK supporters went on a rampage particularly in Madurai. They tore down hoardings and posters showing the baby-faced hero Vijay, posing in his signature stance a la Superman.

The director, Murugadoss, received death threats; he sought anticipatory bail after an individual lodged a complaint with the Commissioner of Police stating that the director should be booked under acts of terrorism.  The producers bowed to the pressure from exhibitors and agreed to remove the so-called objectionable scenes from the movie. Ironically, the AIADMK fighting internal wrangles, used the Sarkar controversy as a rallying point for its cadres.

The Sarkar controversy has both political and constitutional dimensions relating to fundamental freedoms.  Politically, there is a power vacuum in Tamil Nadu after the exit of two powerful leaders—Jayalalithaa and M Karunanidhi of rival DMK. The ruling AIADMK party is in a self destructive three-way leadership power struggle, while MK Stalin, who inherited the DMK leadership, is flexing his muscles in the wings to capture power.

Vijay has been nurturing political ambitions for some time now. In 2008, he flew to New Delhi and met Rahul Gandhi to join the Youth Congress. Since then he had been dropping hints about his imminent political entrance. However, he sounded more ominous during the audio release function of Sarkar in October 2018. When the anchor asked him whether he would become a real-life CM, he replied, “If I become the CM, then I won’t just act like one, but do my job sincerely.” Commenting on politics, he said,

“The first thing I want to change if I become the chief minister is corruption. The state needs a good leader, only when the leader is corruption-free, others below him will also be without corruption.” The film producers could not walk the talk. The film raked in the big bucks, but only after, bowing to political pressure, its producers agreed to remove some of the objectionable scenes.

The CBFC guidelines for certification containing 20 clauses are elaborate and all-embracing. It covers a whole range of “anti-social activities” like not glorifying or justifying violence, method of operation of criminals to scenes justifying and glamorising drinking, drug addiction and use of tobacco. But some guidelines like “dual meaning words as obviously cater to baser instincts are not allowed” are too vague. Even guidelines on “visuals or words which promote communal, obscurantist, anti-scientific and anti-national attitude” are open to interpretation.

Even after CBFC clearance, some of the movies face the wrath of local governments which bow to populist or political pressure to block their screening. The Padmaavat controversy is a very good example of this aberration. In Tamil Nadu, the release of Kamal Haasan’s Viswaroopam was held up by the state government ostensibly in the interest of public order and security.

So censor certification continues to be a major bugbear of film fraternity. This is more so in Tamil Nadu where politics has umbilical links with movies ever since playwright CN Annadurai founded the DMK with another playwright, Karunanidhi, in 1949. Since then, there had been no stopping of political propaganda, ostensibly carrying the message of social reform, finding its way into Tamil movies.

Movies also provide platform for filmstars to leverage their popularity to make it big in politics. Perhaps, the biggest of them all were Karunanidhi, actors MG Ramachandran and Jayalalithaa who ended up as successful chief ministers. Of course, some superheroes like Sivaji Ganesan failed to make the grade in politics. The yin and yang of the relationship between politicians and actors affects the fortunes of political leaders as much as filmstars.

Inevitably, this adds to the film certification woes of producers and exhibitors in Tamil Nadu. It also raises the larger issue of censorship in the country.  It involves suppression of speech or public communication regardless of freedom of speech protected in the Indian Constitution. On the other hand, the constitution also places some restrictions on freedom of expression for maintaining communal and religious harmony.

While this is understandable, it is difficult to accept objectionable content, as per the Information Technology Rules 2011. These include anything that “threatens unity, integrity, defence, security or sovereignty of India, friendly relations with foreign states or public order”.  It is rules such as these, that are more prone to misuse, that made Freedom House in its annual Freedom of the Press index give India a freedom rating of “Partly Free” in 2016.

—The writer is a retired Military Intelligence specialist on South Asia, and is associated with the Chennai Centre for China Studies and International Law and Strategic Studies Institute.