154,225FansLike
654,155FollowersFollow
0SubscribersSubscribe
Home Politics What Do the S... 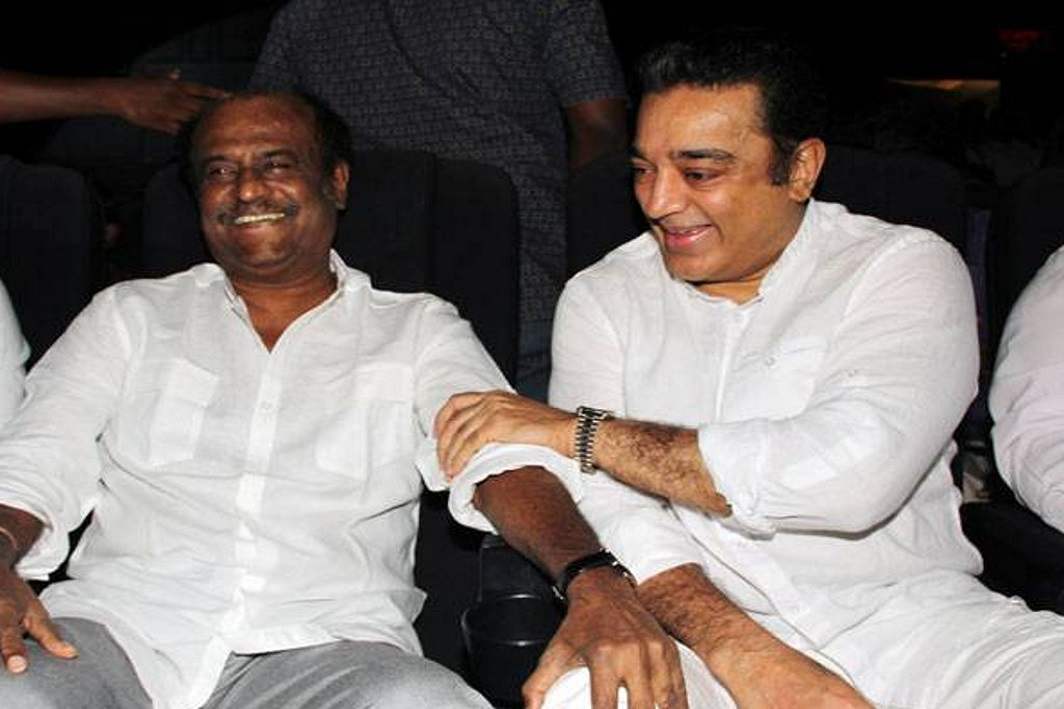 Above: Will the huge fan following of Rajinikanth (left) and Kamal Haasan translate into votes?/Photo: Cinema.com

Rajinikanth and Kamal Haasan, these political novices must compete with the money power, organisational strength and foot soldiers of the two established parties, the AIADMK and the DMK

With superstars Rajinikanth and Kamal Haasan announcing that they will be entering politics by launching their own political parties, an old debate has re-surfaced— can actors capture political power in Tamil Nadu in the next assembly elections in May 2021 as easily as in the past?

Tamil Nadu (TN) is the only state where in its 47 years of existence from 1969 to 2016, only three people have become chief ministers. They are DMK’s M Karunanidhi and AIADMK’s MG Ramachandran (MGR) and J Jayalalithaa and all were former actors. In that sense, the present chief minister, Edappadi K Palanisamy, is the first Tamil chief minister who isn’t from the film world.

On November 7, Kamal Haasan said he was going to start his own political party soon. “My purpose is to challenge the status quo plaguing TN. I have larger goals, a longer time-frame and it is not just about contesting elections. I am getting the political party ready….The foundation has to be prepared strong for an organisation to sustain. The actual launch of the party, naming and agenda call for a lot more work which is going on in consultation with thought leaders.” He added that he would announce the name of his political party on February 21 and begin his first state-wide tour from his home town, Ramanathapuram.

Meanwhile, Rajinikanth, 65, announced his decision to take the plunge into politics on December 31 in Chennai. He said: “The system has become rotten. The need of the hour is spiritual politics.” He said he would contest in all 234 constituencies in the assembly elections. “The political climate in Tamil Nadu has made us hang our heads in shame. There is widespread corruption in the state politics and it has made people from all other states in India laugh at us,” he added. But he didn’t announce the date for launching his political party nor did he say anything about its principles and policies.

Tamil Nadu, interestingly, has always been led by cine stars. The Dravidian movement, started in the 1920s, later became the Dravidar Kazhagam (DK) party in the late 1930s.  Dominated and guided by the late Periyar, called “Thanthai Periyar” (his original name was EV Ramasami Nayakar), the DK stood for the rights of non-Brahminical castes in Tamil Nadu. Periyar himself was an aggressive atheist. But he did not enter electoral politics. In 1949, the DK faced a split when chief minister CN Annadurai, popularly known as “Anna”, broke away from the mother organisation and launched the Dravida Munnetra Kazhagam (DMK). The DMK boycotted the first general election in 1952, but jumped into electoral politics in the 1957 elections. It won 15 seats in the 234-seat state assembly. In 1967, the DMK captured power in the state.

The political stalwarts in Tamil Nadu—Anna, Karunanidhi and MGR—had thus over two decades of political experience in the state. They travelled the length and breadth of the state before capturing power. Azhi Senthilnathan, a political analyst and writer, told India Legal: “This is the main difference between them and Rajinikanth and Haasan. They did not capture power all of a sudden. The DMK worked in the state for at least 30 years before capturing power in Tamil Nadu in the 1967 assembly elections. It took MGR 20 years to come to the helm of affairs, while it took Jayalalithaa nine years. She was groomed as a politician by MGR in 1982 and was involved in grassroots-level politics. She was a Rajya Sabha MP in the middle 1980s. Though there were some initial setbacks, Jayalalithaa fought her enemy, the DMK, tooth and nail and captured power in 1991.”

However, this is not the case with Rajinikanth and Kamal Haasan, Senthilnathan added. “They may have fan clubs but they don’t have actual, ground-level and street-smart politicians on their side. Running a political party, maintaining an organisational structure and contesting elections are not as easy as people think.”

Tamil Nadu has over 66,000 polling booths and only the DMK and the AIADMK have the manpower to nominate booth agents. “Booth committee management is a major job to be tackled in electoral politics.  Major political parties will strategise and re-strategise this work constantly, sometimes months before the actual elections. From where will Rajinikanth and Kamal Haasan get these numbers?” asked ex-MLA U Balaraman from the Congress.

There is also the issue of money power in Tamil Nadu politics. The state is known for its “cash for votes” syndrome. An AIADMK spokesperson told India Legal: “Today, a person who wants to contest and win assembly elections in Tamil Nadu needs at least Rs 10 crore.” Money power was evident during the bypoll for RK Nagar, the assembly represented by Jayalalithaa till her death in December 2016. TTV Dhinakaran, a nephew of Jaya’s aide VK Sasikala, contested from here as an independent and pulled off a huge victory. So obvious was the money power that Election Commissioner OP Rawat reportedly said that the Commission needed to take “a very comprehensive look at the whole system of preventing abuse of money”.

“If enforcement is strict in one arena, it raises its head in another arena. So you are again back to square one. Like distribution of freebies, distribution of money. We enforced it so it was not there. This time in RK Nagar, we could catch only 23 lakhs. That is all, as against 89 crores last time,” he said.

While both parties have their own legal issues to tackle, money power, orgnisational skills and foot soldiers are their USPs. In that sense, Rajinikanth and Kamal Haasan will need great support to take on these established political parties.

In the case of Rajinikanth, the state BJP is aggressively supporting him in the hope that before the elections, they can win him over and stitch up an alliance. The party commands just two percent of the vote share in the state. The BJP has, however, been strongly critical of Kamal Haasan for his views on Hindutva and his emphasis on secularism. The party will have an uphill task in the state which stopped the Modi juggernaut in the 2014 Lok Sabha elections. So it is the BJP which desperately needs Rajinikanth and not the other way around.

There will be interesting times ahead for Tamil Nadu politics. After all, both Rajinikanth and Kamal Haasan have huge fan followings. But the days of MGR and Jayalalithaa are over.

Will these two novices in the political firmament be able to make a dent in the state’s politics? The stars will foretell.