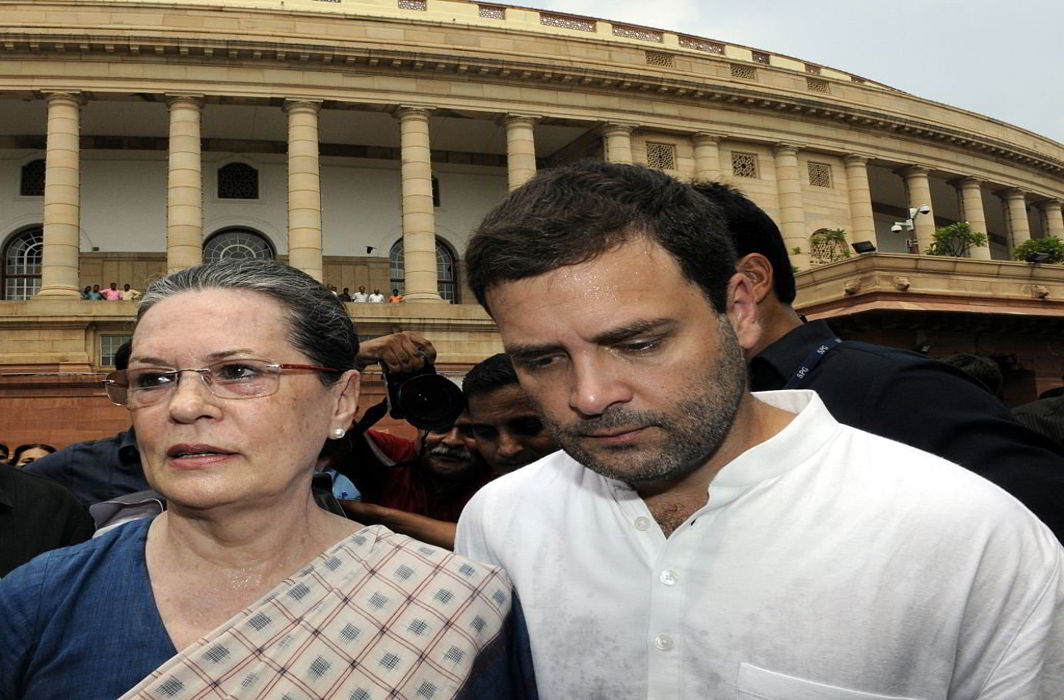 Congress sources say Sonia Gandhi will continue to advise her son on crucial party matters, help him reach out to potential allies

With her son, Rahul Gandhi set to formally take over as Congress president on Saturday, Sonia Gandhi has hinted that she will now retire from politics.

“My role is to retire”, was Sonia’s cryptic reply to questions by television channel NDTV on Friday, as she reached the Parliament to attend the first day of the winter session.

It remains to be seen whether Sonia’s remark would actually translate into her retirement from active politics and pave the way for Rahul firmly and comprehensively taking over command of the 131-year-old Congress party. Besides being Congress president – a post that she has held for 19 consecutive years since 1998 – Sonia Gandhi is currently also the leader of the Congress Parliamentary Party (CPP) which includes the party’s members from the Lok Sabha and Rajya Sabha.

In the years before Sonia took over as party president, the CPP leader would be the Congress’ designated Leader of the Lok Sabha (a position held either by the Prime Minister or the leader of Opposition, depending on which position the Congress held in the House). The party would also have a Leader of the Rajya Sabha. After Sonia became the Congress president, the party constitution was amended and the Leader of the Lok Sabha as well as of the Rajya Sabha were made to report to Sonia as the CPP leader – giving her total control of the party leadership.

Sonia Gandhi is also the current Lok Sabha MP from the Nehru-Gandhi bastion of Rae Bareli. It is unclear whether her decision to retire would mean that she will no longer contest from the seat too. Her health has been a cause of worry for nearly a decade now and while the exact details of what ails her have been closely guarded by the Congress party, she has been increasingly in and out of hospital for the past few years – the reasons for her hospitalisation, as declared by the party on different occasions, ranging from asthma, fever, food poisoning, chest congestion, et al.

There is some speculation that if Sonia does indeed vacate her claim to Rae Bareli in the 2019 Lok Sabha polls, Rahul could contest from the constituency while his sister, Priyanka Gandhi, could be finally roped in by the party to contest from Amethi. Both Amethi and Rae Bareli have been pocketboroughs of the Nehru-Gandhi family for decades; sending to parliament the late Feroze Gandhi, the late Sanjay Gandhi, former Prime Ministers Indira Gandhi and Rajiv Gandhi.

Shifting Rahul from Amethi to Rae Bareli could also be a politically savvy decision. Rahul’s popularity in Amethi has diminished in recent years and the constituency is being craftily nurtured by Smriti Irani, Union minister and close aide of Prime Minister Narendra Modi , for the past four years. Irani had unsuccessfully contested the 2014 general election against Rahul from Amethi but managed to substantially reduce his victory margin. In the years since 2014, Smriti has regularly been visiting Amethi while posters have often cropped up in the town declaring Rahul as “missing” and promising an award for information on his whereabouts.

This is not to say that Rahul could lose Amethi in 2019, especially not after he becomes Congress president. But, the party might feel it prudent to project him as the candidate from his mother’s seat while getting Priyanka to make her much-awaited political debut from Amethi. Priyanka’s entry into active politics has long been speculated though she has remained silent on this issue, confining herself to just campaigning for the party in Amethi and Rae Bareli during Lok Sabha and UP Assembly polls. She is often credited with a much greater public appeal and political acumen than her brother and the sycophancy that Congress leaders have traditionally been prone to will no doubt trigger calls for her entry into electoral politics once Sonia firmly declares her exit.

However, it is extremely unlikely that Sonia will completely disassociate herself from Congress politics. Highly placed sources in the party told India Legal that she will continue to play a behind-the-scenes role, helping a smooth transition of the party from the Old Guard of party veterans loyal to her to a New Guard of younger leaders who are confidantes of Rahul. The Old Guard v/s New Guard friction has afflicted the Congress for decades – right from the days when the late Indira Gandhi took over the strings of the party after her father, the late Pandit Jawaharlal Nehru all the way to 2004 when Rahul made his electoral debut.

Congress media cell chief Randeep Singh Surjewala has already clarified that Sonia was not retiring from politics but only from the post of Congress president and that “her blessing, wisdom and innate commitment to Congress ideology shall always be our guiding light”.

Senior party leaders told India Legal on condition of anonymity that contrary to earlier speculation of the party amending its constitution to craft a new role for Sonia, no new designation will be carved out for her. The reason for this seems to be the assumption that such a move would give Congress’ political rivals, especially the BJP, a chance to spread rumours of two parallel power centres within the Congress – as was the buzz when Sonia declined the Prime Minister’s chair in 2004 and named Dr Manmohan Singh as her choice for the role. By not formally giving Sonia a specific role, the party will also avoid the possibility of leaders unhappy with Rahul’s style of functioning – and there are quite a few of those – rushing to her at the slightest instance of a disagreement with her son.

Sonia will, sources say, continue to steer Rahul and the party through crucial political decisions and wield significant power by the sheer enormity of her stature within the Congress – and undoubtedly also in public life. Perhaps more importantly, she is expected to be the go-between for Rahul when he tries to find new political allies and build bridges with existing ones – something that he will now have to do increasingly in the run up to 2019 if the Congress hopes to pose a formidable challenge to Prime Minister Narendra Modi and his BJP.