Above: The CPCB fined the DDA for illegal waste dumping in Bawana and other places/Photo: knocksense.com

In May 29, 2019, the Delhi High Court ruled in favour of the Delhi Development Authority (DDA) by restraining the Central Pollution Control Board (CPCB) from taking any coercive action. This was with respect to the environmental damages of Rs 1 crore imposed by the regulatory body for DDA’s non-compliance with green norms.

The CPCB notices issued on February 20 and April 12, 2019, imposed environmental damages on DDA, the Delhi State Industrial and Infrastructure Development Corporation Ltd (DSIIDC) and the Irrigation and Flood Control Department, holding them liable for non-implementation of the Graded Response Action Plan (GRAP) under the Air Act and the Solid Waste Management Rules, 2016. The CPCB, in their field visits, had observed non-action by these agencies leading to illegal waste dumping, garbage littering, burning of plastic waste, construction debris dumping, plastic waste in drains and non-action on illegal plastic recycling industries. The inspection was carried out by the officials in Narela, Bawana, Patparganj, Okhla Industrial Area, and other open and vacant plots.

The GRAP for Delhi and NCR was notified by the environment ministry in January 2017 as part of its efforts to combat the deteriorating air quality in Delhi-NCR. A comprehensive list of actions was to be taken by the governments of Delhi-NCR and their agencies under the GRAP. Prevention of garbage burning, regular sweeping of roads for dust control, regulating traffic, etc, are some of the actions to be taken depending on the severity of air pollution. The National Green Tribunal, in its order of February 19, 2019, had proposed the following damages to be imposed due to non-action under the GRAP (See chart).

The DDA approached the Delhi High Court to challenge the fine imposed by the regulatory body. In its plea, the DDA contested the CPCB’s legal authority to impose such environmental damages. It also claimed that the CPCB disregarded its response outlining the remedial mea­sures and reiterated the fine of Rs 1 crore. The petitioner cited the 2012 Delhi Pollution Control Committee vs Splendor Landbase Ltd case decided by the Delhi High Court to challenge CPCB’s authority under the Air (Prevention and Control of Pollution) Act, 1981, and Solid Waste Management Rules, 2016.

“As far as my knowledge goes under s.o.730(e) dated 10th July 2002 in exercise of power conferred by section 23 of Environment Protection Act, 1986 the Central Government delegated power vested under section 5 of the said act to the chairman of CPCB to issue directions to any industry or any local or other authorities for the violation of the standards and rules relating to hazardous waste, bio medical waste, hazardous chemicals, industrial solid waste, municipal solid waste including plastic waste. Thus, chairman of CPCB can direct DDA on this matter,” said Dr DD Basu, a former CPCB executive, and currently Adviser–Monitoring and Compliance, Centre for Science and Environment. “However, such direction can always be subjected to judicial scrutiny,” added Dr Basu, referring to the current case.

According to lawyer Mallika Mendhiratta, the DDA used a precedent set by the Delhi High Court which questioned the procedural actions taken by DPCC denying its authority to impose punitive damages. “As far as the legality of the CPCB to impose damages is concerned, the Splendor case states that as per the statute, the DPCC has no power to impose monetary penalties including bank guarantees. It can only issue directions to the party to follow the required procedures, which it had not done.” 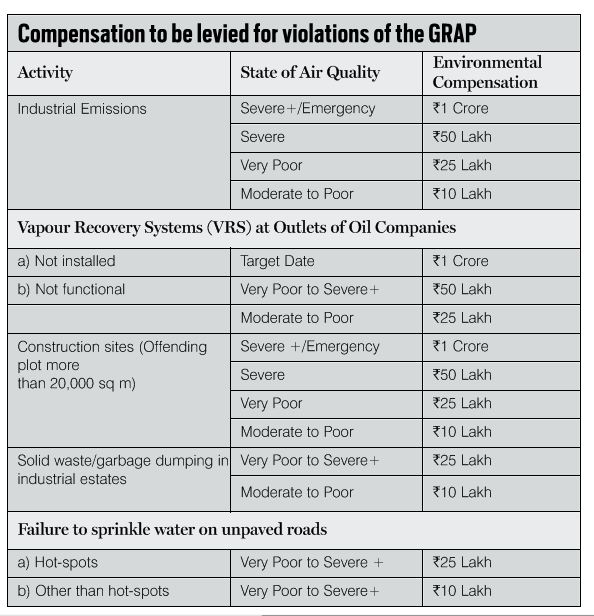 “However, there have been subsequent judgments of the NGT which have upheld imposition of bank guarantees as a form of payment of environmental compensation but not penalty. Presumably, this is the logic the CPCB is also applying as compensation is not the same as penalty,” said Shibani Ghosh, environmental lawyer and faculty at the Centre for Policy Research. According to Ghosh, “there is no bar in law as far as requiring defaulters or polluters to compensate for the damage caused by them, as long as it is not in the form of a penalty. Section 5 of the EP Act and Section 31A of the Air Act give powers to the CPCB to issue directions, but the nature of these directions has not been specified. So, it is possible to interpret the power to require the DDA and the other agencies to pay environmental compensation to be included within it.”

The DDA also questioned the quantum of fine imposed by the CPCB, calling it unjustified and exorbitant. The calculation of environmental damages is largely assumptive. “How environmental damages are calculated remains a million-dollar question,” said Dr Basu. “Compensations in such cases are calculated by actuaries who use mathematics and statistics to determine the cost of damage. Actuarial science is based on probability, where professionals usually assess damages based on number of people affected, risks of ailments, medical costs, ecological costs, etc. Disability-Adjusted Life Year (DALY), a matrix to calculate the disease burden is also used,” added Dr Basu. “Often the damages levied are challenged due to their presumptive nature.” According to him, the judiciary has the authority to decide if the damages levied are justified.

Interestingly, DDA’s move to go to courts may backfire, according to him. “Why did DDA go to court? There are huge possibilities of the damages getting enhanced, if CPCB can make a strong case.” Dr Basu cited the example of Erin Brokovich, whose environmental crusade against the Pacific Gas and Electric company (PG&E) was made into a film starring Julia Roberts. PG&E had to pay a huge amount for dumping Hexavalent Chromium or Chromium 6 lined waste-water, a known carcinogen. “The suit not only made the company pay for the damage to people and ecology, it also set an example for other companies to stop using Chromium 6,” he said.

The efficacy of imposition of fines to achieve pollution reduction, however, is questionable. Implementation of green norms has always been a thorn in the path for environmental regulators. “One reason why pollution is not properly regulated, and pollution standards are not enforced is that criminal prosecution is not an effective or attractive tool for pollution control boards. It is a time and resource intensive route, with no real impact on pollution reduction. In such a situation, regulators need to be given more tools for regulation—such as imposition of bank guarantee conditions—which some PCBs are already doing,” said Ghosh.

“To win the crusade against non-conforming agencies, the regulators need to have proper systems of accountability and adequate capacity to ensure that these additional tools do not become new avenues for rent seeking,” she added.