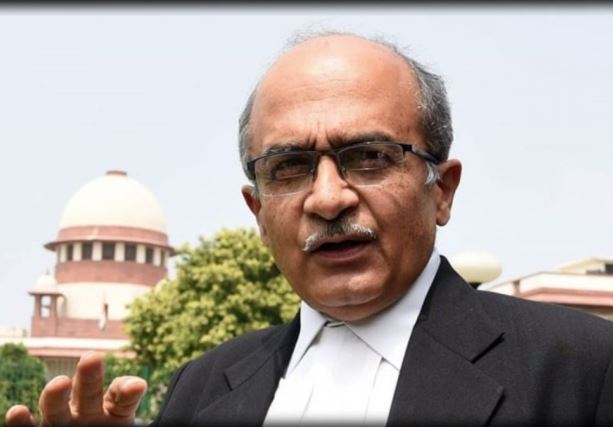 A lawyer has written to Attorney General KK Venugopal seeking consent to initiate proceedings for criminal contempt against Senior Advocate Prashant Bhushan for his statements in an Interview published in The Hindu Magazine on November 29, 2020, titled ‘The independence of the judiciary has collapsed’.

Advocate Sunil Kumar Singh has made note of Bhushan’s tweet that read “The independence of the judiciary has collapsed: Prashant Bhushan”: This is the full interview online,” along with his half photograph peeping out of the picture frame.

“The independence of judiciary has collapsed: Prashant Bhushan. The current regime has used state agencies to prepare a dossier on Chief Justices even before they assume office, says the advocate and activist”- Prashant Bhushan’s tweet further read, according to the letter.

According to advocate Singh, the contents of the interview are prima facie contumacious specially Bhushan’s statement that the major problem is lack of independence of the Supreme Court, and its willingness to kowtow to the Government. The statement is a gross insinuation that the Supreme Court of India is not an independent and impartial institution but is willing to kowtow to the Government. It is highly objectionable and audacious and considered to be a malicious attack on the Apex Court.

The letter has stated that according to Bhushan, the reason for the lack of independence was “the government’s ability to bring Chief Justices under its control to virtually influence every important decision……” which is mala fide statement motivated to denigrate the highest judiciary as part of an orchestrated campaign.

The letter has called Prashant Bhushan a chronic contemnor, as despite there being many proceedings for contempt before the Supreme Court of India against him, he is not desisting and stopping from making irresponsible, contemptuous and contumacious statements against the honourable judges of the Supreme Court of India. The statements made by Bhushan are of a very serious nature, being mala fide and motivated to denigrate the higher judiciary.

Advocate Sunil Kumar Singh in his letter has made note of AG Venugopal’s recent observation in Kunal Kamra’s case, that today people believe that they can boldly and brazenly condemn the Supreme Court and honourable judges of the Supreme Court of India by exercising what they believe to be their freedom to speech. But under the Constitution, the freedom of speech is subject to the law of contempt and it is time that people understand that attacking the Supreme Court of India unjustifiably and brazenly will attract punishment under the Contempt of Courts Act, 1971.

The letter has stated that in the present time when the country is under immense pressure to survive the setback caused by the economic constraints, such statements are prone to universal observation and may affect the million and trillion dollars expected investment in our country and may ultimately affect the economy of our country also. It is very clear that all collective attempts of making a scandalous and contemptuous statement by Prashant Bhushan and people like him are seriously harming the image of India and its popularity and ultimately the majesty of the Supreme Court of India.

Did you find apk for android? You can find new Free Android Games and apps.
Share
Facebook
Twitter
Pinterest
WhatsApp
Previous articleCalcutta HC expresses displeasure against Registry for not listing plea for 23 years
Next articleDecember 14, 2020