The firming up of the Quad alliance after a decade, despite the continued differences in strategic security priorities of its four members, is related to the rise in power of Xi Jinping in China in 2012. 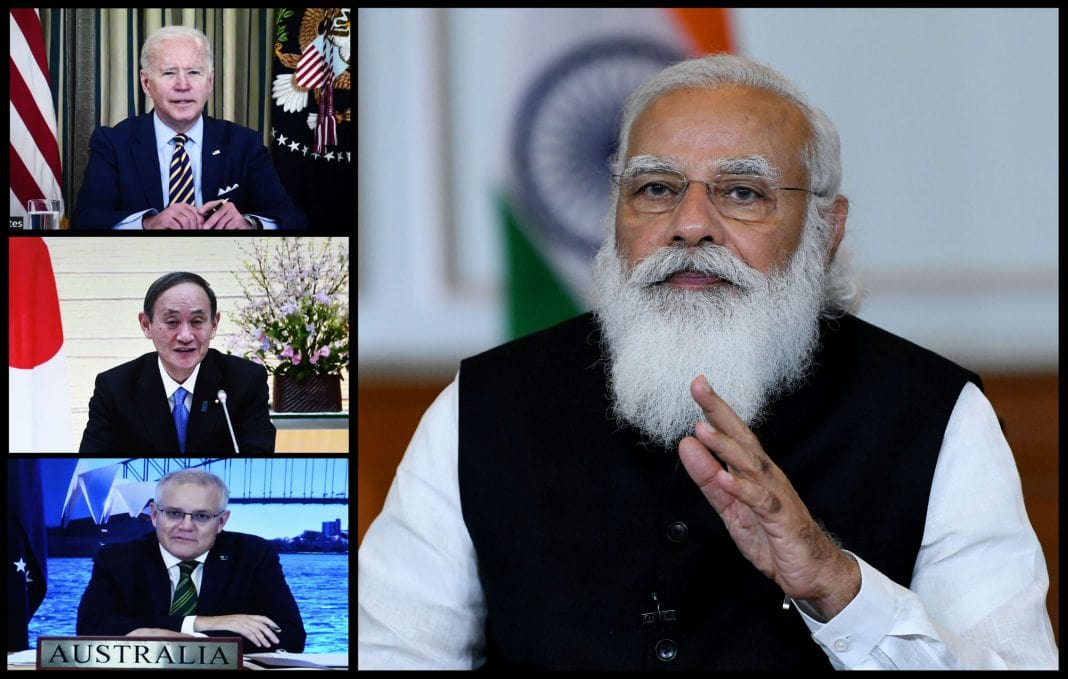 Addressing the virtual summit meeting of leaders of QUAD – the Quadrilateral strategic grouping of the US, Japan, India and Australia – on March 12, Prime Minister Narendra Modi said: “We will work together closer than ever before for advancing our shared values and promoting a secure, stable and prosperous Indo-Pacific.” He added: “Today’s meeting shows that Quad has come of age. It will now remain an important pillar of stability in the region.”

PM Modi is probably right in celebrating the summit meeting as the coming of age of Quad, considering its transformation from a notion aired in the wake of the Boxing Day Tsunami in 2004 by the four nations, to its present avatar as a strategic framework of cooperation between four stakeholders of the Indo-Pacific. At the time of the Tsunami, the four countries formed a “core group” to coordinate their response to the disaster, but it did not progress beyond discussions due to their own strategic preoccupations.

The concept came alive briefly thereafter, as the “Strategic Global Partnership of Japan and India” when Prime Minister Shinzo Abe of Japan addressed the Indian parliament on August 22, 2007. He called it the “confluence of the two seas”, borrowing a phrase from the title of a book by Mughal Prince Dara Shikoh. It was part of Japan’s diplomatic initiative at the time “Arc of Freedom and Prosperity” to be formed along the outer rim of the Eurasian continent. It had the laudable objective of ensuring values such as freedom, democracy and respect.

However, differing strategic priorities in dealing with the booming Chinese economy set to overtake the Asian frontrunner Japan acted as a dampener to the growth of Quad. The whole world tried to woo China to do business with it. America, trying to get out of a looming economic disaster, was busy courting China as an investment destination. Japanese and Taiwanese investors queued up to make money out of China’s growing manufacturing industry to boost their exports. ASEAN countries opened up their markets for trade with China. So generally, there was a reluctance to firm up the Quad alliance as it could be construed as “ganging up” against China.

Inward-looking India, never known for making up its mind, was following the “middle path” in a bid to rebuild its stilted relations with China. It was still talking of Look East policy rather than acting upon it. The Quad concept became stillborn after Australian Prime Minister Kevin Rudd, considered a Sinophile, walked out of the amorphous “alliance” in 2009.

The firming up of Quad after a decade, despite the continued differences in strategic security priorities of its four members, is related to the rise in power of Xi Jinping in China in 2012.

It was in the same year that China’s vague territorial claim to the whole of South China Sea (SCS) turned into aggressive action, as it seized Scarborough Shoals from the Philippines. The shoals, located 240 km from the Philippine’s main island of Luzon, and 680 km from Hainan Island of China, is rich in fishing resources. Four years later, China’s territorial claim, based on the so-called “nine-dash line”, was rejected by the international maritime tribunal. China not only rejected the ruling, but firmed up its claims to other islets in the SCS.

In the meanwhile, China aggressively went ahead creating artificial islands out of islets and coral reefs. These developments alarmed ASEAN neighbours as China’s actions blatantly disregarded the claims of not only the Philippines, but also other claimants in the SCS-Vietnam, Malaysia and Brunei.  These developments, coupled with PLA Navy warships, increased muscle-flexing in the SCS and sent notice of China’s ambition to stakeholders of the Indo-Pacific region.

It was in 2012 that President Xi conceptualised his ambitious Belt and Road Initiative, a strategic multilateral infrastructure and development initiative to link China with the rest of Asia, Africa and Europe in a bold bid to create a new world order, with the country at its helm.

Three things hastened the process of the Quad framework formation. Modi was disillusioned after his repeated attempts to build a win-win, equitable relationship with China did not yield results; President Donald Trump’s aggressive “America First” policy pursuit which increased the level of strategic confrontation with China and a change in Australian leadership after being disillusioned with China.

The presence of Modi, Trump, Abe and Australian PM Malcom Turnbull in the East Asia Summit in November 2017 provided an opportunity for the top leadership of these countries to revive the concept of the Quadrilateral framework, in a bid to contain China. Before the leaders met, officials of the four countries held a meeting to discuss issues of common interest.

India’s Ministry of External Affairs press release after the meeting said: “The discussions focused on cooperation based on their converging vision and values for promotion of peace, stability and prosperity in an increasingly interconnected region that they share with each other and with other partners.” They agreed that a “free, open, prosperous and inclusive Indo-Pacific region serves the long-term interests of all countries in the region and of the world at large”.

After the election of Joe Biden as POTUS, there were doubts about the active involvement of the US in the Quad initiative. But these vanished after the Biden Administration acknowledged the significance of the Indo-Pacific region in its Interim National Security Strategic Guidance document released on March 3, 2021. It emphasised US commitment to the Quad, carrying forward the agenda of Trump. An Indo-Pacific coordinator has also been appointed in the US National Security to coordinate their Indo-Pacific strategy.

Having come of age with the successful conclusion of the summit meeting on March 12, how will the Quad framework grouping move forward? Given the diverse strategic priorities and national interests of the four nations, the Quad concept will be tested every time the members try to coordinate their moves in the overall interest of Indo-Pacific.

The Quad leaders’ joint statement issued at the end of the summit indicates a conscious effort to broadbase their areas of cooperation and coordination and take it beyond a China-centric grouping.  The key elements of the joint statement are –

Vision: They are “united in a shared vision for the free and open Indo-Pacific. We strive for a region that is free, open, inclusive, healthy, anchored by democratic values and unconstrained by coercion”.

Strategic perspective: Commitment to promote “a free, open rules-based order, rooted in international law to advance security and prosperity and counter threats to both in the Indo-Pacific and beyond. We support the rule of law, freedom of navigation and overflight, peaceful resolution of disputes, democratic values and territorial integrity.” They emphasised the importance of a “rules-based maritime order in the East and SCS” so as not to lose sight of the current critical situation created by China’s belligerence.

ASEAN centrality: The statement refers to upholding peace and prosperity and strengthening democratic resilience based on universal values. It notes “the urgent need to restore democracy” in Myanmar and complete denuclearisation of North Korea as objectives.

Group direction beyond military cooperation: It also addressed a range of challenges including “the economic and health impacts of Covid-19”, climate change and challenges in a host of critical issues faced by the world. These include cyberspace, critical technologies, counter-terrorism, quality infrastructure investment and humanitarian-assistance and disaster relief as well as maritime domains.

Relevance to current issues: They announced a desire to “collaborate to strengthen equitable vaccine access for the Indo-Pacific, with close coordination with multilateral organizations including the WHO and COVAX”.

Action items: Harsh Vardhan Shringla, Indian foreign secretary, explained that the goal was to pool financing, manufacturing and distribution capacity to send one billion coronavirus vaccines across Asia by the end of 2022. They have also committed to create three working groups on vaccine experts, critical and emerging technology and on climate.

If the Quad can live up to the key elements of the joint statement, and transform these into action, its future can be bright. Otherwise, it can get bogged down in the bilaterals of member nations with China and among themselves. As of now, the members have shown a lot of energy in taking forward the understanding arrived in March. Australia is contributing $77 million for the provision of vaccines and the last mile delivery support with focus on Southeast Asia. This will be in addition to its existing commitment of $407 million to regional vaccine and healthy security coverage to nine Pacific island countries and Timor-Leste. Japan will be providing grant-in-aid of $41 million and concessional yen loans for purchase of vaccines and cold chain support in developing countries. The US is leveraging its existing programmes to boost vaccination capability, with at least $100 million in regional efforts on immunisation. India is pitching in with additional manufacture of Covid vaccines with the assistance of the US and Japan.

Of course, in the midst of all this, the centrality of China continues to be relevant to Quad. This was illustrated during US secretary of defence Lloyd James Austin III’s three-day visit to New Delhi after the summit to discuss defence-related issues, including Chinese threat on the borders. The navies of India, the US, Japan and Australia are joining France for its “La Perouse” exercise in the Bay of Bengal from April 4 to 7. And more are to follow.