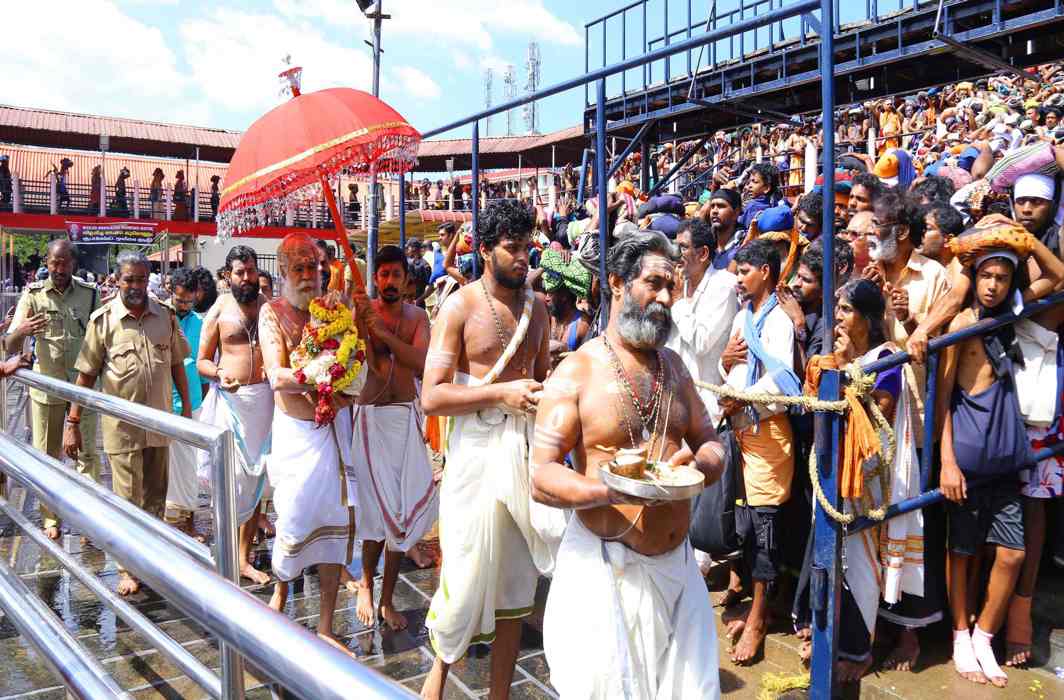 Hearing the depositions before it on the PIL on ban of entry of women aged 10 to 50 into the Sabarimala Ayyappa temple at Kerala, the Supreme Court constitution bench of Chief Justice Dipak Misra and Justices Rohinton Fali Nariman, A M Khanwilkar, D Y Chandrachud and Indu Malhotra on Tuesday (July 24) heard arguments by senior advocate Abhishek Singhvi, who said it was an age-old tradition, a belief and that it fell in the category of antiquity.

Singhvi said that the “primary objective is to protect the halo of the deity, if at all the women are being restrained.”

At this Justice Nariman objected, saying that is “inconsistent with your own earlier submission that for five days the women were allowed. “You cannot say that for those five days the sanctity of that same deity disappeared.”

Justice Chandrachud then raised the question of the constitutionality of such a practice and said that women are incapable of excluding worldly affairs while worshipping the deity.

Justice Nariman asked: “How far do we go with the concept of morality? Can the recently evolved Constitutional morality be put in such a situation as argued by the opposite side?”

Justice Chandrachud said: “Constitutional morality is two-fold, where right is affected upon objective and subjective reasoning.

To that Singhvi asked: “Why are women not allowed into mosques, if constitutional morality is being spoken about?”

At that the CJI said: “Constitutional morality must be looked into when the nature of such rights are subjective in nature. You have to establish that this is an essential integral practice.”

When Justice Nariman asked Singhvi to read the Kerala HC judgment, as the stand taken by them is important in that judgment, Singhvi said: “Your lordships will find various factual variations and logical inconsistencies as the state has taken three different views.”

The CJI interjected and said that this questions the integrity of the practice in the first place.

Singhvi said: “Psychology, abstinence and purity is the basis for exclusion, this has nothing to do with menstruation.”

Justice Nariman said that there was no usage antiquity.

To which Sanghvi said: “Writ under 32 is the easiest way for the petitioners which they have come under. There’s no trial, no evidence. Can the Supreme Court hold that such a practice is without antiquity without having a trial? Can the Supreme Court under 32 disturb an age old practice? Let’s keep right and wrong aside. You cannot come to the conclusion without having a proper trial. What are you trying to teach the young lawyers? Skip CPC, skip procedure and come to Supreme Court straight away?”

The CJI said: “We assure you, article 25 and 26 will be kept in mind before coming to any inference, says CJI.”

While reading a judgment where Subramanian Swamy was a party, Singhvi commented that out of all the errors he made, he does good to judicial research.  While Singhvi read the judgment relating to Dikshitas while comparing the present case with the case thereof, Justice Chandrachud interrupted and said that will not apply here as Dikshitas are a closed group.

This Singhvi opposed and suggested: “We are not questioning the origin of a belief. In the case of Dikshitas it is their belief is that only Diksitas can worship. It is a closed community, whereas in the present case it’s a belief to exclude women aged between 10-50 years.”

The bench, however, still was inclined that this practice does not come under antiquity of usage as it has come into being less than a century ago. It is noted that women were indeed allowed to enter the temple in ancient times.

Singhvi, while reading a reading a constitutional bench judgment, submitted: “It is not for us to say that it is a baseless belief. If at all women were allowed in history it was in breach of the beliefs.”

He said: “The thought is not anti woman. It’s based on faith and belief.”

Justice Nariman said: “The burden is on you to prove the belief and faith.”

Singhvi said: “The belief maybe fickle but who will decide? In the present petition no one says they were excluded or they per se wanted to worship and they were stopped. If that’s the case, subject me to trial, let’s stand in the box and decide.” He was opposing the maintainability of the present petition. He reiterated that this was a sensitive religious issue.

“There are so many things wrong in so many religions, but what can we do about it unless it’s banned, barbaric or in contravention to a statute? Singhvi asked. “The basis for exclusion is not puberty or menopause,” he said.

Justice Chandrachud brought out the crucial point, saying: “The line of argument you’re upon reveals that a woman is subject to the will of a man.

Singhvi opposed this and said: “Women below 10 are welcome, women above 50 enjoys the same title as a man.”