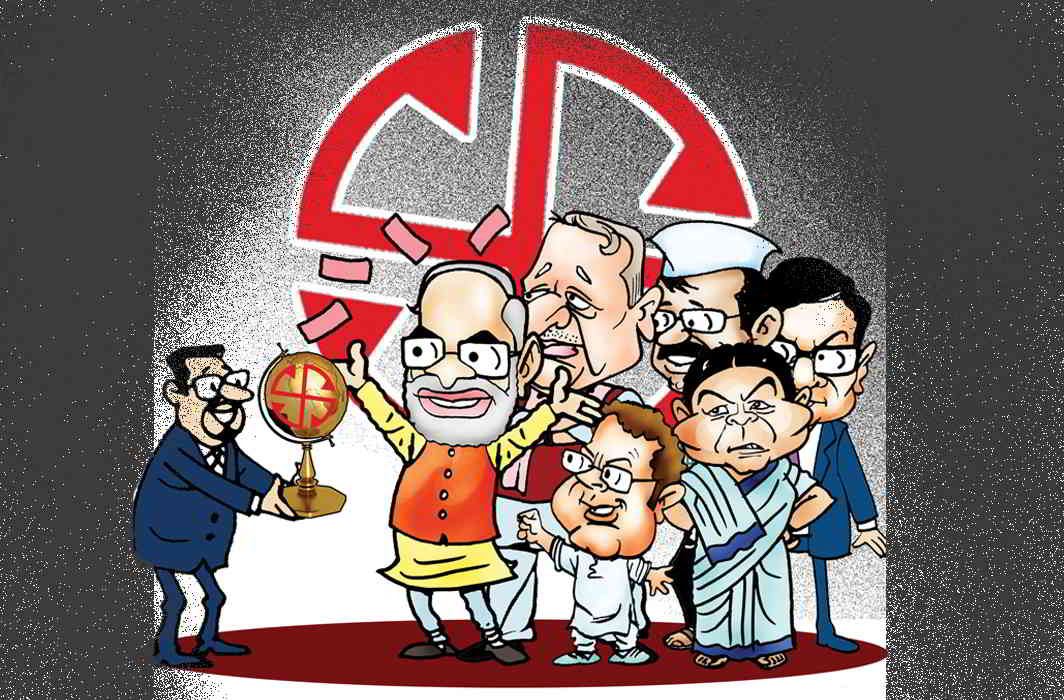 It’s the season for cinematic awards, in Hollywood where we saw Priyanka Chopra in a low-cut gown at the aptly named Golden Globes, and in Bollywood where the annual award ceremonies are underway. It’s also election season where we see some outstanding acting by leading candidates. Here’s our list of the year’s most deserving actors and the awards.

Best performance by an Actor: Drama: Narendra Modi in The Money Spinner

Acknowledged as one of the world’s greatest actors, all the world’s a stage for him, more so when it involves votes or, in this case, notes. The histrionics, the chest-thumping, the dramatic pauses and the oratorical flourishes all point to a man who has mastered the art of convincing his audience that paradise is around the corner. Last year saw his greatest role, of a spin-master convincing everyone that cash was trash.

He narrowly beat out his co-star Amar Singh for the comedic role of the year. In fact, he had us all in splits, including his own party, which is still on the mat trying to recover from his daily drama which consists of taking back what he had pledged the day before. He and Amar Singh have become the Laurel and Hardy of the Indian political stage, with all the laurels going to Akhilesh by default. Mulayam was a wrestler in an earlier role, so his performance in Dangal was more authentic as he grappled with credibility and his own son.

Best Performance by an Actor in a Supporting Role. Rahul Gandhi in La La Land

No prizes for predicting the winner of this award, it was RG all the way as he pranced around in La La Land, the imaginary world he inhabits most of the time. Last year, however, saw one of his better performances (when one saw him at all), as he took on his adversary, promising to burst his balloon and/or create an earthquake. Despite that, we still await his crowning moment.

Best Performance by an Actress: Drama: Mamata Banerjee in Befikre
She is India’s leading drama queen and a master, or mistress, of milking every performance for all its worth. 2016 saw her at her histrionic best, putting her best foot forward (in Bata slippers) and taking on the high and mighty with fearlessness and without a care for the consequences. Her fiery crusade was noble enough—anti-demonetisation—but in terms of the Opposition, she turned out to be the only one wearing the pants.

Best Performance by a Supporting Actor: Horror: Urjit Patel in Passing the Buck

The reviews have been universally bad but Patel’s performance in turning India’s central bank into a piggy bank for the government has been spine-chilling, although some would call it spineless.

There is no better actor when it comes to a performance which requires whining and complaining or finding conspiracy theories, but when he’s in campaign mode, Kejriwal is at his hysterical best. The Oscar moment came when he played a double role, promising to be chief minister of Punjab while still chief minister of Delhi. Sounds like one of those Buy One Get One Free offers.