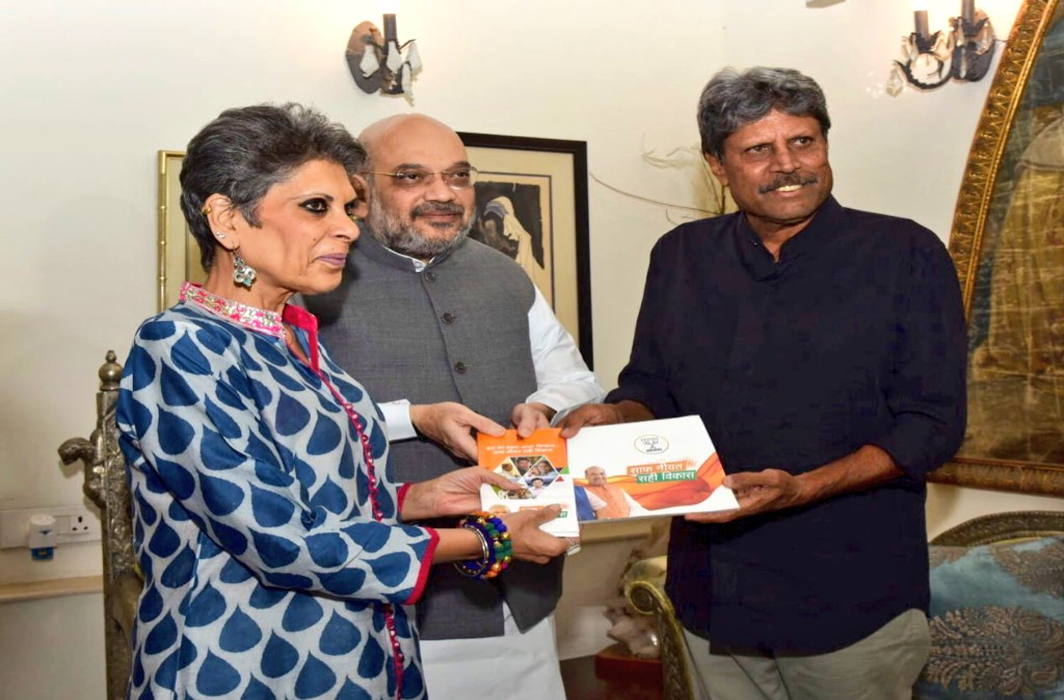 BJP President Amit Shah has embarked on his “Sampark for Samarthan” roadshow.  It translates roughly into “contact for support” though in some local dialects it is pronounced as “contact sport”, which it seems to have become in Mumbai where he has lined up a host of Bollywood stars to have a dialogue with. Bollywood stars, as we know from Koffee with Karan episodes, are not exactly au courant with political developments and so some meetings do not go according to script.  Examples:

Bollywood Leading Lady: Welcome to my vanity van, I was told you had a script to show me?

Amit Shah: I like this van, much better than the one I use in my election campaigns, seating area, bedroom, rest room, and what is that area?

BLL: That is the make-up area, where I do my make-up.

Shah: Very useful feature, my entire job involves making up with people, especially leading up to 2019.

BLL: Is that when your movie is releasing?

Shah: Movie? No I am not making a movie, I hire other people for that sort of thing.

BLL: So you are a producer, the financer…

Shah: No, I am Amit Shah, President of the BJP, you must have seen my pictures?

BLL: Maybe, can you name the ones you have made?

BLL: Oh, is that the one where Anupam Kher played the Prime Minister?

Shah: No, that was Manmohan Singh, I meant the present prime minister.

BLL: Pranab Mukherjee? I saw him on TV yesterday, It seemed he had joined the RSS.

Shah (boiling inside): The present prime minister is Narenda Modi, an icon and an inspiration for everyone, including actors, except Amir Khan. Here, you can read all about it here.

BLL: Oh is that a movie script? I have been dying to do some comedy roles…

Shah: Madam, this is deadly serious.

BLL: Who is that on the cover poster, it looks like Prithviraj Kapoor in Mughal e Azam? He was a distant relative you know?

Shah (grinding his teeth): That is Narendra Modi, the greatest leader the world has ever known. I suggest you read that pamphlet, sorry I am in a bit of a hurry so I can’t educate you any further. Please vote for us in 2019.

Amitabh Bachchan: Welcome to my humble home, er homes, Mr Shah, you really shoudn’t have brought that bunch of lotuses. They don’t go with the overall colour scheme. Also, I’m afraid you are wasting your time. I have read about your campaign, but I have suffered a lot because of politics, so I will not be endorsing any party.

Shah: We are both Shahen Shahs, they call me Big Boss and they call you Big B, so we have a lot in common.

Bachchan: Not at all sirji, you rule over India, I play a few roles in Bollywood and some TV spots for Gujarat tourism, but I will read that pamphlet you have brought with great interest. I wish you all the best for 2019.

Shah: You know this campaign is to do with contact for support and I need all the important contacts I can get.

Bachchan: Throw everything else on your mobile phone away, all you need is JD, Just Dial.

Shah to Phadnis:  Maybe I should just dial them instead of wasting my time meeting these Bollywood stars. Anupam Kher and Paresh Rawal gave me some names, so let’s see who’s next on the list?

Devendra Phadnis: Sir, she is the most promising among the future stars, you need to meet her, she has a huge following.  (Rings the doorbell)

Maid: Yes, whatever you are selling, we are not interested.

Phadnis: I am the chief minister of Maharasthra and this is the BJP President, we want to meet the….

Maid: I am so glad you finally responded. I had written to the CM’s office three months ago complaining about my neighbour…

Shah: We are not here for that, get the lady of the house. It is an urgent matter.

Promising Actress (emerging from her bedroom):  Who is it?

Maid: Some gentlemen with flowers.

PA: All gentlemen who come to see me bring flowers, what’s so urgent?

Shah: Madam, I am Amit Shah President of the BJP, and this is the chief minister of your state. We are here to ask you to please vote for us when the elections take place in 2019.

PA:  2019? I never plan that far ahead unless it involves one of the Khans and a guaranteed 100 crore business.

Shah: Madam, it involves the biggest star in the country, and all it requires is a black spot on the index finger of your left hand with indelible ink.

PA: Never! Indelible ink? It will ruin that expensive nail polish I bought in Paris.

Shah: Never mind, the country is in safe hands.