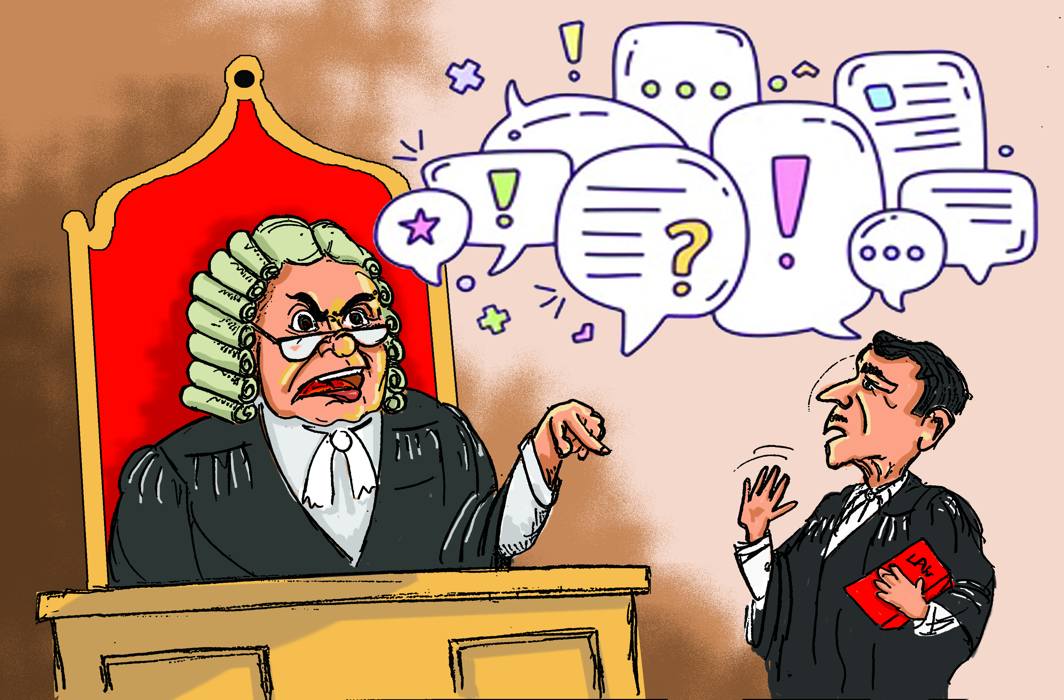 There is nothing more archaic and convoluted than the language in which courtroom proceedings are conducted in India, and indeed, across the world. Judges are still given royal status and referred to as “Your Lordships’’ while the use of Latin phrases is more prolific than in the Vatican. Added to that is the terminology and language that would give Shashi Tharoor an inferiority complex. Here’s a typical day in a courtroom.

Lawyer: May it please your Lordships, before addressing the merits of this case and disapproving my learned friend’s argument that the matter before this honourable court is Void ab Initio, I would beg your lordship’s indulgence and digress for a moment to quote from Justice Learned Hand.  Justice Learned Hand aptly remarked “Justice is the tolerable accommodation of the conflicting interests of the society and I do not believe that there is any royal road to attain such accommodation completely”. I associate myself completely and unambiguously with the learned judge’s remarks.

Judge: Can we get to the matter at hand.

Lawyer: I pray for your indulgence, M’lord. In this age of complexity of laws a greater responsibility is upon us lawyers to studiously read the provisions and comprehend the law so that an appropriate meaning can be attached to every word used in the statute apart from precedents wherein certain observations are made; one has to analyse the difference between ratio, binding principle or casual observations, and so on. This, in turn, may help the assessees in general, without sacrificing the interests of the nation. We argue before the Honourable Court on the basis of facts we have pleaded in our pleadings, and to elucidate the points of law.

Judge: Is there a method to this mad…

Lawyer: Taking all aspects in a cumulative manner, my humble self and my associates are merely seeking redressal. We are not holding a brief for any individual or a larger entity, or treating them as pari passu.

Judge: This is all Greek, or Latin to us. There is a time for everything and a due process.

Lawyer:  Your Lordship has hit the fastener on the cranium.  I would plead for a little more time to remind us all present in this Honourable courtroom about what Lord Denning wrote in his book The Due Process of Law. He said, and I quote, “What appears to be a new groove chiselled out by some innovation may in reality be an apt extension of the old groove into which it is led by the true spirit and intent of the Law, or it may be the old groove itself which looks new only because it has been swept clean of the detritus deposited by a line of imperfect decisions.”

Judge: May I remind the esteemed senior counsel that this court has been in session for an extended period already. I see you like quoting from learned tomes, let me remind you of a quote from Francis Bacon who said this of garrulous advocates: “A much-talking lawyer is like an ill-tuned cymbal.‘’

Lawyer:  Your Lordships, I apologise, it was merely an opine. I was just attempting to adumbrate my point with the collaborative wisdom of my betters. My point is that, without being censorious, the submission by my learned friend is perhaps not borne out by the records.

Judge: Are we finally getting to the case at hand?

Lawyer: I will satisfy your Lordship as to my intentions and argument. I just need to recapitulate for my own benefit if your Lordship will grant me the indulgence to come back to my principal submissions thereafter. If you trace the chain of causation you’ll find that my learned fried has no locus standi in terms of the particular statute that we are examining. I am herewith returning the stipulation to dismiss in the above entitled matter; the same being duly executed by me. I would like to place on record in this hon’ble court that I am not in favour of consensus ad idem. My submission is entirely based and made paraplegic on the mercurial stance of individual reputation and in favour of societal harmony.

Judge:  There is a glimmer of clarity in the aforesaid submission. The Constitution of India exposits cavil in its quintessential conceptuality and percipient discord between the venerated and exalted collective rights of citizens and the expression of an individual, thereby exploring manifold and multilayered, limitless and unfettered spectrums under the assumed power of reasonableness ingrained in statutory provisions relating to reviver.

Lawyer: I rest my case.