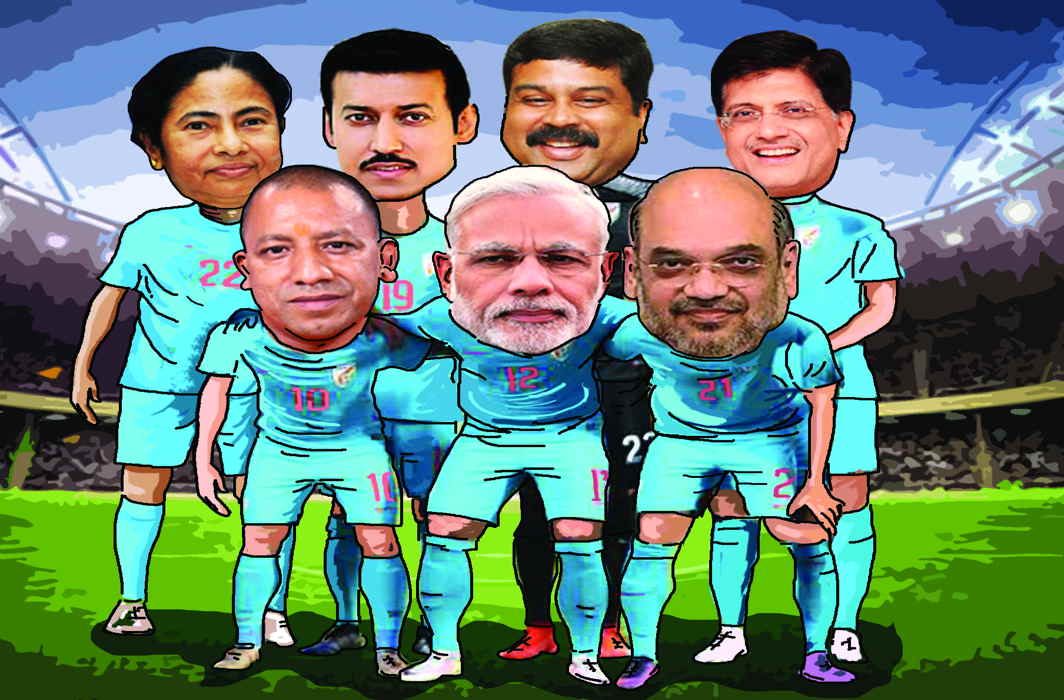 India may think it is deserving of a seat at the UN Security Council and considers itself a major player in world affairs, but one area where it is definitely not a player is at the FIFA World Cup. The 2018 edition kicks off next week in Russia and India has never made it to the World Cup except as spectators or media representatives. Despite that, some football enthusiasts from Kolkata and Kerala have compiled a list of players they think should be representing India. Here’s their selection for Team India:

Captain and Striker: Narendra Modi. He has unmatched international experience and the ability to pop up in the most unexpected places. There is also his legendary ability to switch from offence to defence, while his undoubted ability to confound his opponents with outlandish claims and his bewildering change of attire can outfox the most favoured teams. Displays loads of stamina while yoga keeps him fit and a big plus is that Sochi is familiar ground having just been there in the company of Vladimir Putin. Like Gareth Bale and Ronaldo, his secret weapon is the scissor kick, which can score a goal even when his back is to the wall.

Coach: Rajyavardhan Rathore: The man who has big stilettos to fill in the I&B ministry he now heads, is the ideal coach for the Indian team, considering his past role as a sportsman and Olympian medalist. His current obsession with fitness and the challenge he has thrown out to his teammates is what is needed, considering Indian sportsmen and their legendary resistance to embrace a fitness culture. One problem with Rathore’s selection is that he tends to go overboard in his fulsome praise of his captain, Modi. A Zinedine Zidane he may not be but other contenders for the post like Amit Shah have fallen out of favour lately.

Mamata Banerjee: Left Winger: Having conquered the Left bastion, it is a position she is familiar with, despite her insistence on discarding proper footwear for Bata slippers. Her strength lies in her unconventional approach to anything and her sudden, surprise attacks on opponents and allies alike, which leaves everybody flummoxed. Her party excels in rough tackles and she herself has a reputation for a streetfighter. She has also tried to instill a new strategy in the team which she calls poriborton, with mixed success, having met with fierce resistance from the right wing. She is also a penalty specialist since she has been distributing penalties on anyone who opposes her.

Yogi Adityanath: Right Winger:  He has that aggression and rabble rousing ability necessary to cow down the opposition. Plus, he is a specialist in coming out on top in encounters and no one can be a better exploiter of a right wing position than the Yogi. His position as the captain’s favourite has been somewhat diminished of late but his ability to strike fear into the opponent’s camp remains his biggest weapon. He has also trained a group of team-members, labelled anti-Romeo squads, to stop any opponent who comes within kissing distance of the Indian goal. His own goal seems to be to take the right wing position to extreme levels.

Midfielder: Piyush Goyal: The true worth of a midfielder is the ability to cover a lot of ground and switch positions whenever the captain demands it. His recent move to replace the injured Arun Jaitley is proof of that. He is also seen as a playmaker, which is a prime requirement for a midfielder, which entails dribbling and juggling various responsibilities, while creating opportunities for other teammates to profit from—as seen in recent newspaper coverage. He is also experienced in devising strategy for corporate clients, a skill he can put to very good use on the soccer field.

Sweeper: Amit Shah:  In traditional terms, the sweeper is considered the most vital position after the captain and usually plays the role of vice-captain. In football terms, he is considered a more versatile centre-back who “sweeps up” the ball if an opponent manages to breach the defensive line. Shah has shown the ability to steal the ball right from the foot of the opponent and above all, the sweeper’s skills to turn defeat into victory.

Goalkeeper: Dharmendra Pradhan:  The basic requirement of a goalie is to be as miserly as possible, especially when saving penalties. No one fits the bill better since he has just shown us how miserly he can be when it comes to saves when he reduced the price of fuel by one paisa!