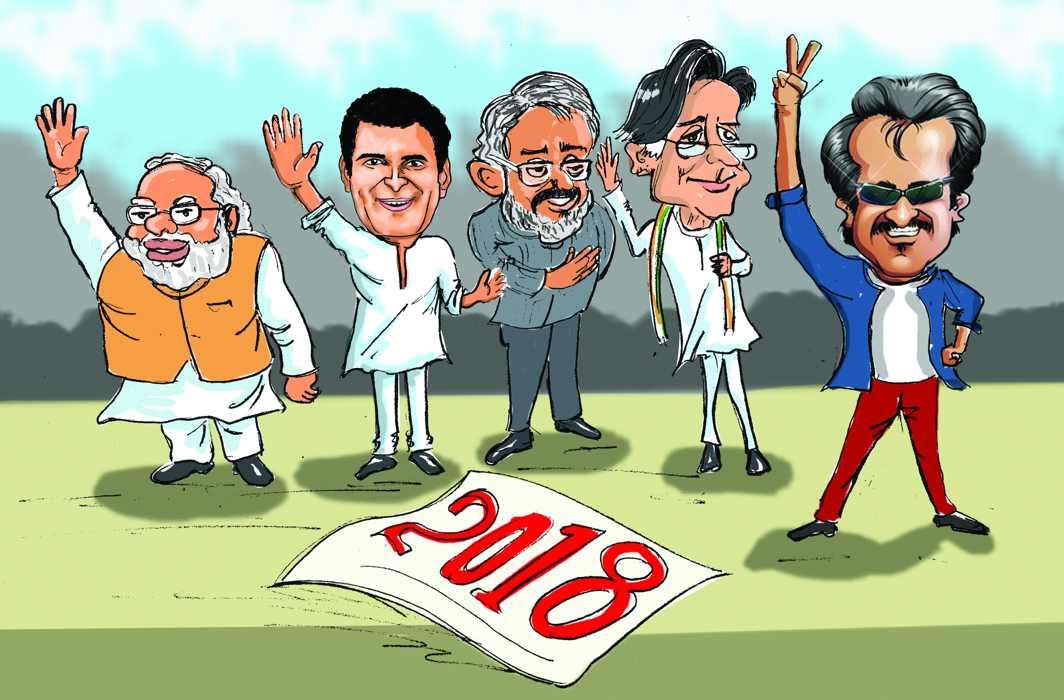 It’s now almost traditional among people of all faiths to faithfully record their resolutions for the year ahead and resolve issues that remained unresolved in 2017. It is, necessarily, an individual choice except in the case of certain organisations that believe in communal activity. Here are the more prominent of the individuals with their promises for the year ahead:

Narendra Modi: If the mountain will not come to Modi, Modi must go to the mountain. After Davos, it is back to Bharat to make a tryst with destiny and redeem my pledges for 2018. One is to wipe the tears from the eyes of all my Muslim sisters suffering from the evils of male dominance. I have always believed that one man cannot decide for so many. My other resolution is to ease the burden of my mitron in Meghalaya, Tripura, Nagaland, Karnataka, Mizoram, Madhya Pradesh, Chhattisgarh and Rajasthan by offering them financial support, subsidies and sops. I will be doing this in person, like Santa Claus, by making frequent visits to these states. The fact that they are having elections in 2018 is merely coincidental. Remember my 2014 resolution, sabka saath, sabka vikas.

Rahul Gandhi: I pledge to visit more temples. I used to go abroad to de-stress and for meditation but ever since I started visiting temples in India, I get the same sense of peacefulness and tranquility. It is like a rebirth. I also pledged to let my mother give up her onerous responsibilities so she could recapture her lost years and just look at how happy she looks riding a cycle in Goa! I now have inherited those onerous responsibilities and I pledge to redeem our vows to make the Congress Great Again. I also pledge to teach Pidi some new tricks to prove that every dog has his day.

Laloo Prasad Yadav: I have provided enough fodder for the media, the CBI, my political opponents and jail authorities. No more. In 2018, I promise to turn over a new leaf and confine myself to whichever room they allot me in jail. I am literally out in the cold—at home I had the loving warmth of wife and my large family but in jail it is freezing, despite having to face the heat. I also promise to lose weight, physically, not politically, by going on a strict diet of Litti Chokha, cooked at home. It will complement the goose that is cooked—mine.

Sanjay Leela Bhansali: I pledge never to make another film that has any trace of history, or geography, or even arts, since it all becomes one great epic battle with me as the big loser. I have heard of people losing an eye, but to lose an ‘I’ seems a bit much.  Normally, it’s the directors who say “cut’’, here it is anyone who wants to do the same without even seeing the movie. My resolution for 2018 is to take a leaf from the hit films of 2017 and only focus on love stories and songs which feature hero and heroine running around trees in some exotic location abroad, even if it has no connection to the plot. The boldest scene will be the hero removing his shirt, even if it has no connection to the plot.

Anantkumar Hegde: I pledge to fulfil my cabinet responsibilities and father new programs on skill development. I will keep in mind that not everybody has skills, for example secularists who are unaware of their parentage. If this requires that the Constitution of India be changed, then so be it. That is why we have been elected. My 2018 vow is to revive the animal spirits—everyone is born an animal but only those who pray at temples evolve into human beings. Jai Shri Ram.

Rajinikanth:  My 2018 resolution is for politics to join me. It is a small step for me but a giant step for mankind. My vote-bank is huge. I remember I once dropped my wallet while flying over Switzerland and that is how Swiss banks were created.  I plan to bring spirituality into politics, or turn politics into spirituality like that fellow Ramdev has tried to do. The trend nowadays is for people from humble origins to reach high office. First, there was a tea seller and I was a bus conductor. From zero to hero. Mind it.

Shashi Tharoor: My pledge is to counter all the debauched pedagogy that is engulfing us in its iniquitous embrace and also to withstand with stout heart and sound mind all the exasperating farrago of distortions and denouncements masquerading as truth. In 2018, I will reject and reduce sesquipedalian loquaciousness and the eternalist view which has become rodomontade.