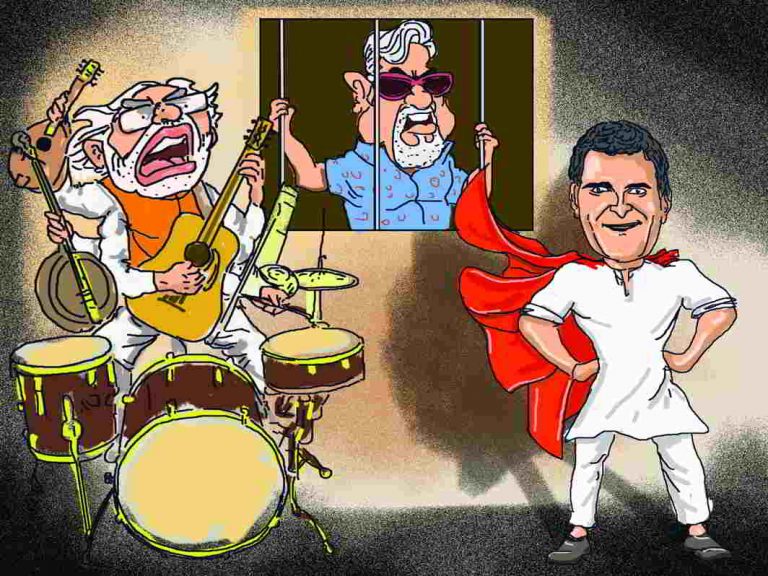 Person of the Year: Rahul Gandhi, for battling tremendous odds, some self-created, to end the year with his honour and reputation greatly enhanced. Without splitting heirs, it’s clear that there’s a new Raga being played and it is quite captivating. We can debate his Hindu credentials till the cows come home to the gaushala but his remarkable transformation is like watching Clark Kent turn into Superman. And to think it all started with a puppy, (not Pappu) called Pidi!

Villain of the Year: Vijay Mallya, the Kingfisher of Good Times, now a fugitive whose legendary flamboyance looks more flame than buoyant these days when spotted outside the Magistrates court in London. We now know that his extravagant lifestyle and hobbies like collecting luxury cars and high end property was funded by the Rs 9,000 crore he owes the banks but having spent most of his life at bars, a few more behind them should have a familiar feel.

Gadget of the Year: The Sex CD, as in the remarkable machine that is able to spew out videos of budding young politicians having sex just when voting for crucial elections are due. The young man in question, as in the appropriately-named Hardik Patel, is a 24 year old bachelor but the sex tapes were meant to puncture his electoral virility. They didn’t; a case of electile dysfunction?

Dominator of the Year: Narendra Modi, for mixing theatrics with oratory and turning politics into performance art. He roared like a lion, shed tears like a crocodile and displayed the stamina of the energizer bunny, all on instant call, but above all, his was a one-man show titled Modi Magic. Not since the one–man show of Indira Gandhi, despite being a woman, has India seen such a domineering personality as Prime Minister, redefined as Prime Mover, since he is always on the move, and always in campaign mode.

Word of the Year: Land jihad. Only in India, does the word jihad become appended to anything to do with Muslims, starting with Love Jihad, as in a Muslim marrying a Hindu, then we have Cow Jihad, which is Muslims and anything to do with cattle, and now Land Jihad which is a label given to Muslims who buy or rent property in so-called Hindu localities. The rise of the right wing is behind the communal labelling, which suggests that a Muslim family taking an apartment in a particular area is akin to a holy war. What it is akin to is a majority behaving like a minority.

Fashion Accessory of the Year: Pollution masks. With scary headlines such as Death by Breath and daily dissemination of pollution levels, Delhi’s fashion-crazy socialites were nowhere to be seen, or could not be seen, thanks to the pollution masks everyone was wearing. With the capital earning the dubious distinction of being the most polluted city in the world, AQ and PM became trendier than Armani and Pierre Cardin.

MVP of the Year: Most Valuable Prayer of the Year was the one which called for divine assistance in linking your Aadhaar card following the threat of losing access to your bank accounts, mobile phone, credit cards, insurance policies and almost every financial instrument. One flimsy piece of plastic is now the monopoly equivalent of a Get out of Jail card.

Movie of the Year: Padmavati, the epic, historical tale of a Rajput warrior princess and a love-smitten King which has made history by becoming the most talked about movie that no one has seen. The only character that was spotted was a buck, since the Censor Board and the Supreme Court kept passing it.

Clanger of the Year: Could classify as a low blow since Mani Shankar Iyer’s description of Narendra Modi as ‘neech admi’ cost the Congress a few seats in the Gujarat/Himachal elections. Modi’s revenge; branding Iyer as an anti national for supping with the devil—former Pakistan foreign minister—along with other anti-nationals—former Prime Minister Manmohan Singh and the former army chief among them—suggested that, at election time, one can stoop as neech as possible while still occupying the moral high ground.