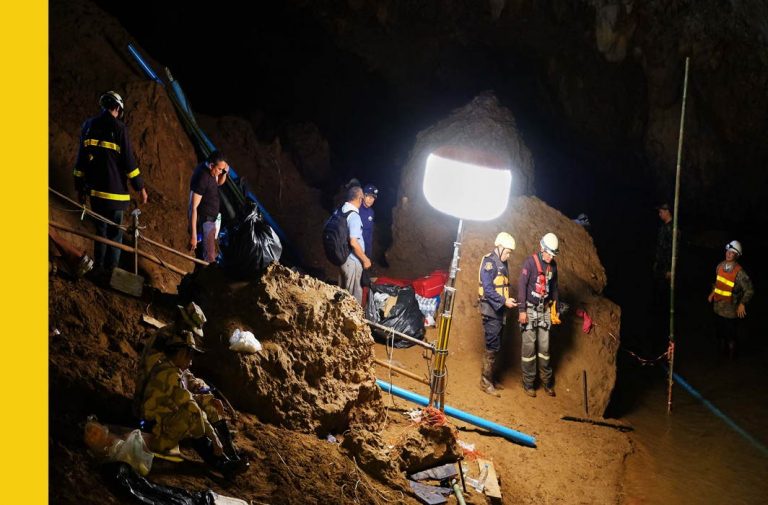 There were many remarkable aspects to the rescue of young boys from a cave complex in Thailand that captured the world’s imagination. Experts and divers from across the world showed up to help. The government did not make boastful claims, not did any opposition leaders get involved. No one’s identity, even the boys, was revealed, so there was no media hounding them or their parents. This was in such stark contrast to India, where this would have happened:

Official Spokesman: As you are aware, some boys have been trapped in a cave in Goa while on holiday. The Prime Minister has personally taken charge and is monitoring rescue efforts 24/7. The names of the trapped boys and the addresses of their families are on this list being released to the media.

PM: Mitron, have no fear, Modi is here. I will ensure that every single boy is rescued even if I have to negotiate the cave myself. This crisis is the result of 57 years of Congress rule. I have declared an emergency and all available assistance is being provided. I have received many calls from my friends, world leaders, offering assistance but I have said we have the expertise and resources to do this on our own. Jai Hind.

Opposition leaders: The government’s failures have been exposed. It has been 24 hours since the boys were trapped and we are hearing only jumla and no action. The government should resign.

Boys’ Parents outside the PM’s Residence: We demand action to save our precious sons. If the boys are not rescued immediately, we will mobilise all parents across the country. We elected this government and it must act fast or face the consequences.

Home Minister: Everything that can be done is being done. The SPG is flying in commandoes from Delhi, the navy is sending divers from Cochin, the RSS is sending volunteers from Nagpur and the National Disaster Management Authority is requisitioning private aircraft so they can get to the site as soon as possible.

Finance Minister: We will ensure that all required finances are made available. Currently we are deciding whether this should be from the finance ministry’s discretionary quota or the Prime Minister’s National Relief Fund but we will soon have a decision.

Goa chief minister: I have spent my childhood in that area, so I know it well. We will have the boys out in no time thanks to my personal knowledge and expertise in disaster management. I saved the state government from falling, so what are a few boys in comparison?

Congress Leader: This crisis is the result of having a corrupt CM who has taken money from the mining barons to allow them to dig caves on the beaches and exploit our natural wealth. He should resign immediately.

Goa Police Chief: I would request all my friends from the SPG, the RSS, the NDMA and other organisations to stop pushing and shoving so they can get their photos in the newspapers and TV channels. We need to get the rescue equipment in place and allow the divers room to breathe without oxygen masks. Also to allow all those ambulances to get closer so…

Volunteer: Sir, those are OB vans for the media, the ambulances are stuck behind them.

TV Reporter: I am standing here at the mouth of the cave, as you can see the rescue team is behind me waiting for me to finish my PTC, that’s Piece to Camera. I cannot see much with my Smartphone torch but the entrance looks very narrow and the boys must be in a desperate situation. I will now hand over to my colleague who is with the parents of one of the boys.

Colleague: Tell me, what are your feelings, faced with the possibility you may never see your son alive. Is he a topper in school? Does he take drugs? What is your caste?

TV Studio: Today’s burning question is should the coach who led the boys into the cave be burned at the stake or given the death penalty?

BJP Spokesman: Thanks to the untiring efforts by the Prime Minister, all the boys have been rescued and taken to hospital. The government denies the statement by Elon Musk that he was turned away at the airport along with his submarine. The government also denies the news reports that doctors treating the patients were beaten up following fake news on social media that four of the boys were from the minority community. Thanks to the rescue, India’s GDP has risen to a new high, surpassing the peak reached during the UPA’s term in office.