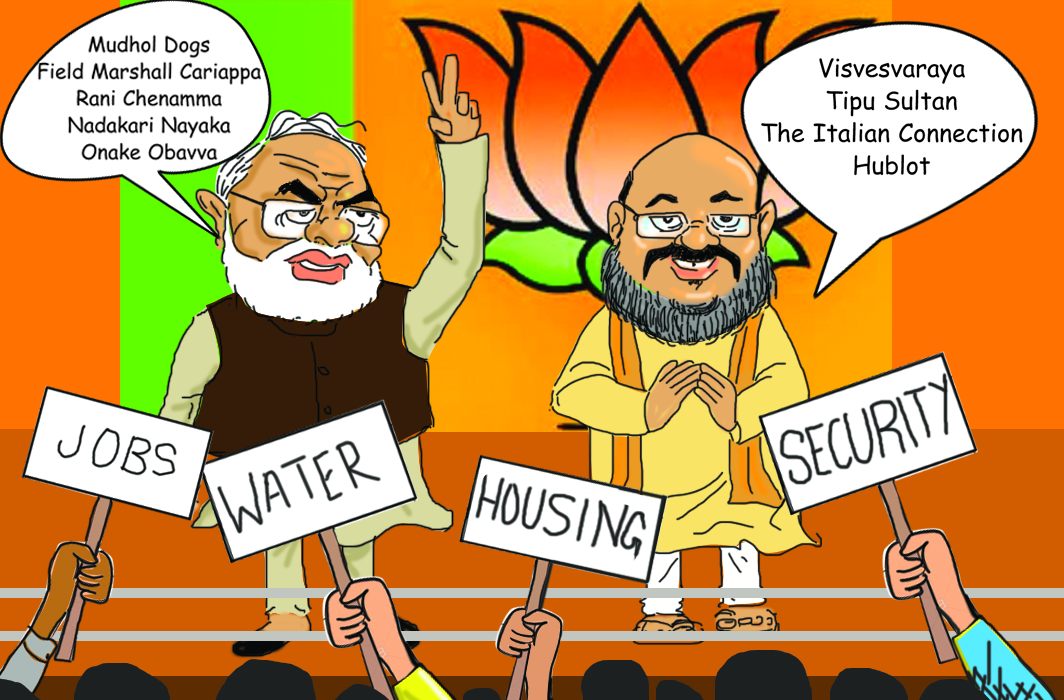 Fractured verdicts are bad for democracy, as we are seeing in Karnataka which is becoming more natak than kar. Ideologically committed governors, power hungry politicians and the obsession with a Congress mukt Bharat makes for a witches brew, in which the Constitution and morality melt in the morass. The problem with Indian democracy, as seen in Karnataka, lies in the issues that voters base their decisions on.  So what were the issues in this election? Here are some clues that explain why the voting went haywire.

Mudhol Dogs: A type of hound that comes from Bagalkot in the state. It was the first canine breed to be inducted into the Indian army. Based on that little known fact, in a dog eat dog electoral battle, Narendra Modi made a point of using his election rallies to say that the Congress needed to learn lessons in patriotism from Mudhol dogs. It was a dog whistle strategy, in which the population gets a message without understanding the meaning or context.

Field Marshall Cariappa: Also to do with the army and patriotism, Modi went to town—and village, and street corner—, declaring how a hero of Karnataka, Field Marshall Cariappa, the Indian army’s first commander in chief, had been humiliated by Jawaharlal Nehru. Modi’s obsession with the Nehru family often backfires, as did this election issue, since it was neither true or was backed by any historical evidence. It was left to Cariappa’s son to expose the fake news and wonder which history books Modi had been reading!

Rani Chenamma: A local version of Rani of Jhansi, she was the 18th century queen of the princely state of Kittur who led an armed rebellion against the East India Company, lost and was imprisoned. She has faded into the mists of time but Amit Shah’s election campaign resurrected her from relative obscurity to project the party’s pro-woman image, despite having just sacked Smriti Irani as I & B Minister.

Nadakari Nayaka: An even more obscure ruler of Chitradurga who enjoyed a temporary revival after the BJP campaign hailed him a ruler who the Congress government had forgotten. Of course, they left out the inconvenient fact that so had a majority of the population of the state.

Onake Obavva: Also not exactly a household name, but the BJP’s archeology buffs had a grand time digging up forgotten individuals like Obavva who happened to take on a Muslim ruler, Hyder Ali, armed with only a pestle. The BJP campaign pounded away on the fact that here was another local hero that the Congress had ignored. In fact, the BJP campaign turned out to be a history lesson for a large section of Karnataka’s voting population, and they clearly fell short.

Visvesvaraya: The Diwan of Mysore who was better known as an outstanding engineer. He was, in fact, honoured as the pre-eminent engineer of the times and 15 September is celebrated as Eng-ineer’s Day in his memory. Amit Shah’s efforts at social engineering came a cropper when he used an election rally to refer to Visvesvaraya as a ‘poet’.  The two disciplines cannot be further apart but in election time, why let facts come in the way of a good story?

Tipu Sultan: The Muslim ruler of Mysore was likely to be a prime target of the BJP campaign and so it proved with Shah and Modi slamming the Congress for celebrating his birth anniversary and calling it vote bank politics. Judging by the eventual results, the BJP’s vote bank—Amit Shah had predicted 130 seats—seemed to have been hit by electoral demonetisation.

The Italian Connection: The BJP cannot resist bringing up Sonia’s Italian ancestry on every occasion, with elections putting it on autoplay. This time, both Modi and Shah accused the Congress CM of using imported Italian toiletries, as if they were some illegal drugs to be snorted or sniffed.

Hublot: Thankfully not an Italian product but a Swiss one, the Rs 40 lakh Hublot watch gifted to Siddaramaiah became an inevitable election issue with the BJP claiming it was a bribe from an unnamed businessman.  No proof required at election time.

Post Script: Clearly, election issues have become more about history than contemporary needs, like jobs, industry, housing, roads, privacy and women’s safety. With reference to history, as Marx famously said, it repeats itself, first as tragedy, then as farce.