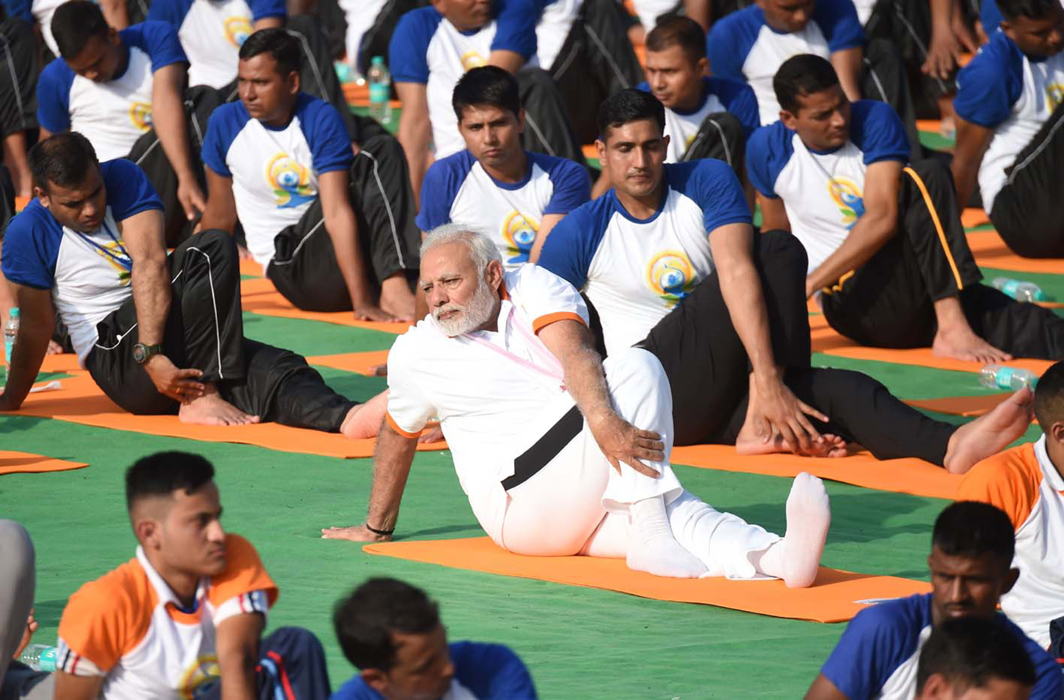 We are being led to believe that yoga is India’s greatest contribution to global wellness and will usher in international peace and prosperity. Billions of people twisting and turning and breathing through one nostril in unison, will end terrorism, fraud, and incendiary Facebook posts. Shashi Tharoor tweeted that yoga is not simply about twisting into different positions like a pretzel, but the PM reminded us that we should not ignore the gems of our own heritage. There are 1,300 asanas but here are some favourite poses.

Tax Eva-son: Currently, the most popular fad sweeping the country, which involves sweeping money taken from Indian banks into accounts abroad, with the UK and Panama being the Most Favoured Nations. Tax Eva-son allows the practitioners to turn black into white and live happily ever after in luxury villas or country houses, while those still in India fall back (another integrated asana) on deniability, or the ability to claim they have achieved moksha and are not subject to earthly laws or prosecution. Involves a lot of running, lying and hiding in plain sight.

Son Salutation: Also called Surya Namaskara and meant to be a salutation to the sun, in India it translates into sycophancy over the son. The practitioner, usually a member of a political party, no matter how senior, will bend forward, hands folded and head bowed in a supplicant pose. The gurus of this asana are the Gandhi family, from Nehru’s daughter to her son and now grandson. Narendra Modi’s followers, more ardent than most, believe he is the son of a higher power, while the Patnaiks, Badals, Hoodas and Lals of Haryana and Akhilesh in UP are the gurus of the son salutation, in descendant order.

The Ramdev Sutra: It is not a pretty sight, watching Baba Ramdev doing his pranayama, his hairy belly going in and out like a bellow on steroids, but it is a sutra worth emulating—his Patanjali which has sprung from his humble yoga teacher origins, is India’s fastest growing FMCG, valued at `10,561 crore or $1.6 billion. It involves lots of heavy breathing and sitting cross-legged while in proximity to the rich and powerful. Apart from those who cannot stomach his methods (rival Yogi Adityanath is one), the Patanjali pose is envied across the globe, truly a gem of India’s heritage, as Modi says.

The Rig Veda: Usually equated with a much revered and ancient Indian text, in modern times it has come to be associated with elections in India and is generally seen as an exercise to acquire power. Every time there is a prestige election in the states or a general election, the Rig Veda comes into play. It involves a lot of stretching and manipulation of the raised forefinger which must have a black mark, to show intent. Politicians of all hues and from all parties find the Rig Veda a powerful tool while in states like West Bengal, the Rig requires a more militant posture and can be dangerous to the health, depending on which side you are during the exercise.

The Dharna-asana: A method taught by its modern guru, Arvind Kejriwal. It involves lying on your back, preferably on a sofa in someone else’s residence, and staying in that position for days without moving a muscle, or a file. For some practitioners, it can be combined with fasting and some ambulatory extraction. The original creator of the dharnasana was called the Mahatma, or great soul, while Kejriwal has tweaked the exercise so there is the least wear and tear on the soles. It is a difficult posture to maintain for long so beginners should be wary, since it can lead to health problems and require a visit to another wellness centre to get cured.

Shove-asana: Also known in parts of the country as downward dog, it involves furious motions, including the use of sticks and stones, and in some advanced versions, even hangings, to cleanse the system of impurities. This also involves fakery and bigotry since most of the victims are innocents. Usually involves a mob, or safety in numbers, even if the victims are in a minority. Adherents like to label themselves with different classifications, with cow protection or child protection being the most popular while the unfortunate victims are downward dogs.

Silent Yoga: The latest fad which originated in the capital, spearheaded by bureaucrats who believe it can improve their circulation and lower blood pressure and stress by not doing anything at all. Involves a face-off and a silent protest to show it is working, or not, as the case may be. Highly individualistic exercise since it involves ego and minimum use of the hands and feet. In fact, this is one yoga posture where nothing moves, especially files.