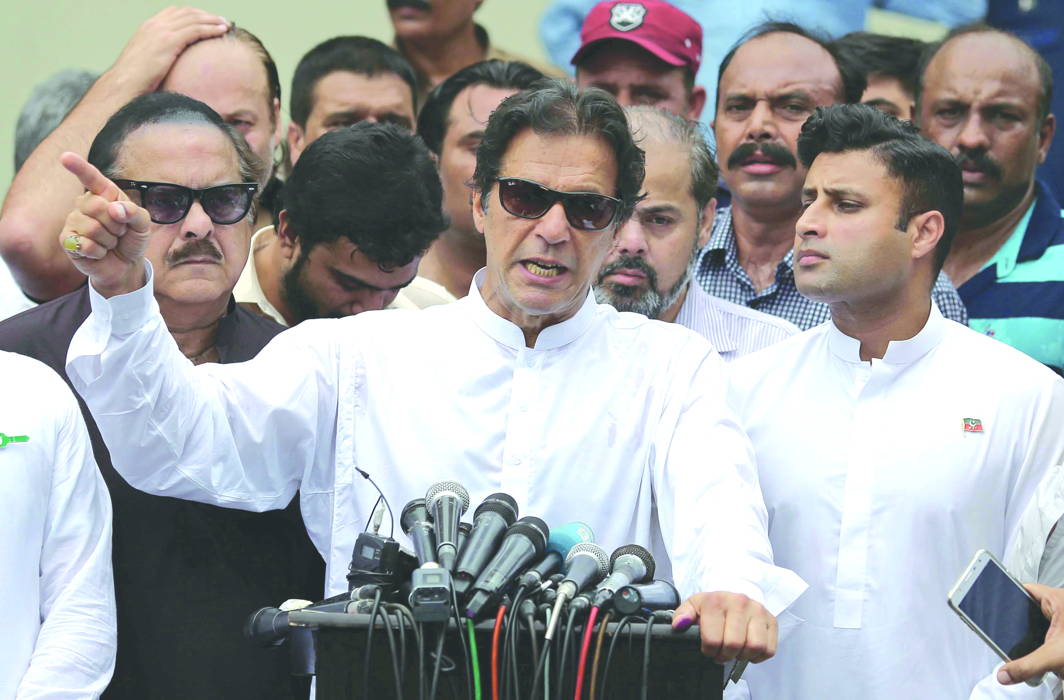 At some easily identifiable Indian television channels, coverage of Pakistan always ranges between hysterical and hyper-national, and oftentimes incoherent. Which is why the blanket coverage of the Pakistan elections and Imran Khan’s new innings followed the same script, turning hope into hopeless. Here’s how the debate went, resembling the commentary of a cricket match.

TV Anchor: Pakistan has just gone through a fraud election with no umpires and the in-form batsman confined to the pavilion. General, what do you make of the results?

TV Anchor: Sir, its 10 am, isn’t it a little early to be asking for a shot of whiskey?

RIG: I wasn’t referring to the brand, I meant Imran Khan is the choice of the army officers who run the country. They continue to play the role of selectors.

TV Anchor: In the interest of balance and fairness, ours I mean, let me ask our friend sitting in Islamabad what he thinks of that statement.

Pakistan Commentator: Imran Khan’s popularity has been on the rise, people, especially women, came out to vote in large numbers, and despite some complaints of rigging by opposition parties, no one else in Pakistan is calling it a no ball.

Retired Indian Diplomat: (raising his finger like an umpire) Match fixing, nothing but match fixing.

TV Anchor: His marriages or the election results?

RID: Both. The army fixes the courts to disqualify his opponents and he bowls maidens over. India should take this up at the UN General Assembly and the ICC which examines incidents of match fixing where Pakistan is already a world leader.

Second TV Anchor: Welcome to the most watched TV channel for news on Pakistan. In Breaking News, we foresee the break-up of Pakistan now that a cricketer has been made captain of the country. Is that a correct assessment General?

RIG: On your rival channel, I was asked the same question and I said the elections had been rigged. Imran Khan has won the toss but the match has been lit, so to say. Between Imran and the army, India now faces a two-pronged attack.

BJP Spokesman: Pace and spin, but let me add my own spin. We will have to put in place a deep fine leg to guard against any Yorkers and in-swingers.

Anchor: Why a deep fine leg?

BJP Spokesman: To protect ourselves from the deep state, obviously. As my previously uniformed and well informed friend said, the two pronged attack is a reference to the two nation theory. Now, after this ball tampering…

BJP Spokesman: I meant bail tampering. By refusing bail to Nawaz Sharif, it has ensured that Imran’s PTI wins. We need to put on our guards to ensure there is no ball tampering by reviving the new rules of the game, as in the two nation theory.

Anchor: I agree, we have to take fresh guard…

Congress Spokesperson: My BJP friend is creating a farrago of untruths by coming up with these obscurantist, rodomontade ideas.

BJP Spokesman: This is the kind of abusive language the Congress speaks, all the time sledging the opponents. Putting it in plain English, I am talking of Taliban Khan taking over the reins of government. We have to fear the worst and prepare accordingly. We already have an aggressive captain of the Indian team.

BJP Spokesman: Narendra Modi. We need to go on the front foot and establish a Hindu national culture as the core identification of an Indian. Now that Taliban Imran is there, can we trust our Muslims not to support him like they did in that cricket match in Srinagar?

Congress Spokesperson: The fall of wickets continues. Has the BJP started Taliban in Hinduism? This is the way we create a Hindu Pakistan.

BJP Spokesman: You are speaking with a forked tongue, how can you mention Hindu and Pakistan in the same breath?

Congress Spokesperson: Will Modi give Imran a hug if they meet? I fear the pitch is being dug up and plans are on for relaying it to favour their side.

Anchor: English please, or I will have to refer this to the third umpire.

Congress Spokesperson: I meant if they win the next election, they will have all the elements they need to tear up the Constitution of India and write a new one.

BJP Spokesman: There’s no mystery ball here. Imran is being sent in by the army to play an innings in a position familiar to cricketing fans.

Anchor: And what is that?