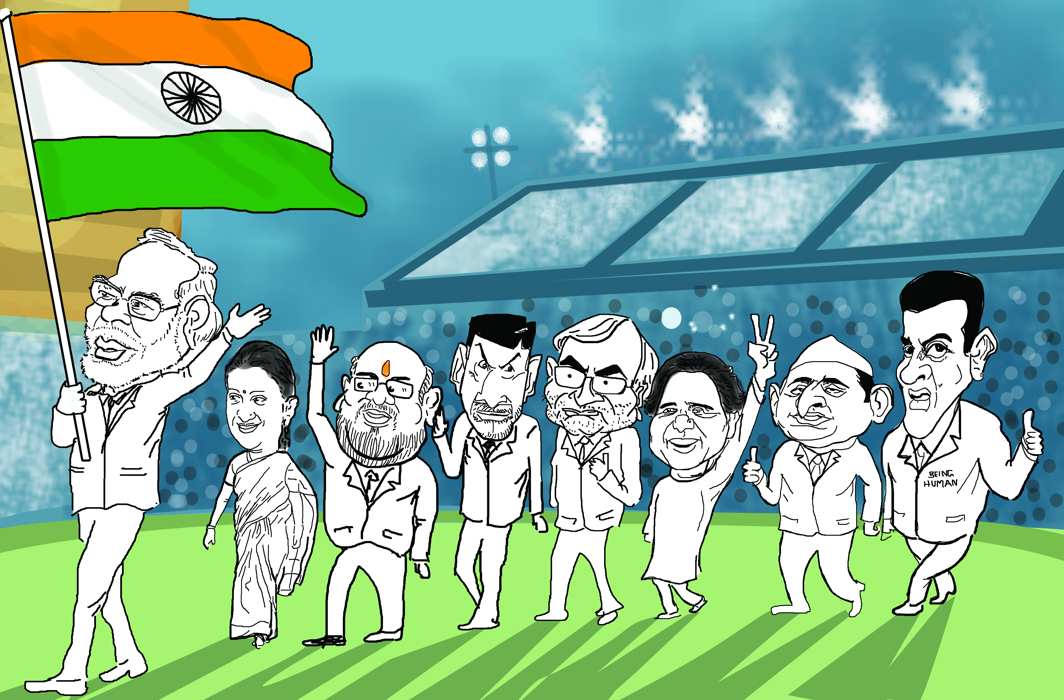 The usual media hype has accompanied the Indian contingent to the Commonwealth Games being staged in Australia’s appropriately named Gold Coast. India’s gold tally is already being talked about without much objectivity in the analysis. A genuine gold rush would have been possible if the Indian selectors had chosen the following superstars who truly excel in their chosen sport. The alternative Indian team would include:

Smriti Irani/Backstroke:  She has been swimming against the tide lately, straining to get ahead of the pack by pushing herself to the limit and trying to break records set by other stalwarts like Rajiv Gandhi and Vasundhara Raje. Like her, they too wound up doing the backstroke after their attempts at freestyle came to naught. The lessons here were obvious: trying to create a splash by intimidating inconvenient opponents can lead to disqualification, and, number two, always consult the coach before switching disciplines.

Salman Khan/Shooting:  The aim was always dead on—to use superstardom to showcase being human. However, if the courtside judges have got him dead to rights, then his original aim was off and, even if he did hit the target, the buck now stops with him. Now that he has been ruled out of range, his huge fandom will ensure that he is soon back in the game. Considering his stature and commitments—big game.

Nitish Kumar/High Diving: It’s literally reaching Olympian heights, and then taking a plunge to unknown depths. If India has a gold medal contender for the High Dive, it is Bihar Chief Minister Nitish Kumar, who was riding so high till recently, and now his fall, in political terms, is akin to a world championship dive. It is, literally and in poli-tical terms, a splash of cold water to his vaunting ambitions and a reminder of the most basic lesson: in politics, as in all high-level competitions, there are no permanent friends or permanent enemies.

Chandrababu Naidu/Cycling: The Andhra Pradesh chief minister has been in hot pursuit of a better deal, and his latest Ronaldo-type bicycle kick as head of a rally, shows he is in peak form and ready to battle with the reigning champions. Competitive cycling is based on split timings, and Naidu’s aim is to use the split—with big brother—to try and sprint ahead with new partners and a new battle cry. Getting atop the podium is just a case of who peddles faster.

Narendra Modi/Heavyweight Wrestling: With that 56 inch chest and the deadly, patented Modi hug, he has pinned all his opponents to the mat. The hug has become feared among both friends and opponents and it is reminiscent of Dara Singh’s famous finishing move—the Airplane Spin, which is another Modi special, going for spins on airplanes. Of late, however, his near-total dominance of the arena has begun to wane and there are signs that he is losing his feared grip but still, he remains as competitive as ever, and always ready for a fight. His big test will be in the 2019 Games, with a host of challengers emerging from the sidelines.

Akhilesh Yadav & Mayawati/Mixed Doubles:  The key to the success of a mixed double pairing are complementary skills and strengths. In recent competitions, they have emerged victorious when paired together and going forward the partnership look set to register new conquests. The key to the pair’s success is their fan base, which, if intact, could lead to a place in the winner’s enclosure in the 2018 Games.

Vijay Mallya, Nirav Modi/Hop, Skip and Jump: India seems to be producing multiple world champions in the sport considering the rich haul of gold—and diamonds—individuals have garnered and then hopped, skipped the country and jumped bail. Mallya. Modi, Lalit Modi, Choksi, Jatin Mehta, could also bring home the gold in the pole vault, considering the number of vaults they have cleaned out.

Chef de Mission/Amit Shah: The main requirement is someone with organisation skills and an expert at the art of dirty politics. An ability to upset the odds by winning over rival competitors by hook or crook, is an added requirement. Only one man qualifies for the post of chef de mission—Amit Shah—he is permanently in mission mode anyway.