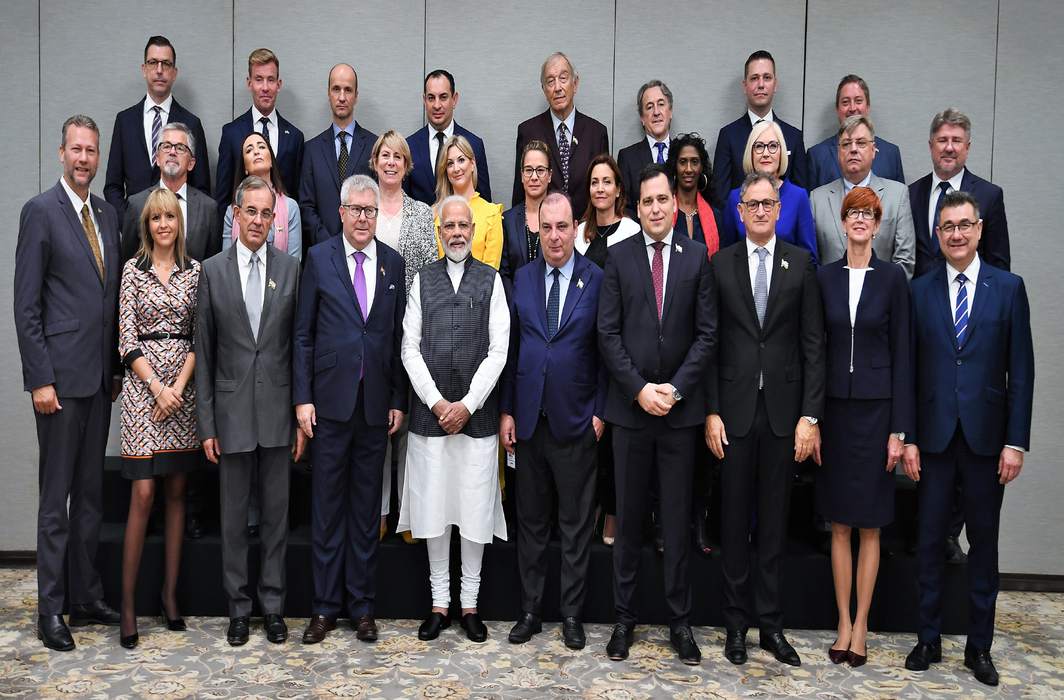 The government of India took a giant step, well, not exactly Neil Armstrong level, but a Bigfoot step nevertheless, in inviting two dozen Members of European Parliament to Srinagar to see for themselves how normal everything was. The fact that the actual invitation was sent by an obscure power broker and not the Ministry of External Affairs did nothing to dampen the mood, as was evident from the itinerary.

Army Commander: Distinguished guests, welcome to our base. As you will have noticed on the drive, the streets would have been deserted and the shops shuttered. Now, that is an old Kashmiri tradition, to welcome distinguished guests, they clear the roads and stay indoors so that your travel is seamless, without obstacles. The locals call it Kashmiriyat…

MEP: Jolly good, I was almost tempted to give a Nazi salute like I do at my election rallies, but I did happen to see some strange looking street furniture all along the way here.

Commander: Oh yes, those are police barriers, a very important tool in our fight against Pakistan-sponsored terrorism.

Commander: It is used as barrier to safeguard innocent civilians from attacks by terrorists and stone pelters. Often, we get caught in the crossfire but that is a small price to pay for keeping the country united, healthy and happy.

MEP 2: We could use some of that in my country, France, where my leader, Marine Le Pen, has often protested against the usage of streets and squares in French cities for Muslim prayers.

MEP 3: General, we are being informed that five labourers were killed today by militants. Was there no protection for them?

Commander: Sorry sir, but these are migrant labour from outside Kashmir and we are only tasked with protecting the local population.

MEP 2: Yes, in my country, my leader Le Pen and my party have also been warning against illegal immigrants…

MEP 4: What a delicious lunch you have laid out for us. It introduces us to some local flavour.

Commander: Yes, you must try the goshtaba, minced balls, which is what some Kashmiris are saying we are doing to their menfolk, Ha! Ha!, but don’t believe all these cooked up stories.

Official spokesman: We saw an article in an internationally-respected journal called Organiser which said that to remove stress, frustration and envy from your life, switch off your TVs, disconnect all your computers and mobile devices, and switch to Patanjali products. So we merely followed expert scientific advice. It is a temporary measure, just like Article 370 was.

MEP 6: That is what your National Security Adviser told us during his lunch. He used a phrase I didn’t quite understand, achhe din?

Commander: It is a popular Hindi phrase which translates into new India where all evil is eliminated and a good time is had by all, except a handful of serial protesters. In any case, the next item on your fact finding mission is a shikara ride on the famous Dal lake. It is a proven stress buster.

MEP 5: We passed that on our way here, but it looked deserted and we didn’t see any tourists?

Spokesman: A local custom. When there are distinguished guests, they like to give you ample space and privacy. We are on our way there now and you will see for yourself how normal everything is.

MEP 3: Yes, Now that we are at Dal Lake, I can see so many tourists suddenly surrounding us in what looks suspiciously like speedboats. They all seem to be fit looking males.

Spokesman: It’s a local custom. They are here to ensure you have a pleasant, meditative experience without having to worry about anything. Naturally, they are trained in counter-insurgency to protect innocent civilians from the villains across the border.

Hermann Tertsch (MEP from Spain): Yes, I can see that some people are being kept away from us.

Spokesman: It’s a local custom, just ask the Kashmiri pandits. As you can see, everything is calm, peaceful and tranquil, and that is a fact, since you are all here on a fact finding mission. Enjoy the junket,…I mean the ride.