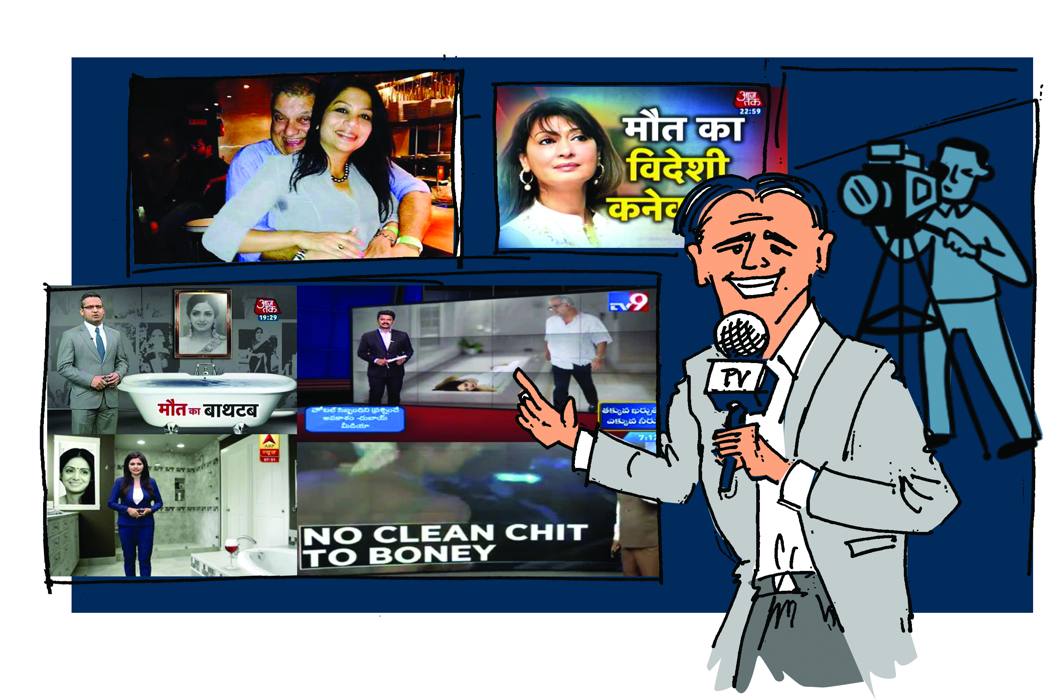 The tyranny of TRPs had changed the entire edifice on which television news was built on. It now resembles a hangman’s platform where the unfortunate victim—the latest target of rabid anchors foaming at the mouth—is hung, drawn and quartered even if he/she is dead or hiding in parts unknown. By morphing images and macabre creativity, television news is now sheer entertainment based on horror, shock and awe. Here’s how TV channels operate these days:

Anchor: What are we getting on the Karti Chidambaram story? Our rival already has him wearing shorts and a funny hat. We must do better.

News Coordinator (NC): We have more about Indrani and Peter’s testimony than them. Our Mumbai reporter has said that in court, there was mention of another scam involving Hindustan Lever! Cheating a MNC? That should gain us some TRPs.

Business editor:  He said he was not a Hindustan leaver, not lever…but we do have sexy photos of Peter and Indrani…

Anchor: With drinks in their hands?

Business Editor: Can’t they sue us for morphing images?

Anchor: You have a lot to learn. If the subject is dead or in jail, they can’t do a thing. Look at all those images of Sridevi we used, with Boney standing next to the bathtub, our rival showed a glass of wine on the rim; we showed Sunanda’s dead body in a hotel room…Murder, alcohol, sex, extra-marital affairs, politics, its TRP heaven.

NC: It’s also a question of safety in numbers. If almost every one of the 100-odd news channels in various languages are doing the same thing—climbing into bathtubs, making up fake news about wild alcohol-fuelled parties, pill popping, heartache and marital discord, who will sue them all?

Anchor: What we need to boost TRPs is Karti with a mystery woman. Any luck?

NC: Nothing so far. We are trying to get a photo of someone who looks like him climbing into bed with a woman—one of our reporters looks like Karti from a distance. We are getting it shot.

Anchor: Here’s what we need: photos of Karti outside a house in London so we can say he may have bought property abroad. We also need images of Chidambaram Sr with currency notes.

NC:  We have him with a briefcase.

Anchor:  That’s the budget photo, our audience may be thrill seekers but they are also fickle—look at that Telugu channel, they are showing a rear image of Karti with his arm around someone and they are asking if that person is Peter Mukherjee. We need to go one better. We need to get Rahul Gandhi into the story. Or Shashi Tharoor, preferably both. We know TRPs spike when those two are in the frame.

NC: (excitedly) We have found a photo of Chidambaram Sr., with some currency notes in his hand.

Anchor: Well done, what was he doing actually?

NC: He was paying off a cab driver at the airport and it was when the Congress was out of power, but we don’t need to explain all that.

Anchor: Great stuff, now we need to bring Rahul Gandhi and Tharoor into the story somehow, adding Priyanka Chopra would be icing on the cake.

Political Editor: There is one connection. Abhishek Singhvi is the lawyer for Karti and also for the National Herald case in which the Gandhis are involved. We can come up with a conspiracy theory based on that.

Anchor: Not TRP-sexy enough. Did RG and Chidambaram attend Shashi and Sunanda’s wedding? A photo of all of them together will allow us to caption it Explosive! Exclusive! Damming! Devastating!

NC: But sir, those banners are what we use for routine stories.

Anchor: We can think up some more adjectives. Find a thesaurus and get the graphics people to come up with some shocking images, sexy images, images of debauchery, wine and women, men and men, Sunanda and Rahul, Shashi and Karti, I’m getting confused.

Reporter: (rushing into newsroom) Sir, I have a great story. A BJP leader has just run over nine schoolchildren in his SUV while drunk.

Anchor:  Here in Delhi? Run it as lead, do we have dead bodies of kids?

Reporter: No sir, it was in Bihar.

NC: It’s time for our morning prayers. Let’s head to the puja room.

Intern (to NC): Sir, which God are we praying to? It looks like a graph?