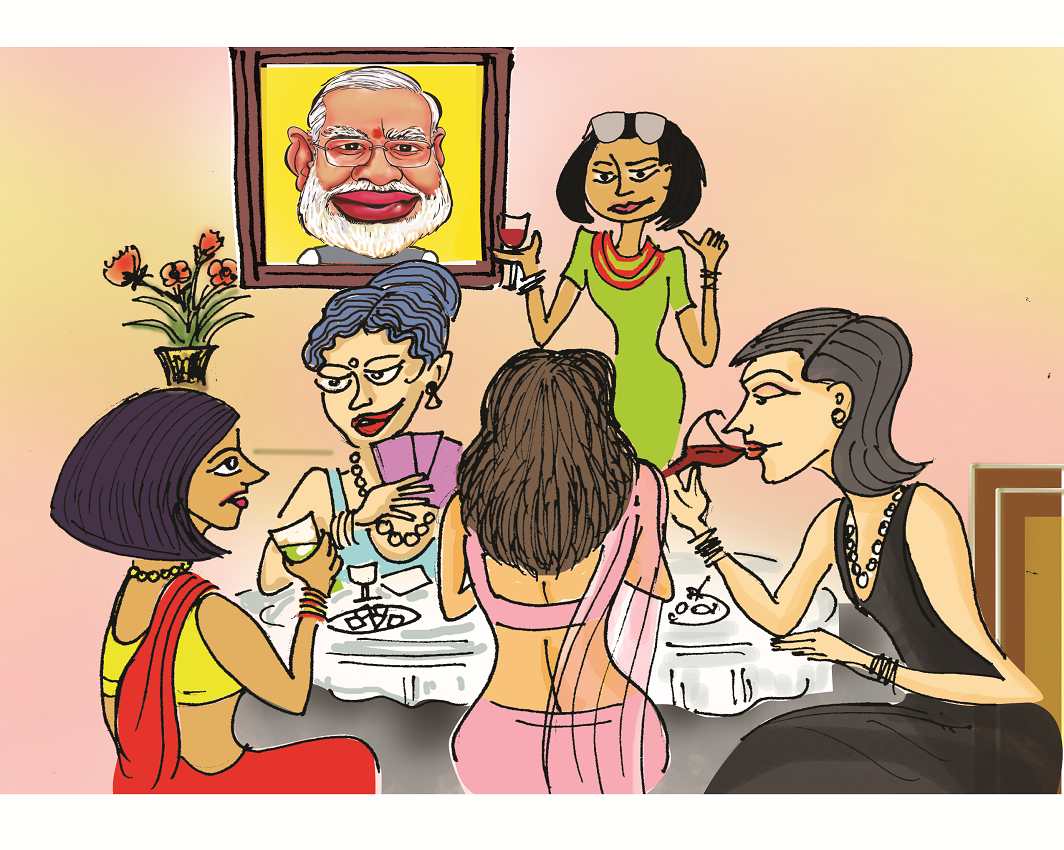 The Narendra Modi government completes three years in office and, according to surveys conducted by a little-known organisation called Local Circle, a majority of Indians give it three very loud cheers. Does he really deserve such a high approval rating? There is more established and credible Local Circle called Kitty Party that could be a better barometer. Listen in.

1st Kitty Party Member: Three cheers everybody. I suggest we shift to a five star. Ever since Modi has come, we have become the envy of the world. His 56 inch chest, how he has taken on Pakistan, shaken the terrorists, stopped black money, ended corruption…

2nd KPM: Wait a minute, who says corruption has ended? Just this morning the NDMC guy demanded one lakh to regularise some illegal construction in our house, on the way here, the cop took a bribe for letting me run a red light and my son got admission in an elite college thanks to my husband promising a donation…

2nd KPM: Some people would call this witch-hunting.

3rd KPM: Please remove Shashi’s name from that list, he’s sooo cute, and that accent, I am trying to get my husband to speak like him.

2nd KPM: How did his name get in there anyway?

Ist KPM: No, Nitin my driver.

3rd KPM: These drivers know everything. They have their own network of informers.

Ist KPM: He also told me that Modi keeps an eye on everything, all files of deals over five crore are sent to him after clearance. He has put cameras everywhere so no one can hand over bags of money. The son of a minister has been sent abroad because he asked for a commission, others have been quietly sacked…

3rd KPM:  Your driver told you all this?

Ist KPM:  His cousin brother is driver to a big minister, I can’t say the mantri’s  name, tauba, tauba, because it would land me in trouble.

2nd KPM: It’s just us in a restaurant having a kitty party, why would it get you into trouble?

Ist KPM: I told you, there are cameras everywhere. I could be hauled up for being anti-national.

3rd KPM:  Arun says Modi has made every Indian proud.

3rd KPM: No, Arun my gym instructor.  His business is booming because every Indian wants to look great, do yoga, puff out their chests and use Patanjali products. To be Indian nowadays means a lot of physical effort, so one needs to stay fit and build muscles.

2nd KPM:  To go to fight on the Pakistan border?

3rd KPM: No, to take on the anti-nationals, beat up the cow smugglers, thrash those students in JNU to teach them about nationalism, and those butchers selling meat need to be cut to size. We have to be fit enough to stand every time the National Anthem is played. I can’t stand those who sit when the Indian flag appears on the screen. Ever since Modi has come to power, all these enemies of the state are being exposed. It’s all very exciting.

2nd KPM: No, I meant all those muscles and superpowers.

Ist KPM: True, he really has made India a superpower.

1st KPM: No, Modi. The economy is booming, people are happy, we are safe in our homes thanks to our brave soldiers and those wonderful martyrs, Bharat mata ki jai….

2nd KPM: Let’s not get carried away. Farmers are committing suicide, there are no jobs, the IT industry is in a jam, Yogis are becoming chief ministers, the minorities are….

3rd KPM: I have it on good authority that the decision by the International Court of Justice on Kulbhushan was only because they didn’t want Modi to destroy Pakistan.

2nd KPM:  Who is this authority?