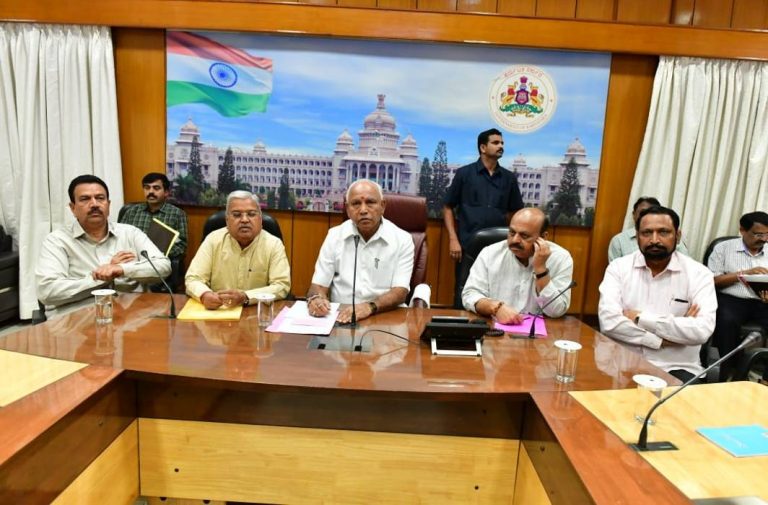 Yediyurappa: All those present say aye

Yediyurappa: All present and accounted for. Let’s begin this emergency cabinet meeting. All in favour say aye…

Chaprasi: May I welcome you for the third time in the chair since the other chairs seem vacant. May I venture to ask when they will be filled?

Chaprasi: Yes, he must be tied up with the Kashmir problem; they too don’t have a cabinet any more, or a government for that matter.

Yediyurappa: If there are empty chairs it does not mean we can stop serving biscuits; where are my favourite ones?

Yediyurappa: It’s the economy, stupid. Luckily my comments will not leave this door. By the way, what are those piles of underwear doing in the corner? I know we have been spending nights in the Vidhan Sabha but this is no more required…

Chaprasi: Sirji, I read that sales of underwear have dropped which can be revealing in more ways than one: they are talking of an underwear index after sales fell sharply in the June quarter as Indian consumers struggled to stretch budgets to cover discretionary spending. This will be our underwear index.

Yediyurappa: Are you an economist?

Chaprasi: Sirji, I am an Economics major but as you know jobs are scarce, so I joined the government because I was told no one gets sacked—except ministers of course.

Yediyurappa: Talking about ministers, since we do not have a finance minister or agriculture minister or industry minister, I am clearing an expenditure of Rs 1,279 crore pertaining to development work in Shivamogga. They have been badly hit by the downturn.

Chaprasi: Yes, Shivamogga, named after the great God and also home to great dynasties, the people of your constituency are fully deserving of the munificence that the centre has promised the state.

Yediyurappa: As you can see there are only so many vacancies and it will be a game of musical chairs to try and accommodate everyone—there’s the BJP’s Karnataka unit who are angry at being left out of the cabinet, knowing that 12 out of 15 berths would have to be reserved for the rebel Congress and JD(S) candidates. I will also face dissent from regional satraps and powerful lobbies. I may even have to induct someone from the minorities and a woman to keep myself from being attacked by the feminists and jholawallas. If only I had a free hand?

Chaprasi: But sir, you are the only one in the cabinet, no one has a freer hand except in the Congress.

Yediyurappa: It has taken me 23 days to get a cabinet, does that strike you as a free hand? They have appointed a state BJP president without even consulting me. My every move is being monitored; even that fly on the wall could be a listening device. Namo technology is the hot new thing. Every single cabinet member will be vetted by the Three Wise Men…

Chaprasi: I thought it was the Power of Two?

Yediyurappa: They have added a third, that Doval fellow, to ensure no cabinet members are running NGOs with foreign funding, have studied in JNU, have ever dealt with Chidambaram, have visited Kashmir and are not intellectuals. Between the rejects, the rebels and the disqualified, I hope my term lasts longer than the three days which is my past record.

Chaprasi: It has already been 23 days, albeit without a cabinet which makes decision making easier.

Yediyurappa: You are right. Remind me to give you a promotion to cabinet rank when a berth is free and in my control. Now, let’s call this cabinet meet as adjourned. Is there anything I’ve forgotten?

Fly on the wall: The floods, and flood relief?