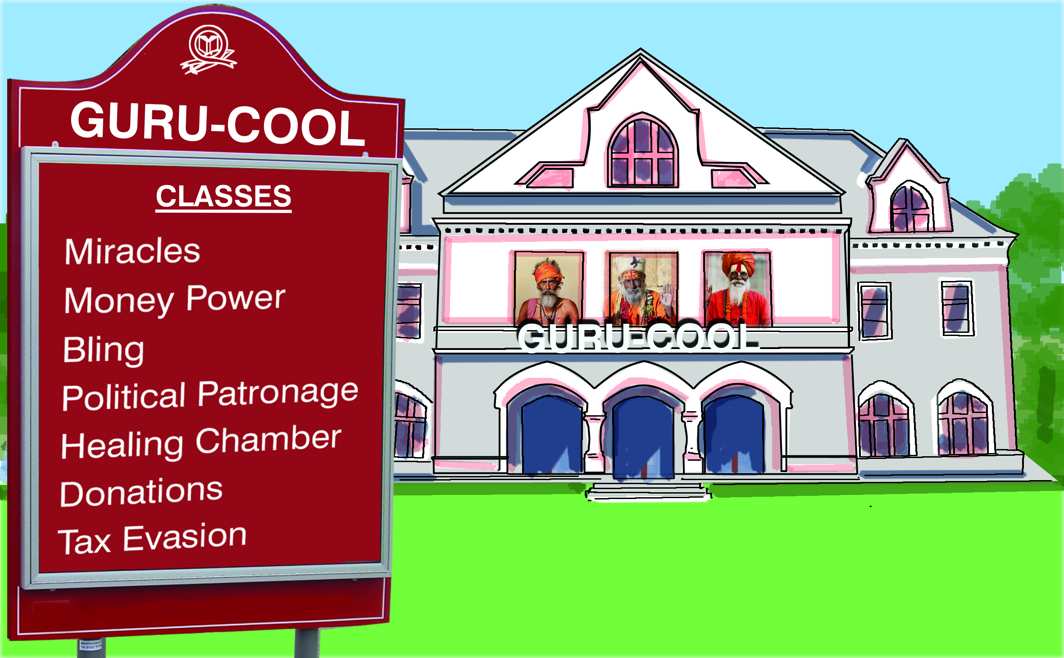 The traditional Gurukul is seen as being past its sell by date. It’s now Guru-Cool that’s in fashion, where religious teachings are more in keeping with modern times and today’s needs and desires. Haryana, being such a progressive state, is where these new Guru-Cools are coming up but it’s not easy to get in. There are strict screening procedures and tough Q&A sessions.

Here’s a sample of the admission norms for the Guru-Cool which produces certified, authentic Godmen.

Questioner: What is your name?

Questioner: No, no, you need to have a modern, secular name to attract maximum followers. I suggest something like Mika Zayan Sonu Steven Singh, has a lovely exotic ring. Talking about rings, why are you looking so drab, in that saffron kurta and chappals? To be a successful Godman you need to look the part. Some flashy diamond rings, gold chains around your neck, crystal embedded outfits, bright red shoes, sequined hats, gold encrusted glares. Guru-Cool, do you get it? By the way, do you have any divine powers?

Applicant: Not yet, that’s why I have come to you. The only divine power I have is that money disappears very fast.

Questioner: You need to work on that. Making money and then making it disappear into a place where the IT department cannot find it is a key attribute. How are your political connections?

Applicant: My brother-in-law once attended an election rally held by Amit Shah…

Questioner: Remember the Three Ps, Politics, Patronage and Patriotism, the Three Cardinal Rules of being a successful Godman. Under politics, nothing less than a Chief Minister, a Central Minister and, if you are really Guru-Cool, the Prime Minister, will do. The bigger your following, the bigger the politician who will want to be seen with you. That’s the patronage part. It brings many benefits—free land, tax rebates, non compliance with GST, if you make movies and star in them, they are tax free, there are many others which we will teach you. Now, to attract the largest following, you need to display some divine powers.

Applicant: How do I do that?

Questioner: The Guru-Cool will teach you how to perform miracles. It’s called the laying of hands. You create a healing chamber, you then invite women inside for rejuvenation therapy where you lay your hands on them and tutor them on various positions. It calms down those who are disturbed. We call it Calm-a-Sutra.

Applicant: Sounds intimidating,… I mean intimate. What if some women object?

Questioner: You adopt them as your daughters. It’s all a fraud of course, but you give them some cool adopted names, like Honeybee or Daddy’s Angel, and they will come around. It’s all part of the religious teachings we impart to impressionable young women to impress them. One crucial lesson we teach here is women’s empowerment, which means you only have female bodyguards, everywhere you go you are surrounded by women, in your private chamber, there are only women, or woman, and you only bond with women. That adds a certain mystique.

Applicant: You mentioned the Three Ps, what has patriotism got to do with religious teaching?

Questioner: Ah hah! That’s the best part. Any modern Godman has to keep up with the times. Or Times Now. Go to Times Now or Republic TV and watch how they use patriotism to attract TRPs. If there is a problem with China, you ask your followers to stop buying Chinese products, eating chowmein or Peking Duck, you honour martyrs who are victims of terrorism, fly the tricolor at every opportunity, sing Vande Mataram. In fact, we have a special course on patriotism by Dr Arnab Goswami.

Applicant: Lots of Godmen have been charged with rape…

Questioner: We have a special course on how to counter that. It is run by Shakshi Maharaj, an expert on such subjects.

Applicant: You mentioned making movies and acting in them. Not everyone can act or produce a film.

Questioner: Not to worry, we have acting classes as well by noted artistes, sometimes we get Anupam Kher, or Pahlaj Nihalani, but the key is finding the right vehicle and the title, something like Love Charger…

Applicant: What about expanding to other countries, are there any you recommend?

Questioner: Start with Germany, no Godman worth his gold fittings will be without a fleet of BMWs and Mercs, you can throw in a few Audis for variety. The main target should be America. Lots of ABCDs, American Born Confused Desis, yearning for some feel of home. Then there are the Americans themselves, the most gullible people in the world—after all they elected Trump—and they love Elvis impersonators which is a Godman with bling.