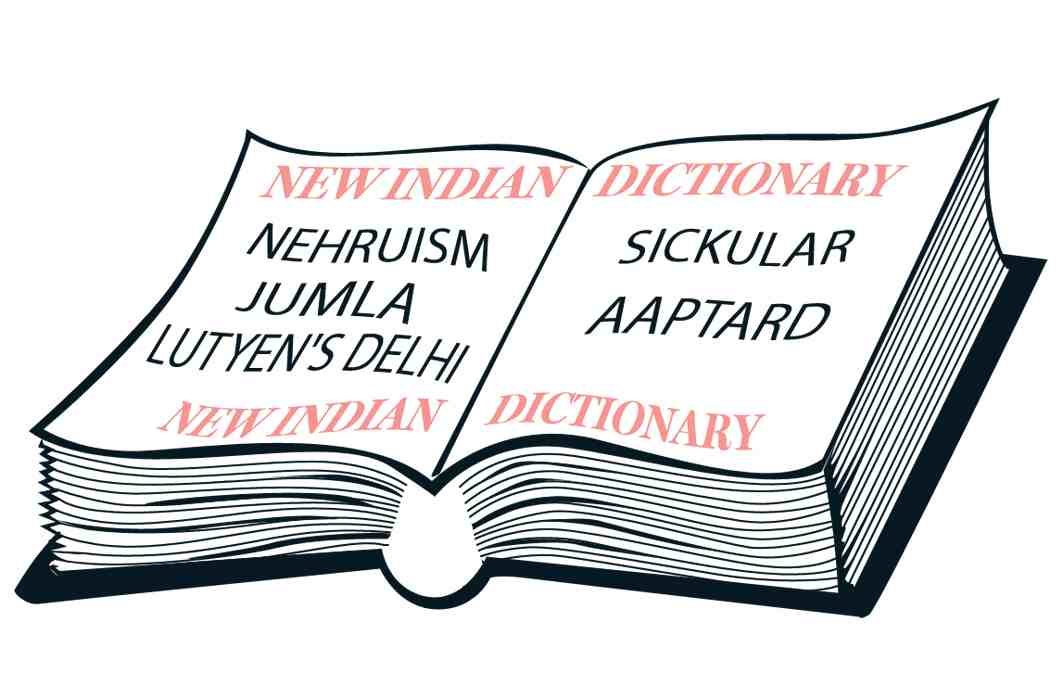 Language, they say, is a living thing, much like the Yamuna and the Ganges. That basically means that dictionaries are going past their sell by date very fast, especially since the NDA government came to power. New words or phrases are being created while others acquire a new meaning or are viewed in a different context. For those into linguistic pursuits, here’s the new, improved dictionary—use it at your peril.

Jhumla: Also spelt as jumla, which is fine since it is a word that has unknown origins and varied meanings. It is political in nature—the Opposition uses it to mean “empty promises” in connection with Narendra Modi. The actual word creator seems to be Modi’s number one fan and his number two, Amit Shah, who used it during the 2015 election campaign, clarifying that jumla meant a thought behind a statement. In other words, don’t take a statement too seriously (as in the Rs 15 lakh in every bank account). Jumla is firmly inscribed in the political lexicon with Sitaram Yechury terming the Modi government’s economic policies as “jumlanomics”. Here’s the last word on the word: the acceptable meaning of jumla is election rhetoric, which translates into hot air.

Cow: The sleepy, plodding bovine has been transformed into an icon of motherhood, national pride, vigilance and assertion of superiority, and now, the word cow has been banned from movies, along with Gujarat, which is a state and difficult to ban but the ever-alert Censor Board has just done so in reference to a documentary on Nobel Laureate Amartya Sen. In other words, cows do not exist even though they can cause communal riots, and neither does Gujarat, presumably for the same reason. Amitabh Bachchan can plug Gujarat all he wants in the tourism ads but for Sen, it’s a sin. Go figure.

Nehruism: The rewriting of history under the present regime has meant some alterations. Originally, it stood for a political ideology that was a liberal, idealistic type of Fabian socialism with secularism at its core. Now, according to those who are right, it stands for betrayal and is the root cause of the problems in Kashmir and China’s aggression. The new, revised Nehruism has been passed down the family tree—they are being accused of “pseudo-secularism”, another word that has gained currency under NDA rule.

Lutyens’ Delhi: Used to refer to that elegant, beautiful part of the capital, equivalent of the city centre, and redolent of Imperial glory and the trappings of power and privilege. The cleanest part of the city, officially known as Lutyens’ Delhi, is now a dirty word thanks to one man—Arnab Goswami. On his nightly show, the loud-mouthed anchor constantly bad mouths those from Lutyens’ Delhi, referring to liberals, socialites and journalists who don’t agree with his views. It has become such a catch-all phrase that you could be branded as being from Lutyens’ Delhi even if you live in Mumbai or Bangalore. Variations on the theme include “Lutyens’ Gang”, “Lutyens’ Media” or “Lutyens’ Ecosystem”. Poor Edwin Lutyens must be shivering in his grave, waiting for someone from Republic to shove a microphone into his coffin and say: “The nation wants to know.’’

Presstitute: A word coined by a member of Modi’s cabinet, minister of state VK Singh, which basically seeks to suggest that those who represent the press are the equivalent of prostitutes. Singh’s disdain for the media stems from newspaper stories that were unkind to him when he was army chief, but it has now become a convenient means to devalue the media whenever they write anything negative about politicians or the government. The word suggests that journalists, like prostitutes, are embedded.

Sickular: A distortion of secular and as much of an insult as “pseudo secular”, it suggests that anyone who takes the side of minority communities or non-Hindus is mentally sick and hypocritical. Forget what the constitution says, who needs that stuff anyway!

Libtard: Another word that takes a swipe at someone with liberal ideas, with “tard” being a suffix that equates with “Retard”. Pretty sick.

AAPTard: A variation on Libtard but aimed at those associated with Arvind Kejriwal and his Aam Aadmi Party suggesting that they are cloud cuckoo land, with AK being the cuckoo in question.

Aiyo!: That loveable, expressive word which is South Indian in origin and covers a range of emotions, from delight to shock and dismay. Recently included in the Oxford Dictionary, it is the equivalent of the South Indian head shake, up and down, or sideways, which can mean yes and no or maybe, and also must be what Amartya Sen said when he was told the word “cow” and “Gujarat” had been censored from his conversation.