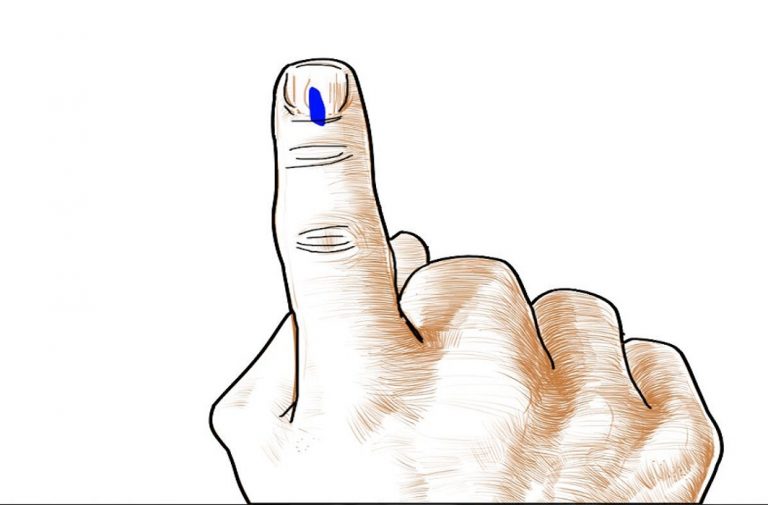 The world’s biggest electoral exercise kicked off last week revealing the giant circus it actually is—from lion tamers to trapeze artists switching sides mid air, to the clowns and jugglers, and this is just the first phase. What was not so visible is the voter’s choice—every voter came out showing us the finger which is indicative that they face something of a dilemma in the existing circumstances. From Ground Zero, a conversation among voters who will cast their ballots in the next phase, tells the story.

Impending Voter 1: The signs are very clear as far as I am concerned. I am a farmer and I have lost so much money in the last four years, dug myself deeper into debt and have been forced to sell the family silver. The gap between what it cost me to produce my crop and the market price was a killer. No wonder so many farmers committed suicide in the recent past. In my view, you reap what you sow and I will vote according to my conscience.

Impending Voter 2: I am facing a similar situation. I am a shopkeeper who has lost all his hard earned money first through demonetisation—all my dealings were in cash—and then that GST business got me so confused with all the chopping and changing, it almost wiped me out. I too will vote according to my conscience.

Impending Voter 3: I am a housewife from a lower middle class family and I have seen all our savings disappear thanks to the rise in food prices. Economists use fancy words like inflation and GDP but I pay the grocery bills and know which side the bread is buttered, except I can’t afford to buy butter anymore. My choice of who to vote for, or against, is a no-brainer.

Impending Voter 4: I have a brain—in fact I am a double PHD and a topper from India’s leading IIT—but I get a brain freeze when I hear this government’s ministers constantly boasting about India being the fastest growing economy in the world. All I know is that I have been unable to get a job for the last three years which I have spent standing in long queues at the employment exchange. I will be voting with my feet.

Impending Voter 5: I will be a first time voter and each time I speak to my contemporaries from college, we feel electorally challenged. What is the future for the youth in this country? Unemployment is on the rise, jobless growth is the new India story, investors are wary and if Jet Airways can crashland so fast, I really see no light at the end of the tunnel. The only light will be when I press that button on the EVM.

Impending Voter 6: I am from Uttar Pradesh and I made my living buying and selling cattle and milk. Now, my life is a living hell, thanks to that Yogi, I have cows that have stopped giving milk and I can’t sell them thanks to all those ordinances and rules. I am a Hindu and believe in the sacred cow but it has put me on the horns of a dilemma. There is also something called the milk of human kindness which seems to have vanished from the market. I am very clear about my vote and which party it will go to.

Impending Voter 2: As a fellow Hindu, I sympathise with your dilemma but I am also very clear about my vote, as I think we all are. In times of crisis, the nation needs a strong leader.

Impending Voter 4: I agree, only a strong decisive leader can bring back jobs, eliminate unemployment, give the farmer his due and crack down on consumer prices.

Impending Voter 5: Strong leaders who take decisive action against our enemies will earn my vote.

Impending Voter 6: What has brought about this change? A minute ago, you were all bemoaning the current situation!