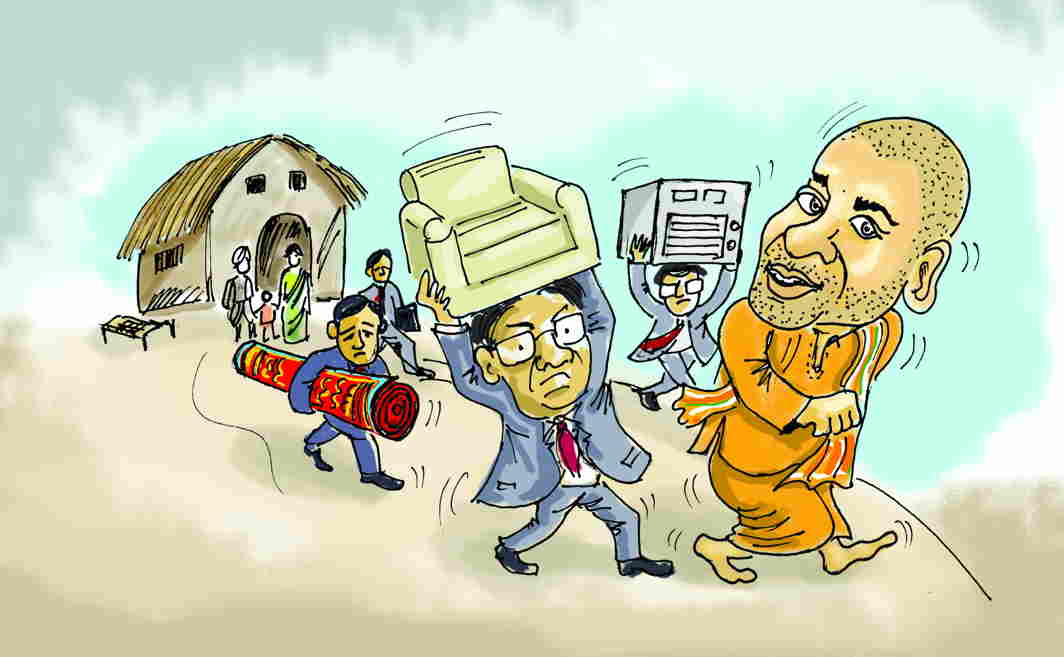 All those posters and films on Incredible India are not so far off the mark. It is truly incredible just how innovative and creative Indians can be when the need arises. Some call it jugaad but a change in government seems to have worked wonders for, ..well, the wonders of India. Here, in no particular order, are the modern Wonders of India.

Portable Office: Chief Minister Yogi Adityanath showed us why Uttar Pradesh leads the way in ingenuity. When he moves, his office moves with him, complete with all mod cons. He proved that he is only human when he visited the family of a CRPF jawan who was killed by Maoists. Tokenism is an acceptable part of political life but this being a hot summer’s day, local officials came up with an ingenious solution—transporting the CM’s office to the cramped quarters where the jawan’s family lives, so he could feel at home. Half an hour before the CM’s arrival, his entourage showed up carting a sofa, a carpet, bottled water and, wonder of wonders, an air conditioner! If the martyr’s family thought a Yogi had come bearing some cool gifts for the ultimate sacrifice made, they were in for a nasty surprise. Five minutes after he left, his portable office was dismantled and vanished into the dust of his departure. Other CMs have since expressed interest in replicating this Wonder of India.

Missile Defence System: Military experts say that Israel has developed the best anti-missile systems. India has gone a step, or two, further. It has produced a highly effective, low cost anti-missile system and tested it successfully in battlefield conditions. It was designed by a humble army major in Kashmir who hit upon the brilliant strategy of tying a civilian to the front of his jeep so he could drive himself and his men to safety and prevent adversaries from targeting them with missiles, namely handy bricks and stones. As a military innovation, it ranks along with the Trojan Horse designed by the Greeks to invade Troy. The award he was given is intended to encourage other such Make-in-India inventions. This one is being called the Easy Rider.

The Sealed Suite: Another wonder that is uniquely Indian. It has gone down in history as the hotel room that has been closed to guests for the longest possible time, since January 2014. Suite number 345 at the Hotel Leela Palace in Delhi’s Chanakyapuri, where Sunanda Pushkar was found dead, was sealed by the Delhi police. Over three years later, any possible evidence of foul play or forensic clues would have long gone, but the police are yet to allow de-sealing of the suite, leaving the hotel management clueless. No one from the Delhi police has checked in, or checked out, the suite for the past 15 months. Is it because it is a hotel chain that they believe there is a chain of evidence? No other police force in the world can preserve clues and evidence for so long in a room that most be, by now, covered in dust and cobwebs since housekeeping has been barred. Thanks to Arnab Goswami, another ace investigator, and his accusations masquerading as proof, Delhi police is still trying to crack the Case of the Sealed Suite—without entering it.

Eating Disorders: The wonders of vote bank politics will overcome all odds in India, and still leave us hungry for more. Two political chieftains who are poles apart politically (one is a Congress chief minister from the south and the other is the BJP president), recently visited Dalit homes to share a meal, and a photo-op. Both sides are wooing the community and one way to win votes is to show that they will eat food from a Dalit home. Unfortunately, the wonderful things about wonders is it leaves people wondering; and in both cases, it turned out that the food was not cooked by Dalits in their home but ordered from a restaurant! Dalits being lynched is a tragic story of our times, but being lunched?

Water of Life: We all know about streams of consciousness but rivers of knowledge? The source is VHP general secretary Swami Vigyananand who recently unveiled a hidden wonder of India. Speaking at a World Hindu Summit, he reached new peaks when he declared that “the word ‘industry’ came from us—Indus’’. When the British came to India, he said, they found the country so industrialised that they coined the word industry after the river Indus. The fact that the British also started the industrial revolution was conveniently ignored in favour of the old dictum—never let facts stand in the way of a wonder-full story.