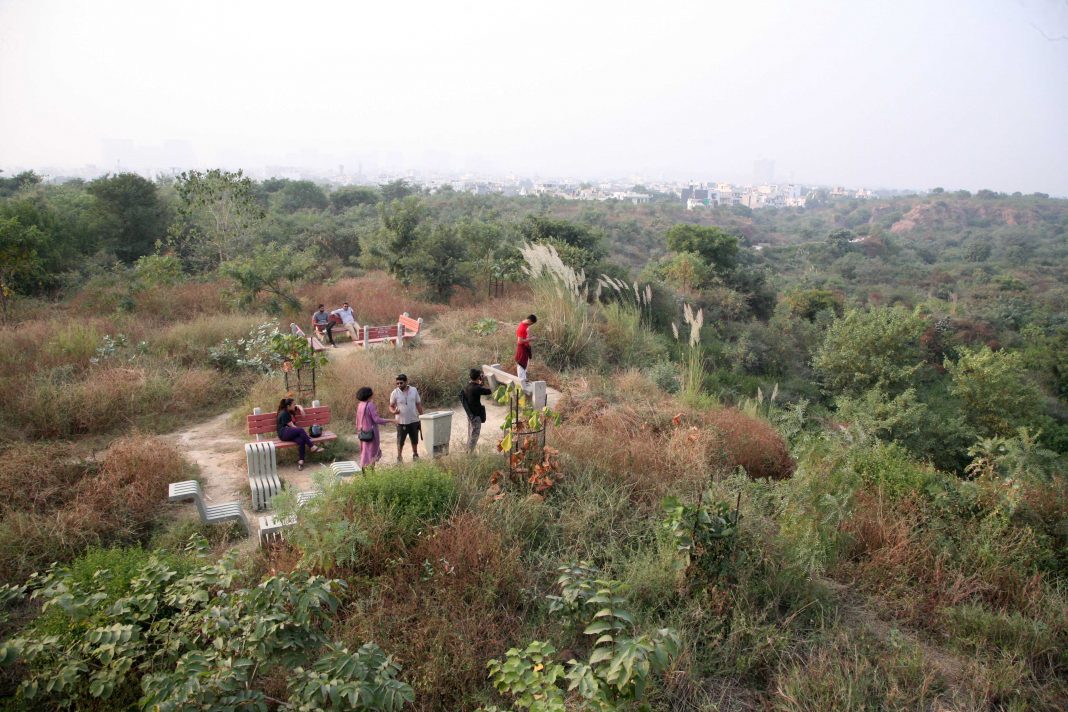 Above: A view of the 154-hectare Aravali Biodiversity Park, the green lung of the NCR/Photo: Anil Shakya

With the NHAI planning an expressway through the verdant and unique Park, it is in danger of being exploited by rapacious builders. But a PIL in the Supreme Court could stymie these plans

Yellow Vajradanti lilies dot the walkway to the car park and amphitheatre as bright black and orange butterflies flicker past, flitting between shrubs in the lambent sunshine. A long-distance runner toils alone in quest of his fifth mile. A group of amateur photographers hunts for a vantage point, comely in their youth and chattering, as a family of peacocks roosts in the ravine.

All are blissfully unaware of the sword of uncertainty that hangs over the National Capital Region’s (NCR) only hand-planted forest, spread over 153.7 hectares of restored Aravali terrain. It is home to over 300 species of native plants, 90 kinds of butterflies, 180 types of rare birds and wildlife such as nilgai, golden jackals, hares and civets. In short, it is a nature lover’s paradise.

However, this slice of heaven is in danger. The National Highway Authority of India (NHAI) has submitted a proposal for the first phase of the 40-km Gurugram-Manesar Expressway or the Greater Southern Peripheral Road. It consists of a six-lane Link A road (from Ambience Mall to MG Road), 1.5 km of which will traverse the Aravali Biodiversity Park (ABDP). In the pipeline is also a longer, six-lane, Link B road (from Vasant Kunj to MG Road) that will pass via the South Delhi Ridge reserve forest area of Rangpuri, Sultanpur, Ghitorni and Rajokri villages to meet Link A at one corner of the Park. A Link C road, to be built in the next phase, will carry traffic from this intersection on to National Highway-8. The roads will strike the death knell for this young forest, only eight years old. Since its inception in 2010, it has recharged the capital’s falling water table and is the green lung for much of south Delhi and Gurugram.

Growing out of what was once a stone quarry, the forest is a labour of love of thousands of children and citizens of Gurugram, whose efforts were led by Latika Thukral, an ex-banker; Swanzal Kak Kapoor, an architect, and Ambika Agarwal, all co-founders of iamgurgaon, an NGO. Ecological gardener Vijay Dhasmana is consultant to the 380-acre reforestation project. The project to plant numerous trees in this quarry was funded by 58 businesses. With so much at stake, advocate Sumit Mehta and his team are now planning a legal offensive to protect the Park and the Ridge. He will file a writ petition challenging the validity of the Master Plan of Gurugram 2031 which, he says, is based on flawed data. He will also file a PIL in the Supreme Court, focussing on the consequent pollution and costs to environment and health and will propose alternative traffic routes.

Located as it is on what is defined as gair mumkin pahar (uncultivable hill), gair mumkin rada (hill pastures), gair mumkin behed (ravine foothills) and banjar beed (cultivable grassland) in land documents, the Park should have been classified as Aravalis, according to the ministry of environment, forests and climate change’s 1992 Aravali Notification. It prohibits tree felling and any construction activity thereupon. However, as it is not shown as forest but revenue land in the records of the Municipal Corporation of Gurugram which owns the lion’s share of it, and is also not covered by the Punjab Land Preservation Act (PLPA), 1900, it remains without these two legal protections. Hills on the opposite side of the main road, though, are covered by the PLPA.

As environmental analyst Chetan Agarwal informs, in its initial forest identification exercise in 1997, Haryana only included the Aravali Plantation and areas notified under PLPA’s Sections 4 and 5. It did not in­clude areas recorded as forest in revenue books. Nor did it include areas not recorded or notified as forest even though they fulfilled the dictionary meaning of forest as propounded by the Supreme Court in TN Godavarman Thirumalpad vs Union of India & Ors, 1996. It has now delayed this identification process by over 20 years. All this has given the real estate lobby a free hand in the region, leading to commercialisation and unplanned development as in Mangar Bani and on Surajpur-Badkhal Road, and destruction of the hills.

Agarwal calls for a “deemed forest” status for the park. This way, the Forest (Conservation) Act, 1980, can be invoked to rescue the forest. Deemed forest status is accorded by the state government to all those forests which are neither defined as reserved or protected forests, nor notified as jungle or bani in the revenue records, but otherwise fulfil the dictionary criteria requ­ired of a forest. Paragraph 122 of the 2011 Lafarge judgment sets out the guideline for doing this. All that is required is a site inspection by a state forest department team along with a ministry of environment, forest and climate change representative.

At present, there exists about 28 acres of private land in ABDP. Of these, 10 acres belong to the KP Singh-owned DLF Limited, sparking fears that once the tender is floated by NHAI after clearance of the detailed project report, it may be this company that ultimately bags the contract for building the expressway.

Rajveer Singh, a senior official in the Gurugram Metropolitan Development Authority (GMDA), which has given in-principle approval to NHAI’s Phase I proposal of the expressway, claims the roads will solve the connectivity problem for those travelling between Delhi and Manesar, especially businessmen. “There is a rush of traffic on NH-8, with the number of cars burgeoning daily. This leads to jams, and we need more road capacity. However, whether the gain to infrastructure derived from the expressway is more or less than the loss to the environment and biodiversity, which will inevitably happen as a result of it, is something that must be analysed,” Singh told India Legal. Pertinently, as Agarwal points out, no environmental impact and strategic environmental assessments take place when master plans are prepared for cities.

As per guidelines of the ministry of urban development, there has to be 20 percent green cover in every city. The Aravali Biodiversity Park contributes to over five percent of the green cover of the NCR and 11 percent of Gurugram’s.

In May 2018, the National Green Tribunal had asked GMDA to scrap plans to build a 12-km stretch of the expressway through the Aravalis and stick to the original proposal in the Gurugram Master Plan 2031. But there are a lot of loopholes in this plan. A cursory glance would show, for instance, that the link road alignments proposed in it and in the Delhi-NCR J-Zone Master Plan 2021 do not match. Alarmingly, one broader issue is that the Delhi Decongestion Plan has several roads cutting through the Aravalis.

The Town and Country Planning Department of the Haryana government approved the Gurugram Master Plan 2031 in December 2012. Whenever the government intends to spend public money, it has to conduct a survey. The last official survey of the Government of India was conducted in 2011 when the population of Gurugram was about 15 lakh. Since then, there has been a huge population explosion there. Today, it ranges between 45 lakh-55 lakh.

And though Singh and the industrialists insist that the expressway would reduce traffic pressure, post the closing of the toll plaza and building of new underpasses at Rajiv Chowk, Hero Honda Chowk, Signature Tower, Medanta, IFFCO Chowk and Shankar Chowk, as well as the creation of diversions, much of the traffic on NH-8 is already streamlined, say locals. There are no longer bottlenecks between Manesar and Delhi, they claim.

Instead of building Link B, enhancement of an existing 50-m-wide road and MG Road in Delhi can provide an alternative and much shorter route to Manesar, and save both fuel and time. The 16-lane Golf Course Road, at 150 m, is already bigger than the 80 m which was planned earlier, and the vision of Link A has already been derived and achieved by it. Even if the expressway is built in the vicinity of a forest, it has been seen that traffic pressure and the resultant noise drives away native fauna and migratory birds. The Sultanpur bird sanctuary, for instance, lost much of its bird population when the state highway passing close to it was upgraded four-five years back.

“No holistic view has been taken of the project, factoring in environmental losses and effects on air pollution and groundwater, even when there exist  multiple alternative public transport strategies,” says Agarwal. “For instance, the master plan includes a rapid rail transit system, starting at Sarai Kale Khan, passing through Gurugram, and going into Alwar. Its alignment is mostly along NH-8 and the proposal is in the final stages. Once it is in place, it will take off at least a third of the traffic on NH-8.”

Thukral adds: “When we set about building this park, we realised that our city did not have a space for people to interact. Our journey has taught us how communities get formed. Earlier, Gurugram had no activity, no avenue for people to explore an alternate existence outside corporate life. Now we get to interact with the Nathupur villagers, for instance, who invite us to their family functions. The Park has integrated people from all walks of life and has become not only a landmark but also an identity for an otherwise-dreary, breathless city. If the expressway is built, the loss will be irreparable. A paradise lost was regained in the shape of this Park. Will nature give us one more chance?”