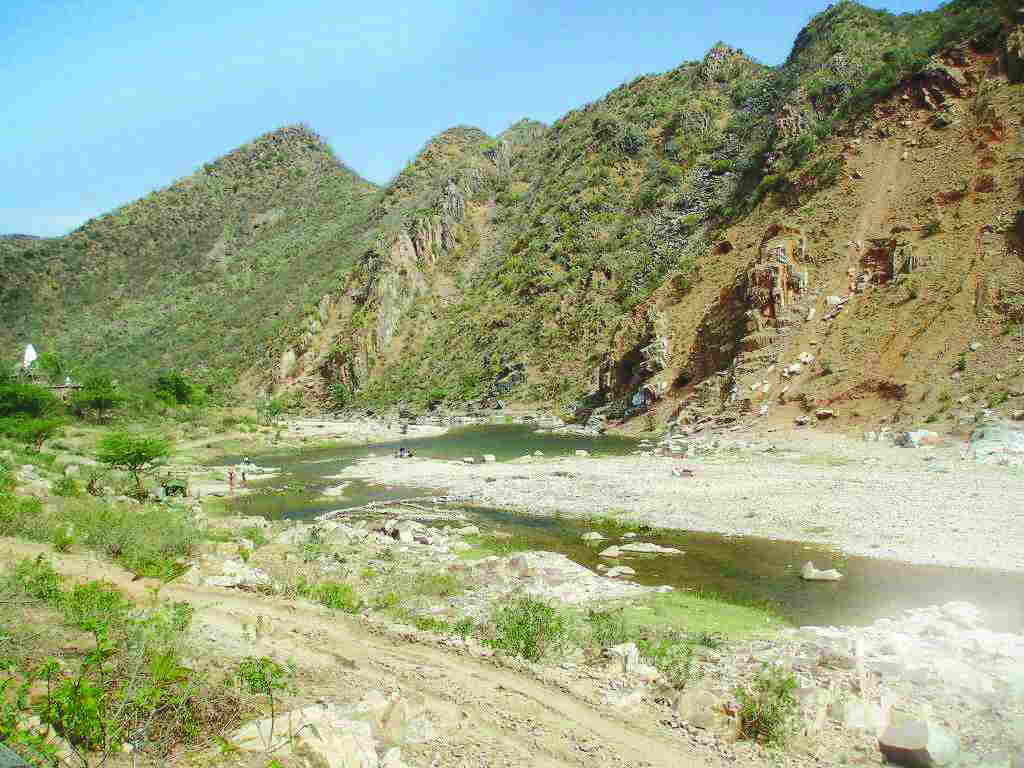 Above: The Aravallis are constantly facing onslaught from builders and the mining mafia. Photo: indiamike.com

Government officials are trying to deforest over 52 acres in this ecological sensitive area for Bharti Realty Pvt Ltd. If the project is cleared, nearly 50,000 acres will be with realtors

A petition filed by an environmental activist has blown the lid of what seems like a huge scandal worth hundreds of crores which could alter the ecological landscape of the National capital region. The issue of clearance for a mega-buck real estate deal in the Aravallis is currently with the National Green Tribunal (NGT). The players are equally big-time—Bharti Telecom and the government of Haryana. If the approval is given by the NGT, over 52 acres of land in the highly ecologically sensitive area of Aravallis and situated within the Natural Conservation Zone (NCZ), could soon become prime real estate, promoted by Bharti Realty Pvt Ltd. The plan is to build 2,000 luxury apartments and accompanying urban facilities. As for environmental concerns, no one seems too bothered, except the petitioner.

Scarier than the thought of a devastated eco zone is the impunity with which senior government officials have been running roughshod over laws that bar construction in those areas.

That this is patently illegal has been hinted at in some missives by other officials. Some letters are in the possession of India Legal. Of the 8,000 trees in the area, probably just 1,000 survive and there is a move to term them as harmful mesquite shrubs (see box) that should be cut down. And if this project is cleared, it will set a legal precedent as nearly 50,000 acres of such land will be immediately handed over to real estate developers.

The fact is that the land of the Aravallis is locally termed as gair mumkin pahar (infertile hills), the very concept that brought the National Green Tribunal into being. One of the objectives was to stop desertification of land. In this, the Aravalli range has played a vital role. The range also replenishes ground water for large tracts of land. Construction in NCZs is restricted to 0.5 percent and residential construction is banned.

To get to the bottom of the blatant lie that is being perpetrated by certain top officials in collusion with billionaire Sunil Bharti Mittal’s real estate venture, one has to go back to a special meeting of the NCR Planning Board, held on December 20 last year. In the meeting’s minutes on the Aravallis, it is stated: “Additional Chief Secretary (ACS), Town & Country Planning Department (TCPD), Govt. of Haryana referred to the Zoning Regulations stipulated in the Regional Plan-2021 notified in 2005 and highlighted that the uses/activities permitted in Natural Conservation Zone (NCZ) are (i) Agriculture and horticulture, (ii) Pisciculture; (iii) Social forestry/ plantations including afforestation and (iv) Regional recreational activities with no construction exceeding 0.5% of the area with the permission of the competent authority.” 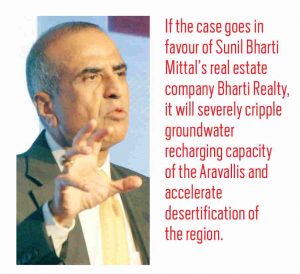 It further says that “Zoning Regulations of the RP-2021 have imposed additional restrictions which are not part of the existing Acts/Rules & Regulations/ Notifications issued by the Central Govt.”

There is, however, a section which says: The “Govt. of Haryana, stated that so far as issue of definition and delineation of NCZ is concerned, the matter is resolved. However, as concluded during the meetings, the areas under NCZ are to be governed inter alia by various Statutes/Rules/Notifications of concerned Central Govt. Ministries/Departments. Hence in such areas the Zoning Regulations of RP-2021 (such as restricting only 0.5% of construction, that also for recreation activities), should not be made applicable, since this is an additional restriction. In order to avoid any ambiguity, a clear decision needs to be arrived at.

“After detailed discussions, it was decided that Govt. of Haryana may make a clear reference on the matter and that will be considered separately.”

Hence this section has remained ambiguous and till such areas are clearly defined, they cannot be considered as out of the NCZ.

On June 22 this year, the additional chief secretary of Haryana wrote to the principal chief conservator of forests of Haryana and his letter clearly gives the green signal for construction work. His argument was as follows:

“It is amply clear from the letter of Dy Conservator Of Forest No 3945 Dt 10/1/2014 that the concerned area of Village Sarai Khwaja belonging to the Bharti Reality Ltd (earlier Ajay Enter-prises) is not covered under section 4 or 5 of PLPA Act and lies in the general order of 28/11/1997 under section 4 of PLPA. It also clearly states that the area is NOT being treated as Forest’ and FCA is not applicable on this land. Further-more the letter states that NO PLANTATION UNDER ARAVALI PROJECT has been undertaken by the Forest Deptt on the above said land.”

The government officer appended a Supreme Court order of 2013 in a case of BS Sandhu in justifying his case. That order has put doubts over the forest cover argument in certain areas. It says: “…by recording a blanket finding that all land in village Karoran, District Ropar, was ‘forest land’ for the purpose of Section 2 of the Forest (Conservation) Act, 1980, the High Court has affected the legal rights of several villagers, agriculturists, farmers, shop owners, inhabitants of village Karoran, District Ropar, who were carrying on their respective occupations on their land even before the enactment of the said Act on 25.10.1980. In our view, the High Court should have been very careful before recording findings which affect the property rights of persons protected by Article 300A of the Constitution.”

Not considering the fact that this judgment wasn’t centred in and around the contentious Sarai Khwaja Village, and hence was possibly not applicable, it was the handle that the government used to push its case.

The letter also states: “…this case fares even better because it was never closed under section 4/5 of PLPA Act 1900 by any special order. Still, as a matter of abandon caution, I have got the Survey of India map of 1976 of this area. On that map the area in question has been superimposed digitally and it shows only 2 trees on the said land. Furthermore The Survey of India letter No T-147/44-M-9 Dt 12/6/2017 flag states very clearly that they shows ALL WOODED AREA (FORESTS) whether dense or open by a green wash on their topographical maps. By that standard also the area is not a Forest because there is no green-wash area marked on that plot till 1980.”

The salesmanship of the government is clear in this letter. The letter also goes on to state the promise by the Mittal firm of planting a number of trees.

With the groundwork done by the government, the Dy Conservator Of Forest, Faridabad, got into action and the very next day, sent a letter to Bharti Land Ltd (a copy of which is with India Legal) saying that permission was accorded for the felling of mesquite shrubs. One has to remember that it had been, by then, painfully proven by the government and the forest department that there were few trees and mostly shrubs.

While such activities were on, green activist Lt Col (Retd) Sarvadaman Singh Oberoi filed a petition with the NGT against all this. The Principal Chief Conservator of Forests, Haryana rushed a letter (Dt: June 24, 2017) to the state’s additional chief secretary, warning the top government official that legal proceedings were on.

The letter states: “It may be seen that the 0A (Ed: by Lt Col Oberoi) pertains to land parcel belonging to Bharati Realty Private Ltd falling in village Sarai Khwaja, District Faridabad. Therein, Govt of Haryana decision vide ACS Forests letter number 5156-Ft-1/2016 /53 dated 24/4/2017 & Memo No. 5156-Ft -1 -2016 /5733 dated 1/5/2017 have been impugned. The Chief Secretary, Haryana, PCCF, Haryana and Divisional Forest Officer, Faridabad are respondents from Government of Haryana. Also, through a Miscellaneous Application No. 779 of 2017, the stay on the operation of the impugned letters has been pleaded. The matter is listed for hearing on 03/07/2017.” The last sentence is in bold for emphasis in the original.

Thereafter, an interesting paragraph follows. It says: “The Additional Advocate General has advised to file reply on part of State of Haryana and its respondent departments/authorities well before 3/7/2017. In this regard, it is suggested that the reply should be filed by the Government because the decision into the matter has been taken at the level of Government and the department does not have full facts or grounds based on which the decisions were taken.” This is a most diplomatic way of passing the buck, it seems.

A source, on condition of anonymity, told India Legal: “It has to be remembered that while the NGT was considering sending an expert committee to inspect the area, the government had already given permission for the felling of the trees. The letter according permission was given on June 23, a Friday. Saturday was a holiday, followed by Sunday. Most interestingly, Monday was Eid, another holiday. Hence the felling of trees could continue without any court interfering.”

The case for the real estate project seems to have been presented with care and in quick time. A lot of background work has been done by those concerned and the source claimed that “there is no way any government department would work with so much alacrity if there was no pressure from the very top”. He said it was anybody’s guess what “the very top” meant.

There are protests afoot, an online application brewing, but the way the government has approached this case, it seems it is desperate to give the realtor the last say. This overrules scientific theories that the Aravallis are not only a buffer for Delhi (against desertification), but also present the most important ground water recharging environment in a mostly arid area.

“If one can look into the land-holding pattern of the Aravallis (though it is a NCZ area, private land ownership is allowed), it will be clear how much vested interest lives in these hills,” said the source. “The course of this case will decide the future of over 50,000 acres that can be immediately opened up for real estate, dealing a blow to our environmental concerns.”