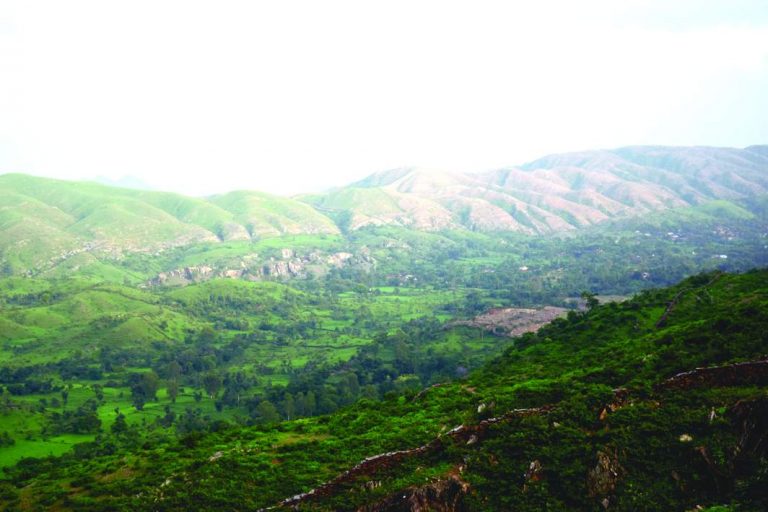 Above: The Aravallis serve as aquifers and host biodiversity too. Photo: Kh Manglembi Devi

The centre has told the NGT that the definition of these mountains can be broadened to cover more areas so that they can be protected better. But unless laws are implemented, the degradation will continue

The Aravalli mountain ranges are among the oldest in the world and are waiting to be saved. Today, they are among the most degraded forests in India. Many species of animals, plants, trees and birds have vanished. Down the years, large tracts of its forests have been ravaged by real estate activity and rampant mining, which was often illegal. This has disturbed the fragile ecology, with some lakes drying up.

It wasn’t always like this. Many decades ago, these ranges were punctuated with verdant forests. They also acted as an effective shield against desertification and were one of the richest biodiversity areas of India. Wildlife thrived there and there is documented evidence of leopards, striped hyenas, golden jackals, nilgais, palm civets, wild pigs, rhesus macaque, pea fowls and Indian crested porcupines thriving there. Rivers such as the Banas, Luni, Sahibi, Sakhi, and Sabarmati flowed through it.

These ranges stretch for nearly 690 km across Gujarat, Rajasthan, Haryana and Punjab. They date back to millions of years when a pre-Indian sub-continent collided with the mainland Eurasian Plate. Over the years, these high ranges got weathered down. Carbon dating has shown that copper and other metals in the ranges date back to at least 5th century BC.

So, can the lost glory of the Aravallis be revived? It can, or at least an attempt is being made to. The Ministry of Environment and Forests has told the National Green Tribunal that the definition of the Aravallis can now be broadened to cover more areas so that it can be protected better. It includes areas which are uncultivable, degraded and denuded and which were kept out earlier. (See Box)

It is likely that nature may regenerate there in some form or the other if left alone. The new definition brings large swathes of the mountain ranges in Gurugram and Faridabad under an official cover. No more can the Haryana government use the earlier excuse that the area under dispute was not designated as protected.

Hitherto, the lack of clarity had allowed real estate companies to go merrily about their business, caring little about environmental laws or areas that were fragile. Hopefully, the new definition will help activists and environmentalists fight the government in legal cases.

If restored to their former glory, the Aravallis can act as a barrier against the advancing Thar Desert. Manu Bhatnagar, principle director, Natural Heritage Division, told India Legal: “With the new judgment, there should be no ambiguity now. The Aravallis have to be saved because it is a water-recharging zone as it has fractured rocks. Its forests can attract rain and end the water scarcity in those areas. It can cool the atmosphere. We have to preserve the Aravallis in its pristine form.”

An affidavit submitted to the NGT by the Environment Ministry removes ambiguity around another major area of environmental concern: natural conservation zones (NCZ). It says that the NCZs include forests, Aravallis and groundwater recharging areas. Many of the rocky mines have turned into lakes in the National Capital Region as deep digging has punctured the aquifer. Miners will no more be able to exploit these.

The affidavit clearly says that Haryana will have to define forest areas in accordance with a Supreme Court judgment dating back to 1996 and July 2011 in the TN Godavarman case which said that all forests would be protected by the Forest Conservation Act, irrespective of whether they are degraded, denuded or cleared. This means that forests that are normally not seen as forests will also be considered as such. It will, therefore, not be possible for realtors to use that as an excuse to build on it. Essentially, it would mean that the whole of the Aravalli ranges would now be seen as forests and will have to be protected.

What is a Forest?

Apart from reserved forests or places already classified as such in government records, a new definition of what constitutes the Aravallis for protection purposes will now include:

Till now, the ambiguous idea of what constitutes the Aravallis led the area to be ravaged. For real estate and mining magnates who wanted to exploit the natural habitat, there were plenty of loopholes. Hopefully, the new definition will make it more difficult for them.

In another affidavit, the NCR Planning Board told the NGT that the Haryana government has to ascertain the status of NCZs. This is also significant as in the past, Haryana had diluted the definition of NCZs and tried to redraw the areas under the natural conservation zones. Sources said that because of the pressure of the exploding real estate industry and the powerful mining lobby, government officials often diluted norms to accommodate them. Bhatnagar said: “As the land value in Faridabad and Gurugram was exploding, the land mafia and the real estate companies were desperate to capture it. They were helped by the political establishment and bureaucracy.” 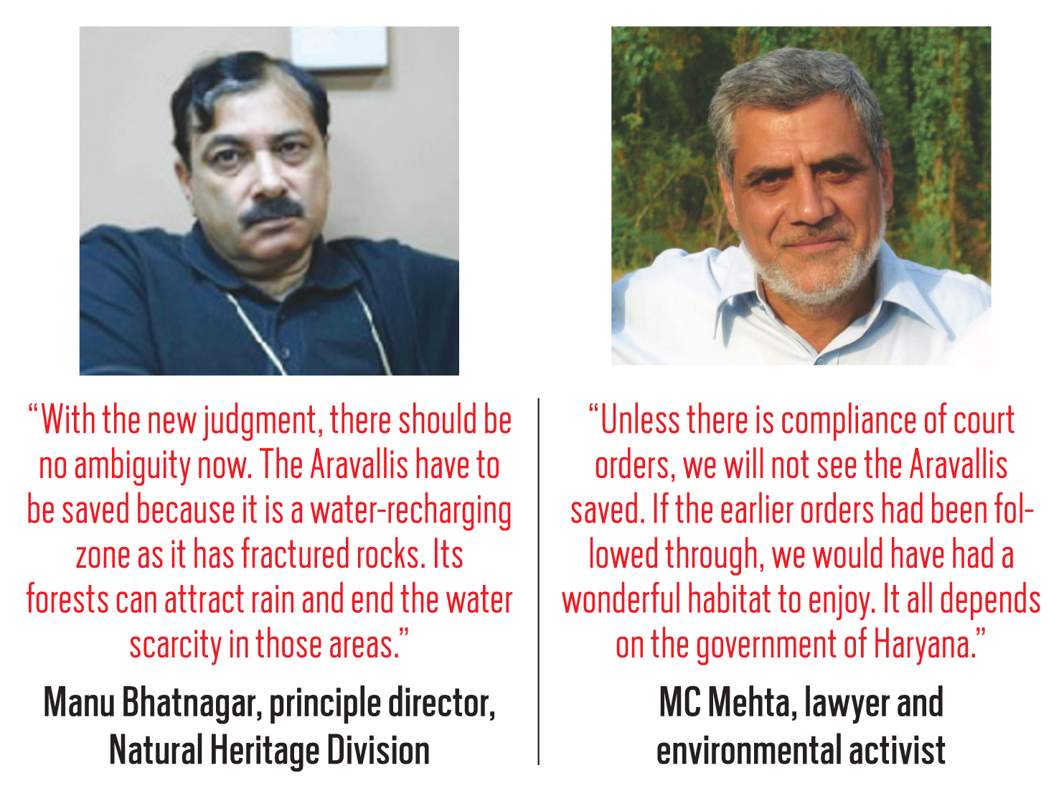 Interestingly, in 2004, the Supreme Court banned mining in the notified areas of the Aravallis. In May 2009, it extended the ban on mining to an area of 448 km stretching across Faridabad, Gurugram and Mewat districts of Haryana. But mining went on stealthily with the government and police looking the other way. This is why there are lakes in areas where there were none earlier.

Lawyer and environmental activist MC Mehta, who was a party to numerous cases dealing with the Aravallis, told India Legal: “Despite court orders, violations continued as the Haryana government was not keen on cracking down and enforcing the orders. In fact, the Supreme Court had in the mid-Nineties directed that a wall be erected around 7,777 hectares of the Aravalli ranges to stop encroachment. The wall did come up, but today, we can see how the wall has been damaged in certain areas to allow land grab. Even hazardous wastes have been dumped in the forest areas.”

The Aravallis were a gold mine for miners as they were rich in minerals. For many decades, sand, silica, quartz, marble and other stones were extracted from here. No wonder, the forest cover in Haryana is around 3 to 4 percent, one of the lowest in India.

Despite numerous PILs filed by environmentalists, mining has continued here. One of the most serious concerns was unplanned urbanisation, over-exploitation of natural resources, untreated waste disposal, increasing pollution, lack of forest cover and wildlife habitat.

With the NGT now taking an active interest, there might be hope. But Mehta is cynical: “Unless there is compliance of court orders, we will not see the Aravallis saved. If the earlier orders had been followed through, we would have had a wonderful habitat to enjoy. It all depends on the government of Haryana.”

Unless there is political will in Haryana to protect the Aravallis, nothing will change.