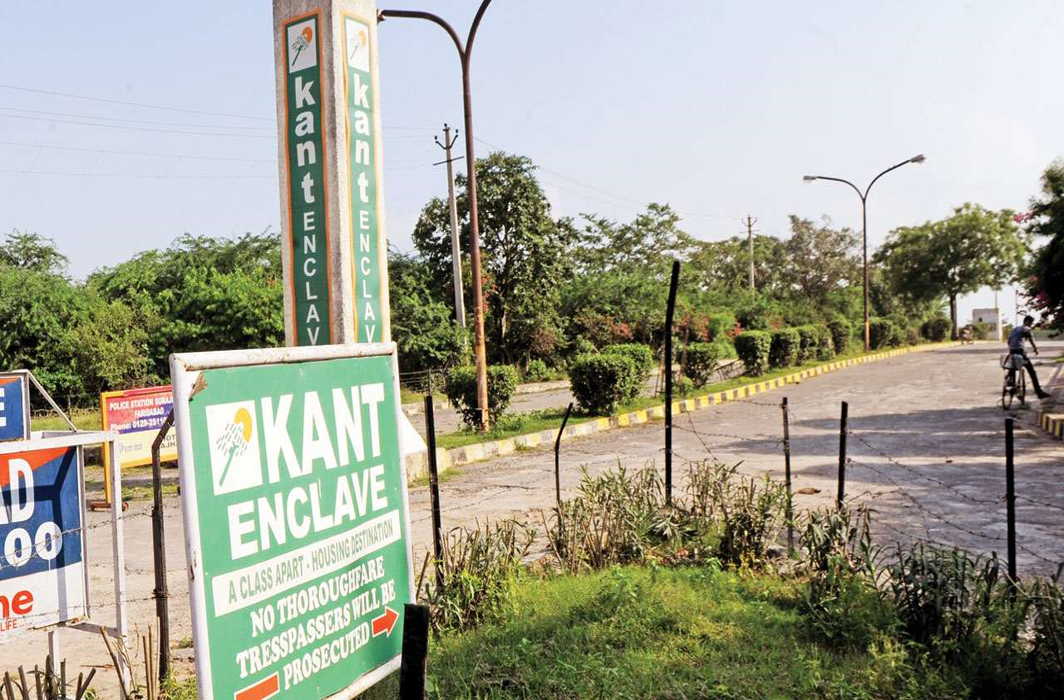 Above: Located close to Delhi, Kant Enclave is a prime property

In a significant judgment, the apex court has ordered that Kant Enclave in the ecologically sensitive hill range be demolished. This stern action will be a lesson for other unauthorised colonies

How easy is it to demolish an entire colony of over 1,600 plots spread over 425 acres with an additional 153 acres developed with roads, sewage systems, electricity grids, open spaces, green belts, parks and roads? That too when the residents include a retired chief justice of India, a former Member of Parliament, a well-known cricketer, a retired World Bank official, a serving IT commissioner, army officers, bureaucrats, politicians, senior lawyers and other well-heeled residents. Impossible, right? But, this is exactly what the Supreme Court ordered.

A bench of Justices Madan B Lokur and Deepak Gupta ordered all houses in the tony Kant Enclave to be demolished as it was illegally constructed in a protected zone of the Aravali ranges in Faridabad. This was 33 years after a real estate firm, R Kant and Company, had got the Haryana government to grant it exemption to construct a film studio and residential complex spread over 425 acres. As the firm violated the terms and conditions, permission was withdrawn. But in 1992, permission was granted again as the company inked an agreement with the Haryana government, promising to respect the terms and conditions. Construction was restarted.

In a few years, an entire colony came up and was christened Kant Enclave. As it was only six kilometres from the Delhi border, it was a prime property. An added attraction was the verdant surroundings of the Aravali ranges. It was also near Badkal and Surajkund lakes. No wonder it attracted luminaries like former Chief Justice of India AM Ahmadi and many others.

Manu Bhatnagar, principal director, Natural Heritage Division, INTACH, says that it is in our interest to preserve the Aravalis in pristine form as it is a water-recharging area and will also cool the area with vegetation. Chandra Bhushan, deputy director, Centre for Science and Environment, told India Legal: “The preservation of the forests in the Aravalis is extremely important as it defines the watershed for the Na­tional Capital Region. As the Aravalis get degraded, we have seen water levels all around it collapse. If we have a better ecology flourishing in the Aravalis, we will also have less dust coming in from Rajasthan as it will act as a barrier.”

All was well with the colony till the Court order struck. Residents were shocked. Often, irregular constructions get regularised with a nominal fine. This is because demolishing buildings where people are already staying is not an easy option. There are many cases in every city where slums and illegally-built colo­nies are ultimately regularised. The general feeling is that demolition will not be an option.

However, if the Kant Enclave demolition happens, it will send a terse message across the country—it does not pay to break the law. Also, that the environment needs to be respected and taken care of and not shamelessly exploited. The ruling is significant as it makes it clear that over 30,000 acres of the Aravalis in Faridabad and Gurugram constitute a forest and no construction will be allowed there.

As it is, the Haryana government had on August 18, 1992, banned construction on forest land under the Punjab Land Preservation Act, 1990. But as Kant Enclave demonstrated, this was not followed at all with highly educated and well-connected people buying plots in the forest.

The Court ordered that the area be cleared by the end of December. It also slapped a fine of Rs 5 crore on the company and asked for the money to be deposited within a month in the Aravali Rehabili­tation Fund. The company has also been asked to refund those who had purchased plots along with 18 percent interest that will be clocked from the date of investment. The Court ordered that those who had constructed houses be given a compensation of Rs 50 lakh by December 31. It directed that the amount would be paid in equal amounts by both R Kant and Company and the town and country planning department of Haryana.

As cases were filed in the Court by those who had bought land there, protracted litigation made many others feel that the area would be ultimately legalised. So they invested in plots and constructed houses there. As many as 33 multi-storied buildings had come up along with 291 plots. This also included three commercial plots. As people had made large investments, they were free to file suits against the com­pany and the state of Haryana demanding more compensation, the Court said.

The residents are naturally worried. They wonder how construction was allowed in the first place and how the company sold plots. Ironically, they have approved building plans, electricity, water and sewage connections.

Without mincing words, the Supreme Court said that the Haryana government had chosen to espouse the interests of miners and builders and not follow its orders since 1996. That led to the ecological destruction of the hill ranges down the years, it said. The government had connived with real estate developers and allowed them to exploit the protected zones to push their commercial interests, causing irreversible damage, the Court said.

Well-known lawyer and environmental activist MC Mehta, who was a party to numerous cases dealing with the Aravalis, told India Legal: “For more than 25 years, the degradation of the Aravalis has been going on. Finally, we have a judgment that should tell those in power that they cannot continue to plunder natural resources as they will have to pay for it. All this happened only because the Haryana government was not keen on enforcing the law.”

The bench pointed out that the law was manipulated in Haryana to favour private persons. Despite instructions from the Court to preserve the ecological balance of the sensitive hill ranges, the government allowed unrestricted development like mining and construction, resulting in Badkal lake getting dry. Both present and future generations would pay a heavy price due to the damage, the Court said.

In 1996, the Court had prohibited mining within a two-kilometre radius around Badkal and Surajkund lakes and construction within five kilometres. The bench remarked that construction had been going on for the last 26 years as the town and country planning department of the state was focused on colonisation of the area. It was obviously at loggerheads with the forest department which was keen on preserving the area. Haryana had emerged in poor light, it said. The forest cover in the state is around 3 to 4 percent, one of the lowest in India.

In government circles, it is not unusual to notice how one arm does not know what the other arm does. While the Haryana government granted the company permission to construct in 1992, the same year it also declared the Aravali and Shivalik hills protected forest land under the Punjab Land Preservation Act.

Turning down the plea of the company and residents not to demolish the houses, the bench said that it appeared that very large residential complexes were constructed despite Court orders that had never given any such permission. It said that there was a notification issued on August 18, 1992, that had said that land could not be broken. “It is difficult under the circumstances to take the view that they had acted bona fide,” the Court said.

The Aravali ranges stretch for nearly 690 km across Gujarat, Rajasthan, Haryana and Punjab. They date back to millions of years when a pre-Indian sub-continent collided with the mainland Eurasian Plate. Over the years, these high ranges got weathered. Carbon dating has shown that copper and other metals in the ranges date back to at least fifth century BC. The Aravali ranges are among the oldest in the world and have a rich and chequered history. It is also one of the richest biodiversity spots in India. There is documented evidence of how leopards, striped hyenas, golden jackals, nilgais, palm civets, wild pigs, the rhesus macaque, pea fowl and Indian crested porcupines thrive there. But numerous species of animals, plants, trees and birds have also vanished.

Rivers such as the Banas, Luni, Sahibi, Sakhi and Sabarmati flowed through it. The verdant forests had acted as an effective shield against desertification. Today, it is one of the most degraded forests in India, ravaged by real estate activity, illegal construction and mining. The Aravalis were a gold mine for miners as they were rich in minerals. For many decades, sand, silica, quartz, marble and other stones were mined from here, disturbing the fragile ecology.

For a long time now, the Supreme Court has repeatedly been pointing out the need to call a halt to mining and wanton construction in ecologically sensitive areas and has expressed grave concern about the Aravalis.

With this judgment, the Aravalis may have a life to look forward to. It may be able to regenerate as nature always does that when given a chance. If there is enough public pressure, the government will also realise that short-term gains do not add up to anything. Ultimately, crucial issues like climate change and water shortage should wake the administration into realising that nature is best left alone.

As Dr Yogesh Gokhale, a fellow at The Energy and Resources Institute, says: “We better save the Aravalis if we are worried about water. We cannot afford to plunder it.”

As the judicia...
Read more