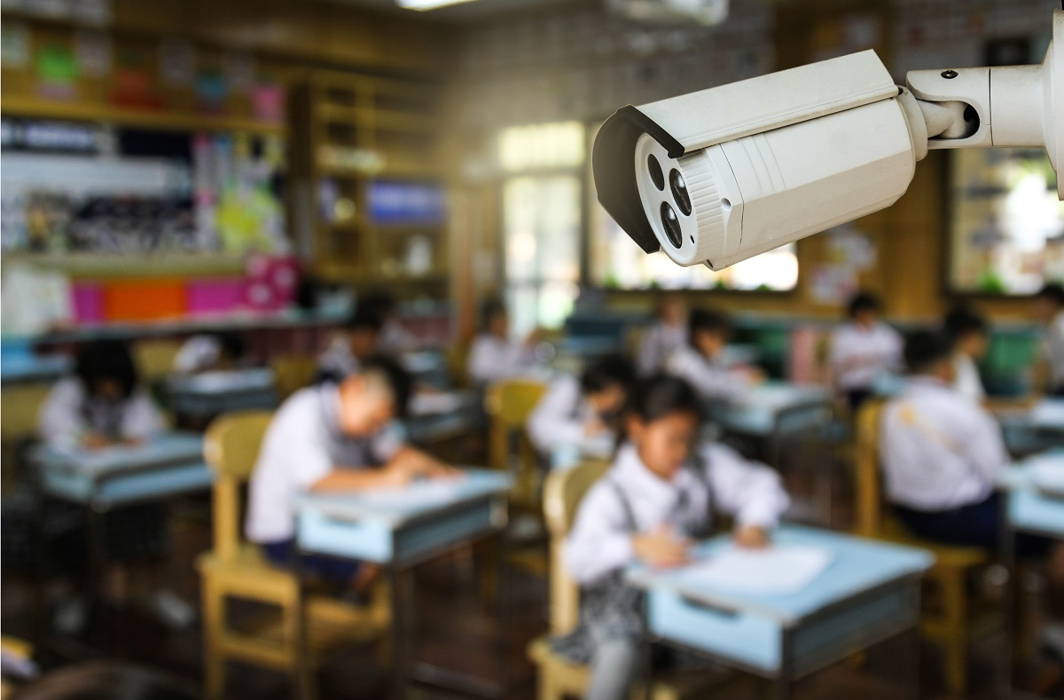 Above: A Delhi High Court bench of Chief Justice Rajendra Menon and Justice V Kameswar Rao  said that there is no privacy issue in having CCTVs in classrooms/Photo: edgecctv.com

The Delhi High Court refuses to stay the state government’s proposal to install CCTV cameras inside the classrooms of its schools, but are teachers and parents happy with the move?

In the film, The Truman Show, the climax happens when the journey of the eponymous protagonist sailing out into the ocean is cut short by his boat literally running into the horizon. Balancing on the boat, Jim Carrey, who plays Truman, reaches out his hand, touching the blue membranous fabric before him. Seconds before, there had been a flashback to a classroom scene wherein a teacher asks the class the inevitable question, what do you want to be when you grow up? “I want to be an explorer,” the young Truman responds, only to be told, “You are late, my dear. There is nowhere left to explore.” Soon, the moment of truth arrives as Truman realises that his entire life has been lived out in a studio, with his every thought being monitored and every move watched by thousands of CCTV, or closed circuit television cameras.

Refusing to stay the Delhi government’s proposal to instal over 1.4 lakh CCTVs inside the classrooms of its schools, the Delhi High Court has recently observed that there is nothing wrong with the move and rubbished the contention that children’s right to privacy would be hit if placed under the gaze of CCTVs. The court was responding to a PIL filed by one Daniel George, pedagogical expert. A bench of Chief Justice Rajendra Menon and Justice V Kameswar Rao said there is “no privacy issue” with regard to having CCTVs in classrooms as “nothing private was being done there”. The decision has disappointed but failed to deter detractors.

A large number of stakeholders, particularly parents, are cheering the government’s move, though. Proponents believe that installing CCTVs in classrooms will promote child safety. They feel it will also usher in better accountability and transparency on the part of school administrations. Some have argued that in the case of a Class XII student shooting dead his school principal in January this year, the presence of a CCTV in her office may have prevented the crime. The feed will be made available to parents through an app, thus averting the problem of principals and senior staff having to spend precious hours scanning the feed, favoritism and corruption sneaking in, and a dual centre of power if outsiders were employed though that would have led to job creation. But as things stand, this is how the government has chosen to allay concerns of fearful parents and discourage criminals in the wake of the Ryan School murder and a five-year-old’s rape in an east Delhi school.

“After several incidents of heinous crimes against children in schools in the national capital region, the government felt the need to put in place a mechanism to monitor campuses, including classrooms, for enhanced security. When a pilot was conducted in five Delhi government schools last year, all stakeholders—principals, teachers, children and their parents—reverted to us with positive feedback. Absenteeism of teachers and students also fell sharply in these schools. That is when we took a call to scale up the programme. We believe it will go a long way in making our schools secure and safe spaces for children,” Atishi Marlena, who served as advisor to Deputy Chief Minister Manish Sisodia until she was sacked unceremoniously in April by the central government but is credited by Sisodia for overhauling the education system in the capital’s public schools, told India Legal. In fact, the first CCTVs were put up in three schools in Moris Nagar and East Vinod Nagar as early as in 2015. The feedback had indeed been positive, going by media reports.

Meanwhile, opponents of the move criticise it on several counts. The chief among these are children’s freedom to make mistakes, explore and learn for themselves and teachers’ dignity and the possibility of them being bullied by parents and harassed by officials. With increasing commercialisation of education and parents expecting more value for money, teachers do face more pressure these days and CCTVs might add an unnecessary burden.

As Ajay Veer Yadav, teacher at a Karol Bagh school and general secretary of the Government School Teachers Association, said, “CCTVs are unlikely to improve the quality of teaching as it has to take place in an atmosphere of trust and freedom”. But their presence, on the other hand, might lead to educators making a false show of putting in extra effort to earn brownie points, he countered, adding that in any case they will find it hard to remain natural. “Teaching is a noble profession. We cannot afford to disregard this fact. It is also an art, but it will soon become an extinct one, as teachers will lose motivation when they come to terms with the fact that the government spies on them so as to make sure they do their job properly,” he said. The concept of privacy extends to schools and school administrations, Yadav also told India Legal, and said that the move might yield results if applied to other categories of government employees, even leading to reducing corruption, but “it would prove ineffective in case of teachers, owing to the very nature of their profession”. “This is by no means the end of it. The final verdict, when it is out, will most likely be appealed in the Supreme Court,” he added.

There are takers for his view. Eminent educationists and child psychologists have also come down on the idea of CCTVs on account of the detrimental impact on students. If constantly policed by parents, they have a high chance of turning into timid weaklings, lacking in social and life skills, they aver. “Making friends is an important component of the process of a child’s growth. Overbearing parents who constantly interfere with the behavioural development of a child do a great disservice to them in the name of disciplining them. CCTVs will encourage this trend,” eminent psychiatrist Premlata Chawla, who consults at Vimhans Hospital, said. And the sufferers of its adverse effects might include other children. A few on social media have discussed the “don’t talk with X kid” syndrome wherein overzealous parents might become the cause of isolation and stigmatisation of a single hapless pupil. The relentless pressure on a student to perform academically may also prove too much for him to handle and end up breaking him.

“The problem should not be seen through the prism of a defaulter and surveillant. Teachers should play their role in imparting values and building character. Should fear of law be the only reason why a child does not commit a crime? Besides, there will always be some places out of the reach of cameras, like the playfield or the toilet where the Ryan School murder took place,” educationist and former DPS RK Puram principal Shayama Chona told India Legal.

But for a city faced with the reality of violence entering its school campuses, the wisdom of the move has actually come down to a trade-off between safety and privacy. This is despite the scarecrow effect, wherein a criminal times his moves according to the location of the camera and the authorities’ reaction time and thus fools the hawk eye. However, the deterring effect of the camera is deemed to be present for a proportionately larger number of lawbreakers.

CCTVs are a means for schools to protect themselves in case of a mishap, Ameeta Mulla Wattal, principal, Springdales School, Pusa Road, told India Legal. “Education has changed 360 degrees. The education system has become more commercial, expectations from schools have changed. We are in a completely new world. Ten years from now, we will have metal detectors in schools, so it does not really make a difference. CCTVs are a tool for schools to protect themselves in case of a mishap. Besides, in case of allegations of underperformance, at least there will be some evidence with us. Most of the time, teachers are the fall guys. Now the parents will get to see for themselves how much work goes into managing a class of 40 when they cannot even manage their own child,” Wattal said. Chona, on the other hand, favoured placing of security cameras at the entrance of schools to monitor visitors, and advised deputing a new set of capable employees to watch and respond to the feed as a necessary second step, as “the idea may look good on paper but the devil lies in the detail”.

Wattal is spot on about CCTV surveillance being state-of-the-art. The world over, schools are slowly switching on the camera, countries like the United Kingdom, United States, Australia and Malaysia being no exception. In the US, after a shooting killed 20 students in Connecticut’s Sandy Hook School, CCTV cameras were introduced in classes. Much like the Delhi High Court, American courts, too, have held that they do not violate the Fourth Amendment which protects citizens against unreasonable searches and seizures by the government as they are placed in such locations where students cannot expect to have privacy. But in the UK, recently, there was a scandal when a school was found to have installed cameras in pupils’ toilets.

Still, is there no other way for schools to protect their students? Is centralised control of security the only solution? How neutral and fair can schools be to students if they are prepared to answer to parents ready to complain at the drop of a hat? Is liberty worth sacrificing for security? With GPS, Aadhaar, face recognition software and now CCTVs in classes, are we fast turning into a surveillance state? How soon can a utopia become a dystopia, if based on a flawed principle? These are some questions for our policymakers to ponder as the government goes ahead with its plan of installing classroom CCTVs.

No Right to Education