The Gujarat State Higher Education Council Act, 2016, given gubernatorial assent last month, will bring state-run universities under the direct control of a council headed by the chief minister. This could adversely impact the functioning of these institutions

Will educational institutions in Gujarat henceforth live a shackled existence and be at the mercy of the state government? The mantra “minimum government, maximum governance,” often called the Gujarat model, now seems to have no place in the scheme of things with Governor OP Kohli giving his assent on February 3 to the Gujarat State Higher Education Council Act, 2016. With one stroke of his pen he deemed that all state universities in Gujarat officially stand to be under direct dominant control of the state through the Council.  They stand to lose even the fig leaf of autonomy they enjoyed till now.

The Bill was passed in the Gujarat assembly on March 31, 2016 which was the last day of the budget session without any debate or discussion in the absence of the Congress opposition; its members had been suspended by the Speaker at that point and were barred from the House.

Under the Act, the state Higher Education Council (HEC) will come into being as the supreme body for higher education to be headed by the chief minister with the education minister as the vice-president. The rest of the Council to be appointed by the governor will comprise of secretaries of various departments of the government, five vice-chancellors, a representative of a private university, an eminent scholar from an institute of national importance located in Gujarat, five eminent persons from various fields and three academics from the teaching community.

Since the Council will be the supreme body for higher education in the state responsible for perspective planning, development and monitoring, all educational institutes will come directly under its control. Besides conferring overriding powers in administrative, financial and academic matters, the Act also includes a clause that indemnifies Council members from prosecution for “anything done or intended to be done in good faith”. Therefore, there is no legal recourse if any injustice—actual or perceived—is done to anyone therein. 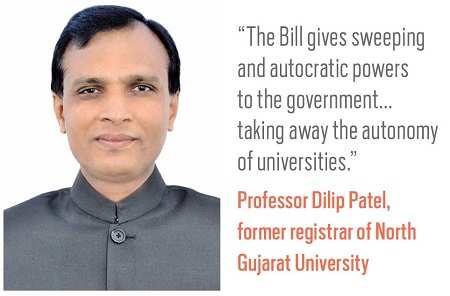 According to Mahadev Desai, vice-president of the All India Federation of University and College Teachers Organisations (AIFUCTO), the fact that there is no legal recourse is the precise reason that no sooner the government completes the formality of notifying the Act, it will be challenged in court.  In fact, the academic world is in ferment in Gujarat after the BJP-led government pushed through this Bill after ensuring that the opposition was suspended from the assembly. With an NDA-appointed governor in place after UPA-appointee Kamala Beniwal had been transferred from Gujarat, gubernatorial approval was only a formality.

It was not that the governor was not apprised of the concerns over the Bill.  In June last year, a 35-strong delegation of academics drawn from various universities and specialisations from across the state had called on Governor Kohli to draw his attention to the colossal damage that such a “draconian” bill would inflict on higher education. Said Professor Dilip Patel, a former registrar of the North Gujarat University: “The Bill gives sweeping and autocratic powers to the government, completely taking away the autonomy of universities.”

Distinguished academics from MS University of Baroda led by Professor Anil Kane had in a similar appeal to the governor also pointed out that the state government already had excessive powers to regulate universities which have impacted higher education bringing the MSU ranking down to 76 in the country. Professor Rohit Shukla, president of the Gujarat chapter of Save Education pointed out that “Clause 5 of the Bill empowers the Council to recommend or the government to suo moto direct any university to make any modifications, notwithstanding anything contained in any law and the University will be duty-bound to carry it out. This provision will be a death blow to the autonomy of the university.”

Rimmi Vaghela, secretary of the Gujarat unit of the All India Democratic Students’ Organisation (AIDSO) was quick to point out that though the Gujarat Higher Education Council has been formed under the recommendations of the Universities Grants Commission (UGC) and the Rashtriya Uchchatar Shiksha Abhiyaan (RUSA) along with eight other states—AP, UP, Tamil Nadu, Karnataka, Kerala, West Bengal, Punjab and Maharashtra—none have the chief minister as the president.

Vaghela did not mince her words: “The chief minister heading a council which recommends and reports to him is indeed a contradiction in terms.

The ‘Gujarat’ model, as compared to the council in other states, is truly draconian. All educational institutes directly come under the government and thus, these vibrant centres of free debates, discussions and knowledge will instead become places of government agenda and advertisement venues of its political campaigns.”

A look at the provisions of the new Act makes it clear that the Council abrogates to itself the powers to buy, sell or use university land for any purpose it thinks desirable. By its overarching powers, it also means that all elected university bodies like academic councils, the syndicate and senate will stand subordinated to the Council and will virtually lose their relevance due to government control.

All Council members will be deemed to be public servants within the meaning of Section 21 of the Indian penal Code. “This provision leads also to the possibility that all the teaching and non-teaching staff will come under the authority of the Council and will be counted as public servants. This simply means that all the staff of such institutes will have to make themselves available for all government programmes which may stretch from polio campaigns and swachta abhiyans to election duties or politically loaded government campaigns. This subservience will lead to total emasculation of campuses,” added Vaghela.

She has a point. The Council has recommendatory and directional powers “to plan and coordinate development of curriculum and courses to prepare global level experts in various disciplines in higher education in consultation with the universities.” Shorn of jargon and juxtaposed with the emerging penchant for re-writing history having such sweeping powers is clearly not healthy.

The seemingly innocuous clause which talks of “facilitating mobility” of teachers and students in and outside the state to develop programmes for effective academic cooperation and interaction between the faculties in the universities and colleges has a sub-text, say academics.

It is a stick which will be brandished for inter-university transfer of both faculty and students if their conduct is found inconvenient to the powers that be.

Dr Manish Doshi, spokesperson of the Gujarat Congress, hastens to point out that this is not the first time that the BJP-led government in the state has worked towards appropriating universities to further their political goals. “The present prime minister, in his long stint as chief minister was desperate to do so and had begun planning to this end within months of taking over in 2001,” he said.

Ironically, in June 2015, Kohli even signed away some of his own powers when he gave his assent to the controversial Gujarat Universities Laws (Amendment) Bill 2013 which was passed by the Gujarat Vidhan Sabha when Modi was the chief minister. By this law, the governor as chancellor was shorn of all powers of the 14 government universities, including the power to appoint vice-chancellors and other key governing members. Though he continues as chancellor of these universities, he has no executive powers.

In the days to come, the Gujarat State Higher Education Council Act, 2016 will be the subject of much controversy, protests and litigation. Should teachers and students be waging legal battles or concentrating their energies in the classrooms is the big question?

Well, one view is that they were pursuing academics till the state began its meddling.