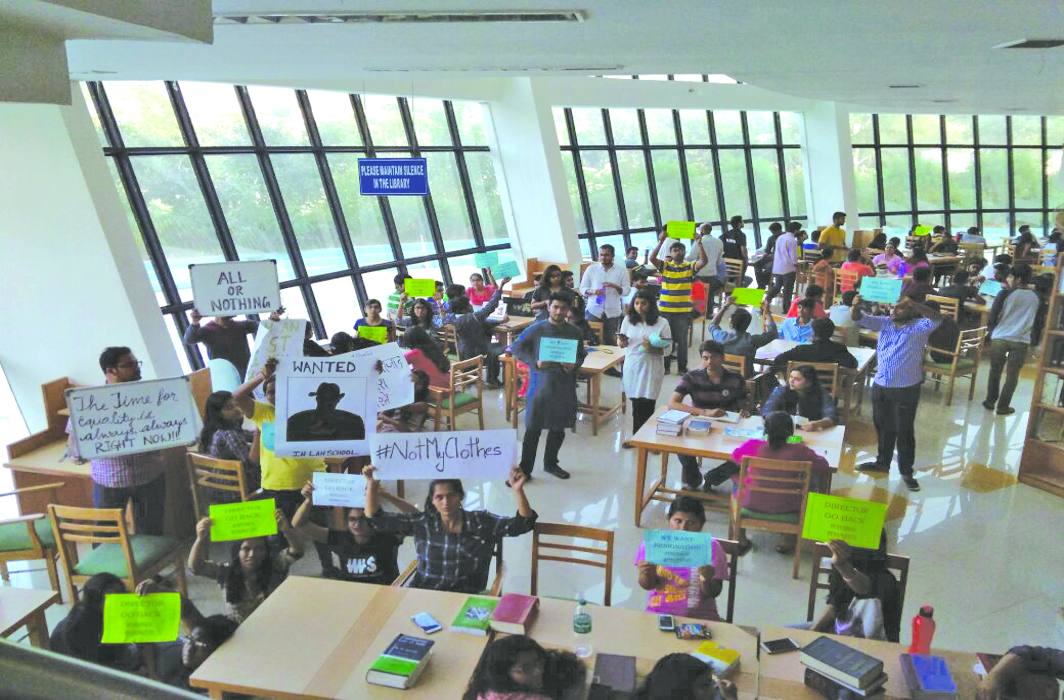 NLIU students in Bhopal raise placards to highlight their protest

Students of this prestigious university in Bhopal are up in arms and one of their main grouses is against the director, whom they accuse of acting like a dictator and being prone to making sexist and casteist remarks

Since November 9, the prestigious National Law Institute University (NLIU) here has been swamped by protests. A large number of Special Task Force (STF) policemen are guarding the campus to avert confrontation between agitating students and a recalcitrant administration.

Amid the prevailing tension, classes have been suspended and uncertainty looms regarding the resumption of teaching. Students say they are terrified and worried about their future as they fear vendetta by the administration. “Some faculty members and even the director are intimidating us,” one of them alleged.

All eyes are on Madhya Pradesh High Court Chief Justice Hemant Gupta, who heads the General Council that appoints the NLIU director. Many wonder if he will intervene. A team of the MP government’s top officials, including the principal and law secretary and the higher education commissioner, has prepared a report to be submitted to the chief justice after talking to the agitating students. The students have also written a long letter to the chief justice, detailing their grievances.

In the eye of the storm is NLIU director SS Singh whose 10-year term is due to end. Agitating students are adamant that he resign, accusing him of running the institute like a dictator. They have also accused him of being prone to making sexist and casteist remarks against students. The director, a relative of Union Home Minister Rajnath Singh, however, dismissed the students’ demand as “a ploy of some vested interests out to malign the premier law institute”. About his relationship with the home minister, Singh reportedly said he owed his position to his hard work in academia over the last 40 years and not to his relatives.

The students’ anger against the director had been simmering for a long time. On November 9, a female student accused Singh of making a sexist remark. She alleged that the director called her to

Her narration of her alleged humiliation to others sparked protests as students boycotted classes and blocked the campus’ main gate. Seeking the director’s resignation, they articulated other grievances against the NLIU administration. They also gheraoed the director’s bungalow on the campus and raised slogans such as “Bacche hai hum, kaidi nahin, college hai ye, jail nahin (We are kids, not prisoners. This is a college, not a jail).”

The grievances include preferential treatment to some students, delay in publication of exam results, the faculty’s failure to complete the syllabus in some subjects and a questionable re-evaluation policy. They are also pressing for an extension of library timings.

In a statement, the students alleged: “Multiple instances of rampant corruption, sexism, casteism, moral policing, and lack of financial transparency have made the student body lose confidence in the autocratic rule that has subsisted for the past ten years.” They cited an example of a fourth-year female student who had been declared passed after a professor raised her marks. 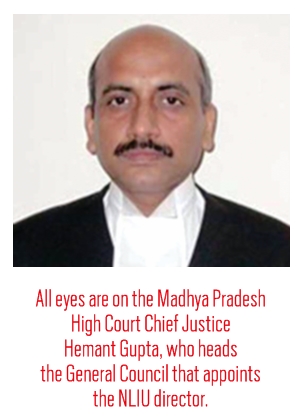 In a letter to the University Grants Commission chairman and NLIU General Council member Ved Prakash, the students said: “In a blatant display of arbitrariness, the administration and faculty of the University colluded to pass a student—who was failing by more than 10 marks—on grounds of personal bias. When confronted, the professor gave us a flimsy explanation, claiming that the question had not been evaluated, and thus she had increased 7.5 marks (of the student)”.

The students have also taken to social media to air their grievances with hashtags such as #FreeNLIU and #PinjraTod. They have refused to recognise Singh as director, and #NotMyDirector is gaining popularity on social media.

They alleged that the administration was apathetic and that Singh even tried to intimidate them by screaming and asking their names and batches as he wanted to take personal action against them for the protests. Meanwhile, parents, alumni and other law university students have also joined forces with the agitators.

“The career of our kids is in peril. We are deeply saddened by the response of the director to the grievances of the students and demand his resignation,” a group of parents outside the campus reportedly said. NLIU alumni have also spoken up against the director, challenging his statement that there were no problems on the campus in the 10 years of his term.

In a letter, the alumni said: “In 2013, mass protests took place on similar issues but the agitating students faced grave repercussions and were made victim of administrative harassment. Consequent changes in the rules were also rolled back within a short period of time.”

The protesters said: “We fear a 2013 kind of crackdown on students,” alleging that Singh has “unnecessarily summoned the police to the college multiple times. This, despite the fact that our protest is peaceful”.

As a mark of support for the ongoing protest, student associations have issued a joint statement showing their solidarity.

Director Singh has strongly denied the charges, wondering why these accusations are being levelled at him, all of a sudden, in his 10th year as director. Singh, while talking to the media, rubbished the allegations and said some elements inside the institute were fuelling this campaign against him. He said the General Council led by the chief justice of the Madhya Pradesh High Court had appointed him and he would only resign if the Council asked him to.

The district administration also tried to intervene to end the protests but to no avail as the students are adamant about Singh’s resignation.

Bhopal Lok Sabha member Alok Sanjar told the media that he had received an e-mailed complaint from the students and would be forwarding it to Union Law Minister Ravi Shankar Prasad and Chief Minister Shivraj Singh Chouhan.

Set up in 1997, NLIU, Bhopal, is no stranger to controversy. But the ongoing one has posed a serious threat to the credibility of the institute.