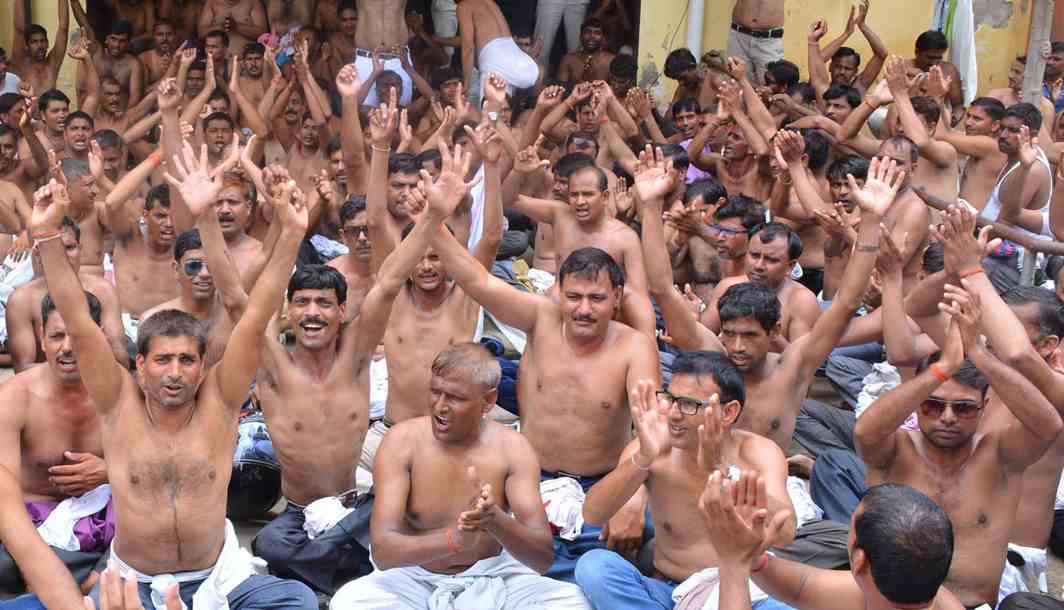 Above: A “topless” demonstration by Shiksha Mitras in Mathura. Photo: UNI

Shiksha Mitras, or para-teachers, filled the basic educational infrastructure gap for children. In Uttar Pradesh, a severe shortage of teachers has left classrooms bereft of faculty

When the Samajwadi Party regularized the appointments of Shiksha Mitras, education’s honourable foot soldiers in Uttar Pradesh, it was towards a noble good, that of educating children within a stifling shortage of teachers in the state. These Shiksha Mitras were appointed ad hoc, by the Kalyan Singh government in the 1990s.

A recent Supreme Court order, however, pulled the plug on that policy, putting the future of about 1,78,000 Shiksha Mitras in jeopardy. There have been reports of as many as 12 Shiksha Mitras committing suicide following the verdict.

Shiksha Mitras were originally inducted as volunteers, on an honorarium of Rs 1,450 per month. They were to act as assistant teachers in primary schools. The executive order to this effect was passed on May 26, 1999. This emanated from the need to increase access to education for all and to improve the teacher-student ratio. Youth from villages, who had passed their intermediate exams, were roped in as Shiksha Mitras.

In a further government order of July 1, 2001, it was mentioned clearly that the scheme was not for employment in regular service, but to provide an opportunity to the rural youth to render community service.

However, in 2009, when the Right to Education Act, aimed at free and compulsory education for children in the age group 6-14 years, was passed, there was a renewed thrust on access to quality education. Section 23 (1) of the Act dealt with qualifications for appointment of teachers, and the National Council for Teachers’ Education (NCTE) was designated as the authority entrusted with deciding the qualifications for teachers’ appointment.

The NCTE notified on August 23, 2010 that the Teachers Eligibility Test (TET) was the key qualifying criterion for teachers. However, in view of the shortage of qualified teachers that states must be facing, the NCTE on September 10, 2012 also offered a relaxation to certain categories of persons till March 31, 2014.

In January 2011, The NCTE also accepted a proposal from the UP government for training graduate Shiksha Mitras by open and distance learning (ODL). The NCTE, however, made it clear that no appointment of untrained teachers was permitted. They were to be given a two-year diploma in elementary education through ODL mode.

Interestingly, the UP government, in a May 30, 2014 notification, amended the UP RTE Rules of 2010, (introducing Rule 16-A) and authorised itself to relax the minimum education qualification for appointment of assistant teachers in junior basic schools.

It also amended the UP Basic Education (Teachers) Service Rules, 1981, that lay down sources of recruitment and qualification for appointment of teachers. This amendment enabled Shiksha Mitras to be appointed as teachers without having the qualifications prescribed under Section 23 of the RTE Act.

This whipped up a storm. How could Shiksha Mitras, who do not confirm to the statutory requirement of qualifications for appointment of teachers as per the August 23, 2010 notification be appointed to these posts? How could the state government arbitrarily modify the qualifications sought for the post of teachers, when it is the NCTE which is designated as the deciding authority in this matter, as per the RTE Act?

The matter went to the Allahabad High Court—the argument being that the 2014 amendments of the UP government were in conflict with the August 23, 2010 notification of NCTE. There could be no permanent exemption from TET and relaxation could only be for limited period, and that too for teachers already appointed, not Shiksha Mitras.

Prashant Shukla, the counsel for those candidates who have cleared TET and have still not got jobs, explained that while TET is valid for five years, there are candidates who have waited for seven years after qualifying. If the intention was to absorb Shiksha Mitras as regular teachers, why did the government make others go through the grind? The government’s intention was to extract the maximum with minimum expenditure.”

He admits that Shiksha Mitras have a genuine grouse. “They were made to work for 15 years. Now when they have families it’s natural for them to expect a raise.” But he adds that experience can never be a substitute for qualification. And it’s the nodal authority, the NCTE, which has made TET the crucial qualifying criterion.

The Shiksha Mitras and the government took the stand that they were recruited because of a shortfall of sufficiently trained teachers in primary schools. Shiksha Mitras were duly selected and had undergone all training at district training institutes. Most of them were graduates and all of them were at least intermediates.

Besides citing their long length of service, they also pointed to the positive role they had played in spreading education. In the high court they cited a report of EdCil saying para-teachers’ appointment has led to lower pupil teacher ratio.

However, the three-judge bench of the High Court— comprising Chief Justice DY Chandrachud and justices Dilip Gupta and Yashwant Verma—quashed the appointment of Shiksha Mitras as regular teachers. In its ruling, the bench said: “The amendments to the state RTE Rules, 2011, and the Service Rules of 1981 were in conflict with the mandate of Section 23(2) under which power to relax the minimum qualifications was vested only with the central government for a limited period.”

The matter then reached the Supreme Court, which, on July 25, 2017, upheld the high court verdict. The ruling said: “Regularization of Shiksha Mitras as teachers was not permissible.”

The order, passed by Justices Adarsh Kumar Goel and UU Lalit said: “On the one hand, we have the claim of 1.78 lakh persons to be regularized in violation of law, on the other hand is the duty to uphold the rule of law and also to have regard to the right of children in the age of 6 to 14 years to receive quality education from duly qualified teachers.”

However, it has also ordered that they should be given the opportunity to be considered for recruitment if they have acquired or they now acquire the requisite qualification for the next two recruitments. Plus they can be given some age relaxation and weightage for their experience.”

Typical political reactions followed. “The government didn’t fight the case effectively,” Hilal Naqvi said on the Loktantra show of APN channel. In turn, Dhiraj Ojha of the BJP said the case would not have reached the SC if the then SP government had put up a strong case in the Allahabad High Court. Congress spokesperson Arun Kumar said it was Kalyan Singh who started the scheme.

Chief Minister Yogi Adityanath has formed a committee headed by the Additional Chief Secretary Raj Pratap Singh to find a way out after exploring all the legal hiccups.

Cabinet minister Anupama Jaiswal has assured the affected side that the government is taking the matter seriously.

However, that’s no balm for the Shiksha Mitras who are now on the roads. Shriram Saini, a Shiksha Mitra from Sambhal, said: “An arrangement that had been working well for 16 years has been terminated. During the assembly elections, the BJP had promised us in its election manifesto that within three months of coming to power they will find a legal remedy to our problem. Today they have turned a deaf ear. If the UP government doesn’t resolve the issue the struggle will intensify. We will do whatever it takes.”

Poonam Maurya, who teaches at a government school in Basti, tends to agree. She says she has seen Shiksha Mitras play a great role in the running of schools in villages. “They have worked hard for 15 or more years and it’s only natural for them to expect improvement in their standard of living. Some of them are in their forties now. Governments promised them the moon, but now they have crashed to earth.”

She says the problems cropped up when some of them used political or financial clout to get absorbed. Politicians started giving them assurances of regularizing their posts with a view to capturing their votes. A better alternative would have been to continuously increase their honorarium.

While the Adityanath government has sought 15 days’ time to resolve the issue and urged the Shiksha Mitras to end their stir for the time being, it’s clear that the apex court order will have to be implemented. But certain key areas of concerns still remain unaddressed.

The Supreme Court in its judgment quoted elaborately from leading educationists across the world, like Germans Herbart, Froebel, Danny Hillis, Francois Rabelais, William Arthur ward and late Dr APJ Abdul Kalam, to bring home the point on the necessity for trained teachers.

“The skill of the teacher should be lined with such ingredients that it kindles the spark of a child….”

“Education… is the awakening of the inner self and faculty of the child to the ways of the world…. The job of a teacher is not to fill the time-table with dull unintelligible tasks. This violates common sense and creativity brutally.”

“Teaching is infusing of ideas instead of stuffing the brain with facts.”

However, such noble thoughts are quite at variance with the ground realities of schools in the country, especially in Uttar Pradesh. In a report presented by the Ministry of Human Resource Development in parliament on August 1, it was stated that there is a shortage of 9 lakh teachers in the country, and UP leads, with a shortfall of 2.4 lakh teachers, followed by Bihar (2.03 lakh) and Bengal (87,000). The report cited disinterest of governments of the day in appointing teachers as the main reason.

Another facet of hopelessness is the miserable infrastructure in schools in Uttar Pradesh. The APN team recently visited a host of schools in Unnao and Devaria and found that students were studying in classrooms where the roof can collapse anytime, where toilets are in a complete mess, where just two teachers are handling the entire workload of the school of 170 students, and where the water is salty and unfit for consumption.

In some cases the school compound is being used as garbage dumping ground, and in Devaria a family has occupied a classroom and converted it into their residence.

In its order, the Allahabad High Court justified the emphasis on TET, saying: “The emphasis on clearing the TET is to ensure maintenance of quality in imparting primary education… These requirements should not be viewed merely as norms governing the relationship of a teacher with the contract of employment. These norms are intended to fulfil and protect the needs of those who are taught, namely, young children.”

Shiv Kumar Shukla, who is leading the struggle of Shiksha Mitra Sangathan, says he is a graduate and followed it up with a BTC, which is supervised by the government and is no less a qualification. He says it’s a misconception that non TETs are not fit enough to teach and says his teaching experience of 17 years can’t be discounted. “I want my right, I want my dignity back. And I will do whatever it takes to make my voice heard,” he says, when asked about the possibility of the Shiksha Mitras stopping trains in the next phase.

He reminds that the TET has itself become a big scam in the state. Shukla’s reference is to the arrest of Uttar Pradesh Secondary Education director Sanjay Mohan in February 2012 in connection with alleged irregularities in the Teachers Eligibility Test (TET). He was allegedly running a racket of passing TET candidates for money.

How can school education progress when the fundamentals are all wrong?

—With inputs from Khurram Nizami