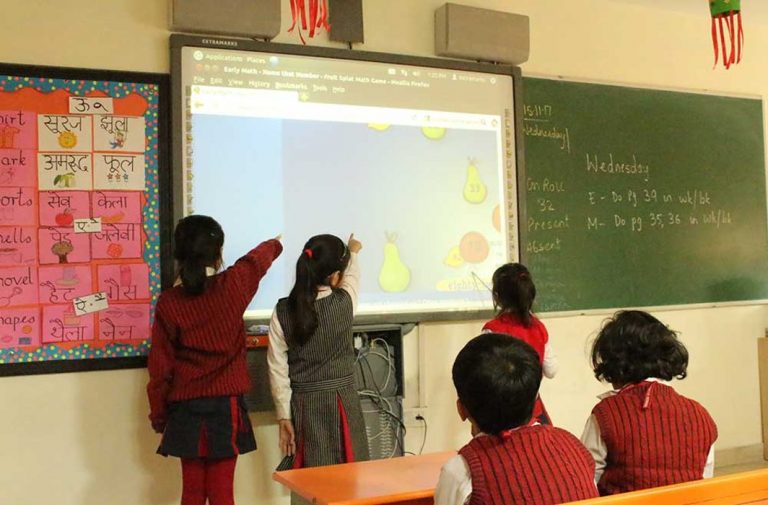 Above: Children in a classroom at a private school in UP. Enrolment of weaker section kids is far from satisfactory

Private schools in the country are guilty of ignoring the Right to Education Act which mandates a quota for children from weaker sections of society. Now, it becomes a political issue

Ajay Kumar Lalloo, leader of the Congress Legislature Party in the Uttar Pradesh Assembly, gave out some startling figures relating to school admissions under Section 12 (1) (c) of the Right to Free and Compulsory Education Act, 2009. Lalloo said that against the six lakh admissions which can take place in the state under the Act, only 3,135 children got admission in the 2015-16 academic year, and 17,136 in the 2016-17 academic year.

Section 12 (1) (c) of the RTE Act mandates that non-minority private unaided schools and special category schools should keep aside “at least 25 percent of their seats for children from the society’s economically weaker and disadvantaged sections at no fee to the children, with the government bearing the cost”. He asked the government if any “action was planned against schools like City Montessori, Navyug Radiance and Virendra Swarup which were not ready to admit children from under-privileged and weaker sections of the society under the Act”.

It is not a problem confined to UP. While influential private unaided schools have been resisting the implementation of the Act, making Uttar Pradesh a poor performer, Gujarat, in comparison, has fared much better. Admission targets in the latter state under Section 12 (1) (C) were exceeded after a slow but steady start. In the academic year 2013-14 only 549 students were admitted against a target of 5,300 but in 2016-17, 48,383 children got admission in various schools against the targeted number of 46,000. In 2017-18, the target of 60,000 admissions was over-achieved by 2,419. Yet, these numbers fall short of 92,000, which is 25 percent of the total seats available in Gujarat.

“The State of the Nation: Section 12 (1) (c) 2017” report by Ankur Sarin, Ambrish Dongre and Shrikant Wad states that the implementation of the all-important section “has been sporadic at best, with only 11 states and one Union Territory having admitted students under this clause. Financial burden on the states is stated to be one of the main reasons for the patchy non-implementation of this provision”.

The report finds two of UP’s neighbouring states—Madhya Pradesh, Rajasthan— besides Karnataka, to be among the better performers. “These states have the highest enrolments across the country when it comes to absolute numbers,” it says. These three states “use an online system to handle and streamline the complex process of application, allotment and admission”.

In Lucknow district alone, there are 25,000 seats available every year. Last year, 29,000 students got through the lottery system in 49 out of the state’s 75 districts under this “crucial” clause. The process to apply for admission under the clause has gone online since last year. According to social activists, besides resistance from elite schools, there are a myriad challenges blocking the Act’s success in UP. Some of these are:

“The State of the Nation: Section 12 (1) (c) 2017” report states that the online platforms to admit students were implemented for the first time in Lucknow and Raipur to “help inculcate more transparency in the system and to reduce the burden of all stakeholders in the system with the help of a technology platform” but admits that “implementation was not smooth”.

Rajasthan and Madhya Pradesh doing relatively better as compared to UP in this sphere is explained by the fact that in the former two states, parents can apply both online and offline and the states allow them to experiment with choices of schools post-allotment based on their priority number. According to the report: “If a candidate does not take admission through an allotment in the first round in Rajasthan in the stipulated time period, usually one or two weeks post result, the seat is instantly available to another candidate…”

The advantage for parents in Madhya Pradesh and Karnataka is that they are allowed to articulate their choices before submitting their application. In Karnataka, the rules segregate candidates from special categories, and allot them seats first. This is a guaranteed provision for children from vulnerable groups.

In reply to a question whether the government will ensure implementation of the RTE Act in some of Lucknow and Kanpur’s elite schools, Basic Education Minister Anupama Jaiswal replied in the affirmative.

However, Pandey said that these schools were cocking a snook at the government which was helpless. He said the administration takes a skewed view of the Act which lays down that “schools have to keep aside at least 25 percent of their total seats”.

Calling the Lucknow administration callous, inefficient and beholden to some private schools, he said that it hardly ensures implementation of the Act’s basic cut-off percentage. On the other hand, the Kanpur district magistrate has asked schools to file an affidavit that they will admit students under RTE rules, Pandey said. So far 3,000 forms have been filled in the first leg of the online process. No admission has taken place yet.