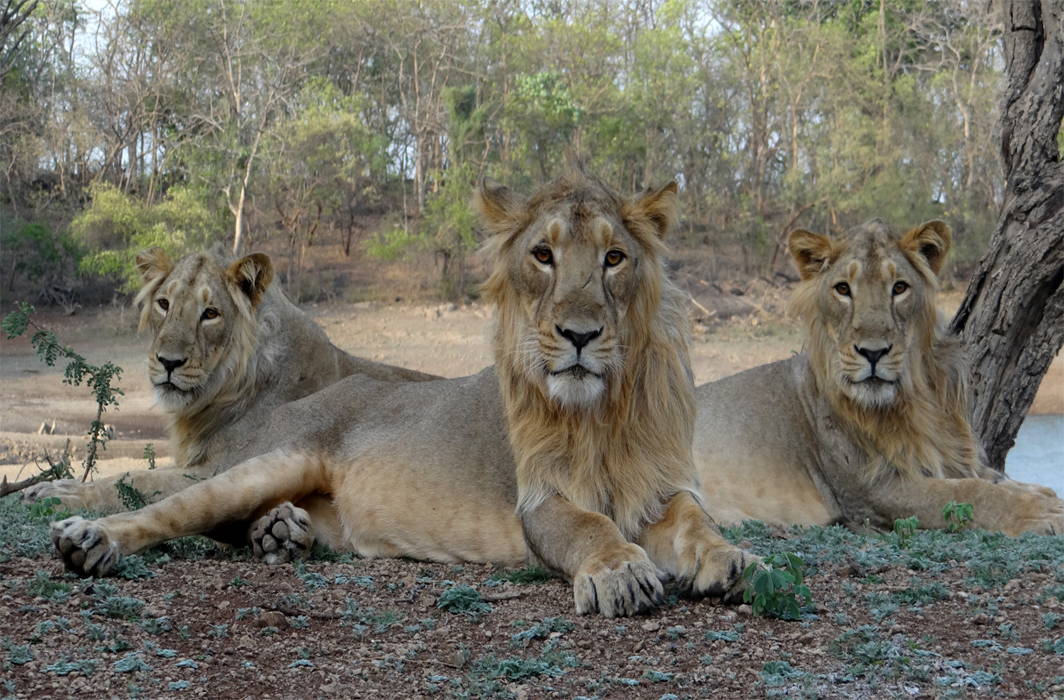 Above: Though lions are one of the mainstays of tourism in Gujarat, yet the state government has failed to take action for their welfare/Photo: forests.gujarat.gov.in

The worst fears of the Supreme Court, which ruled in favour of an alternative home for the Asiatic lions in Madhya Pradesh five years ago, seem to be coming true. Twenty-three lions have perished in the last 20 days in their only home of Sasan Gir in Gujarat. The government, which initially tried to cover this up by attributing the deaths to in­fighting, has now been forced to admit that many were caused by canine distemper and babesiosis infection.

Based on a PIL, the Supreme Court on October 3 questioned Gujarat and the centre over these deaths. “This is extremely serious… so many lions have died,” observed a bench headed by Justice Madan B Lokur. “Lions must be protected. Why so many deaths…you must find out the reasons and do something to stop it,” the bench told Addi­tional Solicitor General ANS Nadkarni. The bench has given him a week for this and has sought an explanation from Gujarat on these deaths.

The distressing part is that Gujarat has been dragging its feet in handing over a handful of lions to neighbouring Madhya Pradesh. Warnings by lion conservationists were ignored all along, leading to the devastating deaths of these prized cats in the only habitat for them in the world. Gujarat’s forest minister, Ganpat Vasava, had admitted in the assembly on March 3, 2018, that 184 lions out of a total of 523 in Gir forest had died between 2016 and 2017.

The state forest department carries out a lion census every five years. The 2005 survey had counted 359 lions, and this grew to 411 in 2010. The latest census in 2015 found 523 lions, 109 of whom were male, 201 female, with 140 cubs and 73 sub-adults. It was only recently that Chief Minister Vijay Rupani stated that their number stood at 600. The mismatch between his statement and that of the forest minister is telling.

Nevertheless, the minister’s statement, made much before the present deaths, alarmed the Gujarat High Court. It not only took suo motu cognisance of it, but also issued a notice to the state and central governments. The division bench of Chief Justice R Subhash Reddy and Justice VM Pancholi also appointed senior advocate Hemang Shah amicus curiae to assist it in the matter.

Ravi Chellam, a veteran wildlife conservation scientist, has for long been seeking translocation of these lions. He has said that concentration of an entire population of one canine breed in one area leaves them highly vulnerable to disease, weather phenomena or forest fires.

The Supreme Court in its April 15, 2013, order directed the Union ministry of environment, forest and climate change to take urgent steps for the reintroduction of the Asiatic lion from the Gir forests to the Kuno wildlife sanctuary in Madhya Pradesh. It had asked the authority to carry out the order in “letter and spirit” within six months. 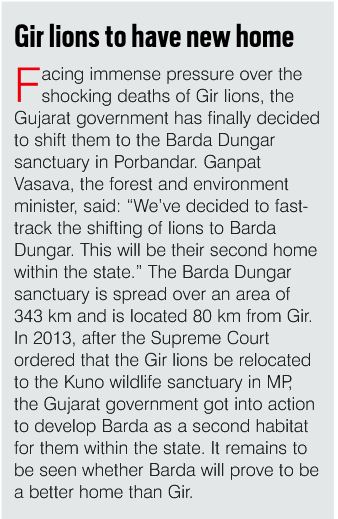 The International Union for Conser­vation of Nature also advised that a second home be found for this species. India’s National Wildlife Action Plan 2017-31, the official document that guides conservation of wildlife, too advised “suitable, alternative homes for single, isolated population of species such as Asiatic lion”. The apex court said that the relocation plan prepared by a team of experts was in accordance with international norms. So why did matters move at snail’s pace?

For one, Prime Minister Narendra Modi during his stint as chief minister of Gujarat had publicly opposed the idea of relocating these lions and had made it a prestige issue. With the UPA government at the centre, it suited his politics as well. Now with Modi as prime minister, there is a veil of silence over this issue. Even a contempt petition failed to stir the official machinery. The official answer is that preparatory studies need to be carried out and are underway. Even retired bureaucrats and forest officers, who are vocal in private, refuse to come on record, fearing retribution.

As media reports of the lion fatalities created a furore, Gujarat brought GK Sinha, principal chief conservator of forests of the state, to face hostile media fire. Sinha claimed that six of the 11 Asiatic lions found dead during the last 11 days were killed by infighting. The cause of death of the remaining five is “yet to be ascertained”. He added that five other lions injured in the infighting had been rescued and moved to safer places.

The cover-up had gaping holes because Sinha said that all the carcasses, found largely in the Dalkhania and Jasadhar range in the heart of the lion sanctuary, were in a highly decomposed state and it took time for the forest officers to even identify their gender. More­over, territorial battles largely involve males and not females of the species.

As lions continued to drop dead, the “infighting” excuse stood exposed. After that, it was Rajiv Gupta, additional chief secretary, forests and environment, Gujarat, who confirmed that four of the 21 deaths had been caused by Canine Distemper Virus (CDV), while 17 had succumbed to babesiosis protozoa infection carried by ticks and found on cattle and canines in the wild.

“This is much, much more serious than is being made out and there is every chance that it has spread to other wildlife species like foxes,” said a top retired forest officer. In 1994, lions in Serengeti, Tanzania, suffered from an outbreak of CDV and out of a population of 2,500 lions, 1,000 were wiped out, according to reports.

Sadly, warnings were not heeded in Gir. In 2007, when a lion carcass tested positive for the highly contagious PPRV virus, two animal research institutes had suggested immediate disease surveillance. Regarding these diseases, Gujarat was forewarned twice—in 2011, by the Centre for Animal Disease Research and Diagnostics, Bengaluru, and later by the Indian Veterinary Re­search Institute—about the presence of PPRV. Four lions sent to Etawah’s lion safari park in Uttar Pradesh were dead of CDV by 2016.

Even the money allocated for these lions is not enough. In reply to a question asked by Congress MLA Bhaga Barad, the government said only Rs 31.82 crore had been allocated for lion conservation between April 1, 2013, and March 31, 2018. Another question on long-term conservation plans for lions elicited the reply that Rs 48 crore was sought from the centre over the last five years and it had so far allocated only Rs 6.23 crore.

Dr Manish Doshi, Gujarat Pradesh Congress Committee spokesperson, told India Legal: “The then chief minister, Modi, was very fond of hauling the Manmohan Singh government over the coals regarding injustice to the state. Now, when the shoe is on the other foot, the pinch does not invite a squeal.”

The Gujarat High Court-appointed amicus curiae’s report submitted recently provides ample evidence of the government’s casual approach to lions and habitat conservation. To cite an example, in its first affidavit, the state government said there were 30,000 open wells in the sanctuary and in the second one, it claimed there were 50,517 open wells. Open wells are death traps for lions. “An increase of 20,517 needs an explanation,” the report said. It also said that an explanation was needed from the government for an allocation of only Rs 90,000 per lion against Rs 9 lakh per tiger. Another key recommendation is declaring the entire area an eco-sensitive zone as a no-mining zone.

Sand and limestone mining is rampant and falls in the natural corridor of the lions. It flourishes with official and political connivance. Wildlife activist Amit Jethva, who had opposed illegal mining in Gir, was shot dead outside the High Court on July 20, 2010, and the then BJP MP from Junagadh, Dinu Bogha Solanki, was arrested by the CBI in this connection in 2013.

Interestingly, the standing committee of the National Board for Wildlife in its meeting on March 27 this year gave the go-ahead for limestone mining by a private company on 417 hectares at Sujala and Jagatiya villages, just about six kilometres from the sanctuary. This was allowed even though the Gujarat High Court had put a stay on the final notification of the eco-sensitive zone (ESZ) of the Gir Protected Area.

The stay was imposed while hearing a PIL in 2017 when the Gujarat government submitted a proposal to the centre for reducing the eco-sensitive zone from 3.33 lakh hectares comprising 291 villages surrounding Gir to 1.14 lakh hectares consisting of 191 villages. Sujala and Jagatiya villages were part of the ESZ as per the earlier demarcated area, but were removed in the new proposal. The movement of hundreds of tractors at Shingodha through the sanctuary and the transfer of officers who insisted on official orders is a sordid story of criminal culpability.

Strangely, the story of Gir’s lions is full of contradictions. Lions are one of the mainstays of Gujarat tourism. Yet the government spends just a fraction on them as compared to tigers and tourism. Not only has the state government not added a single new protected area in the last 10 years, it has moved to reduce the ESZ around Gir by almost two-thirds. Even governor of MP and former CM of Gujarat Anandiben Patel was in the news over Gir as in 2016, it was alleged that her daughter’s business associates were granted 250 acres near the sanctuary at Rs 15 a metre!

While the usual noises will be made over the present tragedy, the ultimate losers are the hapless lions.