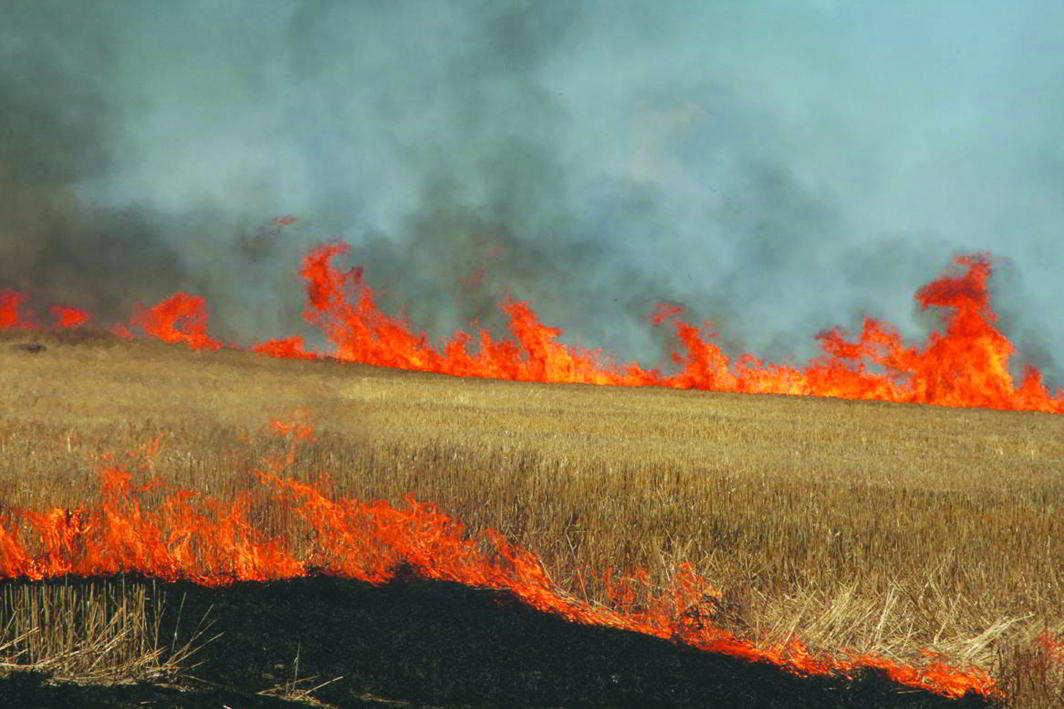 In an attempt to stem the serious problem of paddy straw being torched by farmers, the Punjab government has laid down strict orders to punish violators and will hold educative meeting with stakeholders

The Punjab government has shed its complacency and advised district administrations to act against farmers burning paddy stubble in fields, including imposition of fines and denial of loans. Last year, the Akali Dal government had ignored the polluting activity, despite tell-tale signs in fields, as it was facing elections and did not wish to risk aggravating the farming community. Farmers were still recovering from losses caused by the slump in basmati prices and the failure of the cotton crop owing to a devastating attack of whiteflies the previous year.

In an order issued, in late September, the Punjab government has told revenue officials to note violations in red ink in the land record of defying farmers. Restrictions have been imposed on many others.


Government officials risk disciplinary action if they burn stubble in their paddy fields. They are also required to dissuade others and report violations. Staff of schools, public and private, including non-teaching ones, have been instructed likewise. Canal patwaris, junior engineers of the electricity department and pollution control board officials have been told to keep a watch in their jurisdictions. Elected panchayat members are to take a pledge against stubble burning in the prescribed format. Commission agents at regulated mandis have been told to desist and report violations. District collectors have been instructed to hold educative meeting with farmers and officials.

It was in October 2013 that Punjab had passed an order against burning of crop residue. The National Green Tribunal too ruled against stubble burning in its order of December 2015.  But there has been little action.

Bhatinda’s additional district collector Sheena Aggarwal had called a meeting of farmers and had persuaded and warned them against burning stubble in fields, said Jagtar Brar, an educated and progressive farmer of village Mehma Sarja near Goniana Mandi in Bhatinda. Brar said he had suffered a loss of Rs 50 lakh earlier this year due to a slump in prices of potatoes, which he had grown on 60 acres. Therefore, he had planted rice on 85 acres, some of which he had leased. Brar has taken a pledge not to burn paddy stubble “as a responsible citizen”. He admitted that the practice “destroys bio-flora and depletes the fertility of soil”.


Despite the financial pinch, Brar has bought a mulcher and a reversible plough for Rs 4 lakh, which will neatly cut the foot-long stubble left after combine harvesting and incorporate it in the soil after chopping. Brar would have hired the machines but they are not being rented out, he said. Brar intends to grow potatoes next. Paddy straw in the soil gives the tubers a nice sheen and also allows them to bulk up. But he also intends to grow wheat on larger area, saving some from the potato crop.

Brar says he has not got “a single rupee as subsidy” though the Punjab government had in a press release listed the number of straw management machines it had subsidised. The state is also educating farmers through films on why they should not burn stubble and how they can deal with it in non-polluting ways.

The governments of Punjab, Haryana, Uttar Pradesh and Rajasthan are under orders from the National Green Tribunal to check the burning of crop residues in fields. They have been told to impose a graded fine, based on the size of holdings, and also give a subsidy for the purchase of machines like seed drills.


Punjab usually produces about 22 million tonnes of paddy straw, according to a handbook of Punjab Agricultural University (PAU). The quantity may be less this year because early maturing varieties of rice, which are shorter, are being preferred.

Not all the straw is burnt in fields. Basmati straw can be fed to cattle. The straw of ordinary rice is used to produce electricity, though its high silica content reduces boiler efficiency. Some of it is fermented in digesters to produce cooking and auto gas. It is assumed that 15 million tonnes goes up in smoke.

A large number of farmers from Punjab gathered outside the National Green Tribunal in Delhi on October 4 to protest over the stubble-burning issue and lashed out at the Punjab government. Furious with it for not repaying them enough for removing the stubble, they told India Legal that they were under colossal losses due to the NGT forbidding stubble burning.

Meanwhile, the NGT pulled up the Punjab government for not taking sufficient measures to help the farmers in disposing of the stubble —a major reason for air contamination during the reaping season. Prior to this, the NGT had told the state to embrace a town in Patiala and motivate farmers there and to give them infrastructural help. “As on date, have you possessed the capacity to discover a solitary agriculturist whom you have offered motivating force to stop stubble copying? Reveal to us where are those ranchers? Demonstrate to us that you have met individuals and given them the endowment,” said the bench headed by NGT chairperson Justice Swatanter Kumar. “We are truly worried about this.”

The farmers alleged that the administration was acting like a wild bull and taking superfluous correctional activities against poor farmers. They asked why they were being penalised when the general population burnt firecrackers during Diwali leading to excessive smoke.

PAU vice-chancellor Baldev Singh Dhillon said farmers have been given a menu of choices at the seven annual kisan melas held in September and March. Paddy straw can be spread as mulch in orchards to retain moisture and suppress weeds. Farmers following the rice-potato system can incorporate it in the soil. It can also be used to grow mushrooms. Composting is a good option but needs scarce and costly labour. The university has been working on microbial decomposition using fungi and urea. With this method, paddy straw decomposes in about six weeks. That is too long because farmers have a wedge of three weeks between the third week of October and the middle of November to sow wheat. A day’s delay beyond that means a loss of output of about 23 kg per acre due to terminal heat in March.

For those planting wheat after rice, conservation farming is a neat option. It is being demonstrated for the past five years at the Borlaug Institute for South Asia (BISA), which has been set up at Ludhiana by the Indian Council of Agricultural Research and Mexico’s International Centre for Maize and Wheat Improvement, where the father of the Green Revolution, Norman Borlaug, developed dwarf wheat varieties.

In this system, wheat is sown while rice is harvested. With a device at the ejection vent of conventional combines, straw is shred and spread evenly in rice fields. This is grandly called the super straw management system. An attachment hitched to a tractor called Happy Seeder, which follows the combine, cuts 4-5 cm deep slits in the straw-covered fields and sows wheat in them along with fertiliser. The straw acts as mulch. It conserves moisture and suppresses weeds. Over time, it degrades naturally and adds to the soil’s organic carbon content.

Harminder Singh Sidhu, who is in-charge of BISA’s station in Ludhiana, said there was a “lot of movement among officials, farmers and manufacturers” to check stubble burning. According to him, conservation farming is catching on. PAU has given the design of the straw management device to about 20 manufacturers, he said, for a one-time fee of Rs 30,000 and free testing of prototypes. There may be an equal number of copycat manufacturers, he said. He estimates that 1,500 combines have been equipped with the straw management device and another 500 are likely to be fitted before the start of the wheat-planting season.

That is about a sixth of the combines in operation in Punjab. Until last year, he said, only two combines in the state were equipped with the device. Sidhu estimated there were about 20 manufacturers of Happy Seeders as well.

With conservation agriculture, farmers save about Rs 3,000 an acre which they would have otherwise spent in cutting and chopping the straw and ploughing into the soil. The Happy Seeder was developed by a PAU team with funding from the Australian Centre for International Agricultural Research. (Sidhu, who was part of the team, says it is called Happy Seeder because it obviates smoke-induced tears!) It has gone through five iterations. The current one can operate early in the day when morning dew makes the soil hard to work upon.

Meanwhile, farmers’ unions have made the issue a bargaining chip. Their demand for a subsidy on straw-management equipment is legitimate but their push for debt relief is not.

Punjab farmers need to practice sustainable agriculture. They have made it an extractive activity, overdrawing groundwater, depleting the soil of its nutrients and fouling up the air. Not a wise move at all.