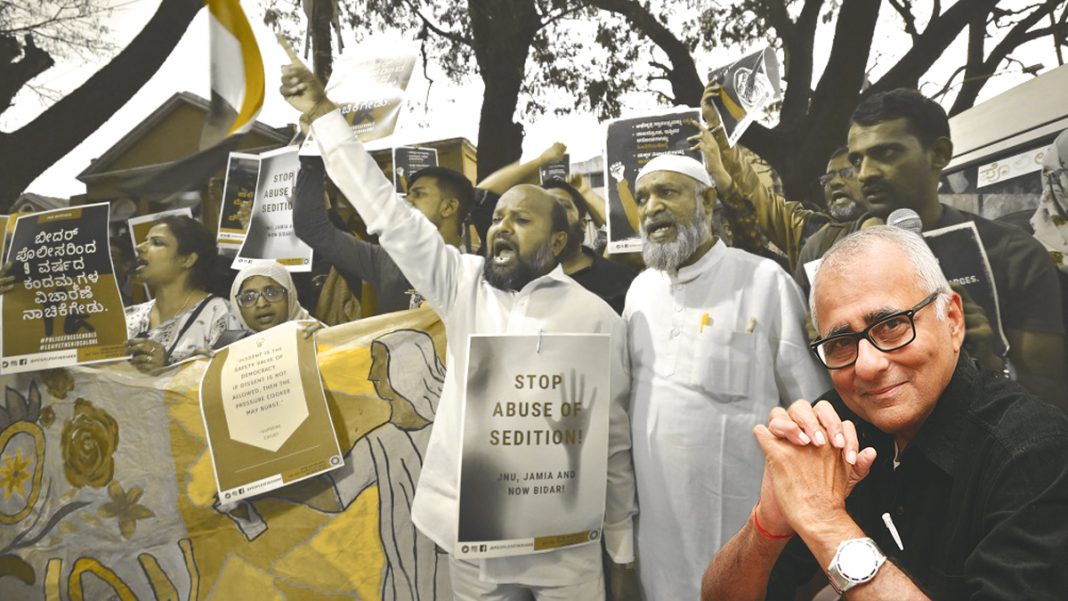 Despite the hue and cry that reverberates about the validity and legitimacy of sedition laws whenever the government machinery leans heavily on them as a tool for the suppression of dissent, I doubt that notwithstanding their misuse for gagging free speech, they will ever be stricken from the books.

This is because governments, no matter how loudly they may scream when their parties are in the opposition, invoke and use draconian rules to deter challenges to their authority when they are in power. And the courts, while interfering in habeas corpus matters and protected speech, will rarely overturn or revoke laws and legislation even if they border on the infringement of civil liberties.

Courts are generally conservative. They believe such matters are in the purview of the legislature. You may argue with this, but this doctrine falls within what is known as “strict constructionism”.

And so it goes with prosecution under Section 124A (sedition) of the Indian Penal Code. This sedition law, under which Gandhi and his freedom fighters were repeatedly jailed, has been reviled and condemned as anachronistic and an imperialist hand-me-down. It has also been challenged in court. But it still flourishes. And it is once again in the news because the government has used it as a handy legal weapon against many of its critics, including climate activist Disha Ravi, supporting anti-government protests such as the farmers’ agitation.

I doubt that the Supreme Court will budge from the stand it has already espoused on the sedition issue. It last surfaced in 2016. Newspaper headlines suggested that the apex court had taken a massive leap forward in granting relief to some petitioners seeking to unshackle India from the sedition law.

Actually, the judges—Dipak Misra and Uday Umesh Lalit—declined to deal with four specific reliefs sought by the petitioner—and chose to reiterate the larger principles of law laid down by a Constitution Bench of the Supreme Court in 1962.

In summary, the petition sought that police officers receiving a complaint under the sedition section shall not register an FIR before obtaining the written consent of the Director General or Commissioner of Police.

The petitioners argued that the law of sedition was made by the British and was used against freedom fighters, and that the wording of Section 124A is such that it is often misused and FIRs are registered rampantly.

The petitioners asked the court:

“a. Issue an appropriate writ making it mandatory for the concerned authority to produce a reasoned order from the Director General of Police (DGP) or the Commissioner of Police, as the case may be, certifying that the ‘seditious act’ either led to the incitement of violence or had the tendency or the intention to create public disorder, before any FIR is filed or any arrest is made on the charges of se­dition against any individual.

“b. Issue an appropriate writ directing the Ld. Magistrate to state in the order taking cognizance certifying that the ‘seditious act’ either led to the incitement of violence or had the tendency or the intention to create public disorder in cases where a private complaint alleging sedition is made before the Ld. Magistrate.

“c. Issue an appropriate writ directing for a review of pending cases of sedition in various courts to produce an order from the DG or Commissioner of Police, as the case may be, certifying that the ‘seditious act’ either led to the incitement of violence or had the tendency or the intention to create public disorder in cases.

“d. Issue an appropriate writ directing that investigations and prosecutions must be dropped in cases where such a reasoned order as prayed for in Prayers (a), (b) and (c) is not provided and the act in question involved peaceful expression or assembly.”

It is mystifying why the petitioners, if they did not believe in the fairness or the validity of the Section itself, chose not to challenge its very constitutionality rather than attempting to reinvent a wheel already set in motion by the Supreme Court itself in 1962 in the Kedar Nath Singh vs State Of Bihar.

“It is well settled that if certain provisions of law construed in one way would make them consistent with the Constitution, and another interpretation would render them unconstitutional, the Court would lean in favour of the former construction. The provisions of the sections read as a whole, along with the explanations, make it reasonably clear that the sections aim at rendering penal only such activities as would be intended, or have a tendency, to create disorder or disturbance of public peace by resort to violence. As already pointed out, the explanations appended to the main body of the section make it clear that criticism of public measures or comment on Government action, however strongly worded, would be within reasonable limits and would be consistent with the fundamental right of freedom of speech and expression. It is only when the words, written or spoken, etc. which have the pernicious tendency or intention of creating public disorder or disturbance of law and order that the law steps in to prevent such activities in the interest of public order. So construed, the section, in our opinion, strikes the correct balance between individual fundamental rights and the interest of public order. It is also well settled that in interpreting an enactment the Court should have regard not merely to the literal meaning of the words used, but also take into consideration the antecedent history of the legislation, its purpose and the mischief it seeks to suppress….Hence, these provisions would not exceed the bounds of reasonable restrictions on the right of freedom of speech and expression. It is clear, therefore, that cl. (2) of Art. 19 clearly saves the section from the vice of unconstitutionality.”

As of now, that’s the way it is. Justices Misra and Lalit refused to interfere in any manner except by reiterating that the authorities while dealing with cases under Section 124A of IPC would do so guided by the principles laid down in Kedar Nath’s case. After hearing the arguments from both sides, the judges observed:

Finally, the Court held that there was no need for interference by the Court and stated that the law laid down by the Constitution bench in Kedar Nath Singh vs UOI shall be followed. Curiously, the Court denied the petitioners’ request that the order shall be communicated to the chief secretaries of the states.

The Court concluded: “We are of the considered opinion that the authorities while dealing with the offenses under Section 124A of the IPC shall be guided by the principles laid down by the Constitution Bench in Kedar Nath Singh vs State of Bihar (1962). Except saying so, we do not intend to deal with any other issues as we are of the considered opinion that it is not necessary to do so.”