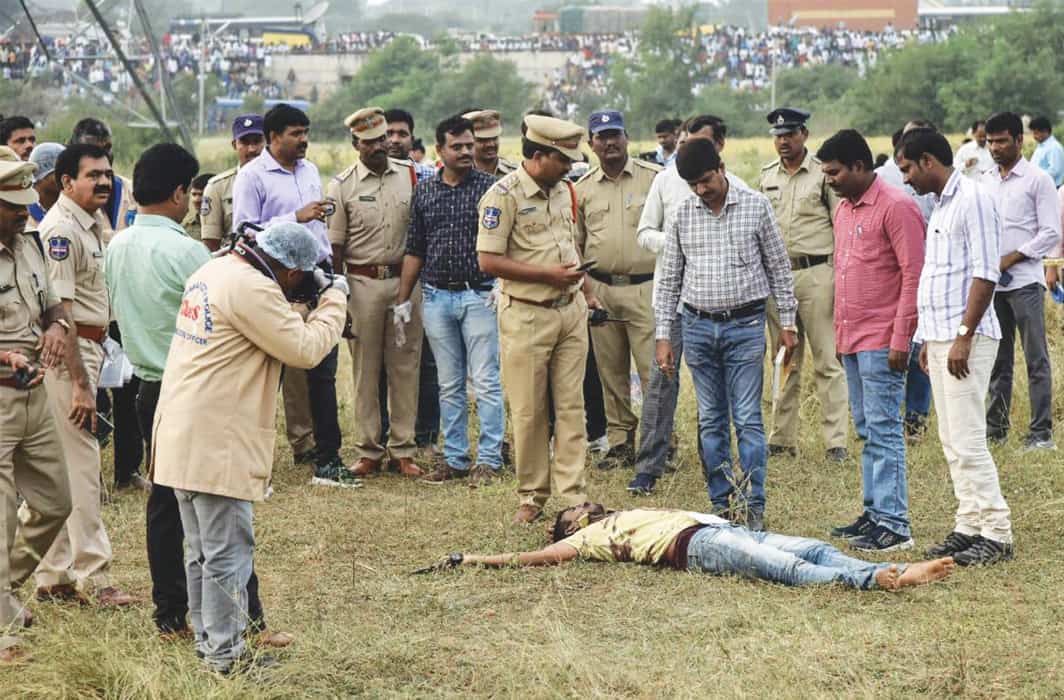 While people whistle and clap when seeing a film where dreaded criminals are killed in an encounter, in real life, such incidents should make one question the way justice is dispensed. The killing of gangster Rakesh Pandey once again brings the spotlight on the police taking the law into its own hands

Encounters are often shrouded in controversy and that of history-sheeter Rakesh Pandey in Lucknow on August 9 was no different. A plea has now been filed in the Supreme Court seeking issuance of specific directions in Pandey’s custodial killing/encounter and for registration of an FIR under Sections 302, 201, 120-B, 193 of the IPC against the police officials involved.

The petition has been filed by advocate Vishal Tiwari and seeks the setting up of a commission headed by a retired judge of the apex court to inquire into and probe the said killing. Pandey, alias Hanu­man Pandey, was gunned down by the Uttar Pradesh Special Task Force (STF). He had a reward of Rs 50,000 on his head and was allegedly involved in the killing of Krishnanand Rai, a BJP MLA from UP, in 2005.

After the encounter, the STF claimed that it was tipped off about Pandey’s presence in Lucknow and that when the police tried to stop his SUV, he refused to do so and instead fired at the police. Then Pandey’s SUV collided with a tree.

The STF added that they had to fire back in self-defence but they did so in a controlled manner and once the firing stopped, Pandey was taken to Sarojini Nagar community health centre where he died.

Pandey’s family has claimed that the encounter was staged and has also asked for a CBI probe into it. His son has claimed that earlier his father had developed breathing problems and was admitted to a private hospital in Gudamba. A police team reached there and took his father with them after asking others around him to leave. They destroyed Pandey’s medical documents and damaged CCTV footage in the hospital.

The petition in the Supreme Court has alleged that for the last so many years, the police failed to trace Pandey and suddenly, in present times when encounters are in vogue in UP, they received information about his whereabouts and killed him. The entire incident, according to the petitioner, appears to be false and is an extra-judicial killing, suppressing the rule of law.

The plea said that 90 percent of encounter cases have been proved fake or doubtful. While the public doesn’t support criminals in society, it also does not support the police committing illegal activities.

There have been other shocking encounters. On July 9, a dreaded criminal from Kanpur, Vikas Dubey, was killed in an encounter by the UP STF, a week after he shot down eight UP policemen in Bikru village near Kanpur. It was alleged that his killing was done in order to erase some information as he was a well-known criminal with political links. According to the police, the car carrying Dubey overturned, after which he attempted to flee and got injured in retaliatory fire by the police.

Another case was the Telangana encounter case of December 2019 when four men accused of gang-raping a veterinarian and burning her to death in Hyderabad were shot dead. According to the police, the accused men were taken for reconstruction of the crime scene where they tried to escape and began pelting stones at the police, after which the police had to fire in self-defence. The encounter was followed by a huge crowd gathering on a bridge that overlooked the spot and cheering the police, with some showering rose petals. The incident was hotly debated for days with some believing that it gave women a sense of relief while others said that justice should be meted out through the judicial process.

In October 2016, eight SIMI activists were shot dead after they had allegedly escaped from the Bhopal Central Jail. According to the police, they died in cross-firing after they were asked to surrender, but, instead, they began firing at the police and the public. However, some videos surfaced online suggesting that the encounter could have been staged. The police was, however, given a clean chit in 2018 by the judicial commission formed to investigate the matter.

In 2009, the Manipur police killed 27-year-old Chungkham Sanjit in an encounter. He was suspected to be a member of the People’s Liberation Army. Also killed was a 23-year-old pregnant bystander. The operation led to many protests in Manipur after photos were released.

According to the police, Sanjit was killed after he fired at a group of policemen. However, six years later, head constable Herojit Singh confessed that he had shot the deceased who was “not armed”, thereby contradicting the statement of the Manipur Police.

The 2008 Batla House case was one of the most sensational ones, with even a film being based on it. The Delhi Police had carried out an encounter there, killing two people, who, according to the police, were responsible for multiple blasts in Delhi a few days earlier. The police had alleged that the two people, including a student of Jamia Millia Islamia University and a Class XI student, were suspected Indian Mujahideen terrorists.

The operation, which was only meant to gather information from people living in the area regarding the blasts, turned into a 20-minute shootout. Several accusations were raised against the police. The National Human Rights Commission, however, gave a clean chit to the police after its investigation.

Then there was the famous Ishrat Jahan case, where a 19-year-old and three others were killed by the Gujarat Police on June 15, 2004. According to the police, the four were operatives of the LeT and were plotting to assassinate the Gujarat chief minister. According to a Metropolitan Court in Ahmedabad and the SIT formed by the Gujarat High Court, the encounter was staged. The CBI also in its initial charge sheet said that the shooting was a staged encounter in cold blood.

The Supreme Court, while dealing with petitions questioning the 99 encounter killings by the Mumbai Police in PUCL vs State of Maharashtra (2014) had laid down guidelines regarding the standard procedure to be followed for investigating police encounters. The Court mandated registration of FIR and an independent probe, a mandatory magisterial inquiry along with information to the National/ State Human Rights Commission. The Court also asked the guidelines to be strictly observed in all cases of police encounters by treating them as law declared under Article 141 of the Constitution.

While people whistle and clap when seeing a film where dreaded criminals are killed in an encounter, in real life, such incidents should make one question the way justice is dispensed. Giving police officers a free hand to do so isn’t just arbitrary but also disregards the fundamental principle of rule of law.

Lead Caption: The body of an accused in the veterinary rape and murder case. Photo credit: UNI