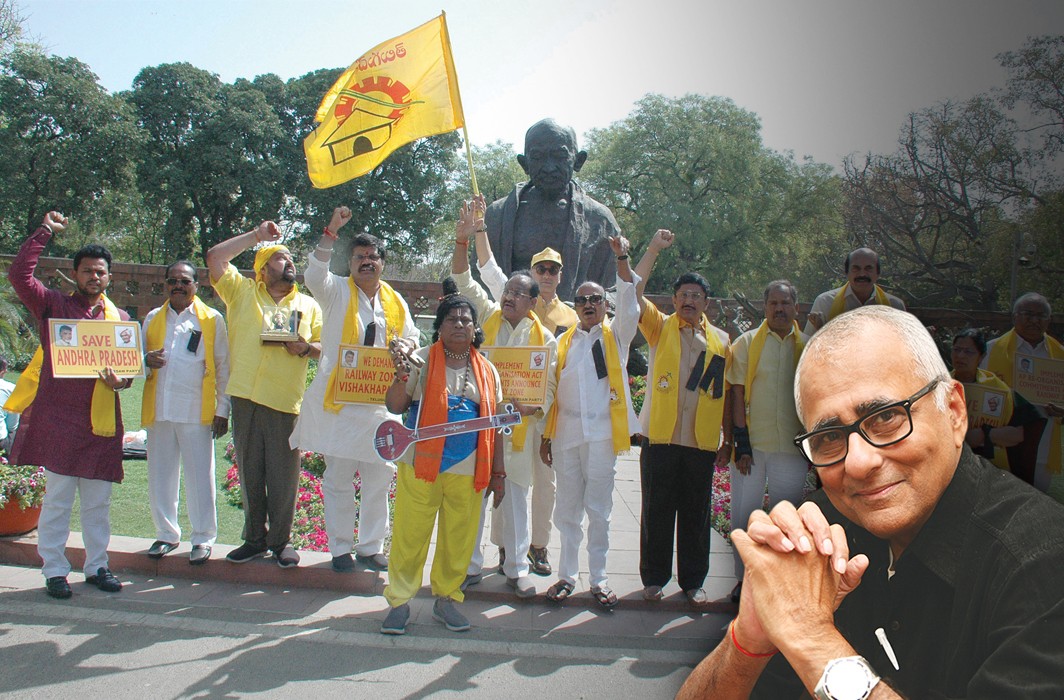 Andhra Pradesh supremo N Chandrababu Naidu has all but called it quits with his alliance partner, the BJP, over the issue of “special status” for his state. Political compulsions may well have prompted the ruling party to grab the TDP as an NDA partner. But the relationship came at a price that the Sangh ideologues are unwilling to pay. Taking advantage of the Telangana-Andhra split to shore up its majority in Parliament was the easy part. What the reigning dispensation finds difficult to swallow—or at least to acknowledge in public—is the “special status” concept. It goes against the grain of the RSS’s Akhand Bharat dogma which is in direct conflict with the philosophy of increased federalism and greater autonomy for states.

The BJP also finds this demand in sharp conflict with its own vote-catching narratives of the unfolding of India’s modern history. Among the most effective of these is that Kashmir enjoys a special status because of the Congress’s appeasement of the Muslim-majority state and the benefits conferred on it through Article 370. This is an important example of how distortions and half-truths become obstacles in the path of peaceful and progressive solutions.

The common refrain of the RSS is that “special privileges” given to the Kashmiris (read Muslims) have prevented the Muslim majority state’s “full integration” with India. That is itself a lie. As I noted in an essay in this same space last week, the truth about Kashmir is that it is as integrated with India as any other state—geographically, politically, economically. A large number of its people may be emotionally alienated from India, but legally its accession is un-questionable under the terms on which the state handed over defence, foreign policy, currency, communications in 1947, and later became a part of the Indian Union under the Indian Constitution’s Article 370, a perfectly valid document which recognised the various articles and covenants which were signed with the erstwhile Maharaja and later, the United Nations.

Why a large portion of Kashmiri Muslims are alienated (and not all of them are secessionists) is another matter. What does matter is to recognise that Kashmir’s special status is neither illegal nor an aberration. It is perfectly within the law. When the Union of India was formed, there were some 560 states and principalities—actually separate countries—which coalesced to form the new nation.

The founding fathers recognised the need for great flexibility in order to glue together a fledgling nation composed of states more diverse in tradition, language, social groupings and customs than Europe. Part XXI of the Indian Constitution, “Temporary, Transitional and Special Provisions”, includes, apart from Article 370—Temporary Provisions with respect to the State of Jammu and Kashmir—special provisions for 11 other states, listed under Articles 371, 371A-H, and 371J.

Articles 2 and 3, which come under Part-I of the Constitution dealing with the Union (i.e. the Indian Union) and its territory, are of particular significance. Article 2 provides for the admission or establishment of new states (which were previously not part of India), e.g. Sikkim; whereas Article 3 provides for the formation or changes in the existing states of India, e.g. Chhattisgarh, Telangana.

But here’s what’s important: These states can be admitted or established “on such terms and conditions as it thinks fit”. In other words, any state can be given special status by Parliament in accordance with its historical, geographical or political circumstances. And it is within these words that lie the beauty and wisdom and flexibility of the Indian federal structure.

For example, as a recent analysis in The Indian Express reminds us, Parliament can’t legislate in matters of Naga religion or social practices, the Naga customary law and procedure, administration of civil and criminal justice involving decisions according to Naga customary law, and ownership and transfer of land and its resources without concurrence of the legislative assembly. This provision, similar in nature to Article 370, was inserted in the Constitution after a 16-point agreement between the centre and the Naga People’s Convention in 1960, which led to the creation of Nagaland in 1963. Also, there is a provision for a 35-member regional council for Tuensang district, which elects Tuensang members to the assembly. A member from Tuensang district is minister for Tuensang affairs and the governor has the final say on Tuensang-related matters.

There’s more: Article 3 provides for the Parliament to:

(b) increase the area of any state;

(c) decrease the area of any state;

(d) alter the boundaries of any state;

(e) alter the name of any state.

According to a newspaper analysis, while the special provisions laid down in Articles 371, 371A-H, and 371J are not as far-reaching as Article 370, “the existence of these provisions shows that other princely states, too, negotiated the terms and conditions of their entry into the Union, or sought special constitutional protections in view of their unique needs and conditions. Each of these constitutional provisions is, in fact, rooted in historical reasons.

Parliament is also prohibited from making  laws on “religious or social practices of the Mizos, Mizo customary law and procedure, ad-ministration of civil and criminal justice involving decisions according to Mizo customary law, ownership and transfer of land… unless the Legislative Assembly… by a resolution so decides”.

According to the Indian Institute of Policy Research and Studies, the concept of a special category state was reiterated in 1969 when the Fifth Finance Commission sought to provide certain disadvantaged states preferential treatment in the form of central assistance and tax breaks. Initially, three states, Assam, Nagaland and Jammu & Kashmir, were granted special status but since then, eight more have been included (Arunachal Pradesh, Himachal Pradesh, Manipur, Meghalaya, Mizoram, Sikkim, Tripura, Karnataka, Maharashtra and Uttarakhand).

The rationale for special status is that certain states, because of inherent features, have a low resource base and cannot mobilise resources for development. Some of the features required for special status are: (i) hilly and difficult terrain; (ii) low population density or sizeable share of tribal population; (iii) strategic location along borders with neighbouring countries; (iv) economic and infrastructural backwardness; and (v) non-viable nature of state finances.

The demand for special status by Chandrababu Naidu for Andhra is perfectly valid under the law and the movement towards greater federalism. Andhra was divided into Telangana and residual AP in 2014. PM Manmohan Singh promised that residual AP would be given special status for five years and the opposition party, the BJP, also stated that it would extend it to five more years if it formed the government at the centre.

The state is facing an economic crisis and needs to build a new capital. As a special- category state, it would receive benefits like 90 percent grants and 10 percent loans; while for normal states, these are 70 and 30, respectively; concession of excise duty (to attract industrial investments); and reference in central financial assistance.

Naveen Patnaik in Odisha is pitching for the same, and now so is Bihar. There’s a lesson in all this as the new general election approaches. The tested formulae of catching votes and capturing power through divisive religious and caste appeals and alliances could well become subservient to the emerging appeal of greater regional empowerment and the consequent shifting of alliance goalposts at the centre.

It looks as if our Founding Fathers, well apprised of the diversity of this country, had foreseen this as a future possibility and deliberately designed the Constitution to anticipate and absorb these shocks through orderly democratic means.